Tasting menus, like a recent one at 5 Fusion, offer chefs a chance to play

We can blame—or thank—chefs Ferran Adria (El Bulli in Spain) and Thomas Keller (French Laundry in Napa Valley) for the rise in popularity of the tasting menu, a careful sequence of dishes served in smallish portions during a single meal. Recently I experienced the tasting menu at 5 Fusion & Sushi Bar, where Chef Joe Kim curated a menu with the theme, "America's Culinary Melting Pot." I left the delicious eight-course meal—10 if you include the amuse bouche and sorbet—with my stomach like a stuffed turkey at Thanksgiving. 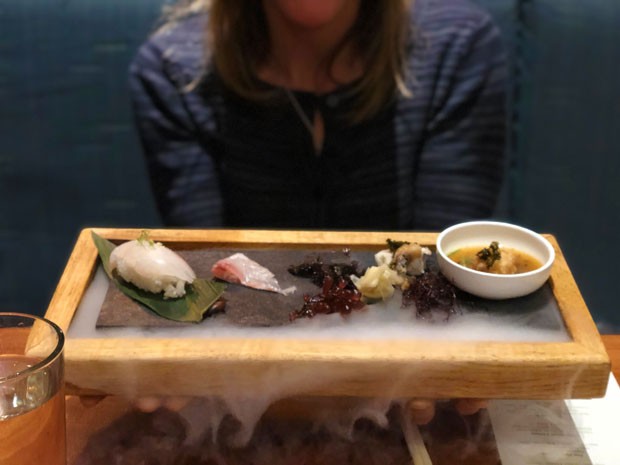 I can see where Anthony Bourdain was coming from when he expressed mixed feelings toward tasting menus in his book, "Medium Raw." He comically mused about attending one as a romantic experience. You stare at your sweetheart with breathless anticipation, but at the end of the dinner, Bourdain says your date is "counting the seconds till she can get away for a private moment or two and discreetly let loose with a backlog of painfully suppressed farts." He goes on to say sexual athleticism dissolves well before the dessert course—but what he's really getting at is that the time and sheer volume of food leaves one exhausted.

Instead of remembering each tasty morsel, you remember bits and pieces, but can't forget how full or how drunk you were from the wine pairings. I can agree with Bourdain a little. Feeling stuffed, drunk and leaving with an overwhelmed palate is real, but then again, chefs need this type of outlet.

It's no different than the artist who creates a popular style of artwork and has to keep producing the same genre. Flowers are popular. Gallerists only want flowers. But the artist wants to paint frogs. Likewise, I'm sure chefs get sick of busting out the same dishes over and over—much like the rock star who has to sing their popular hit song again and again. 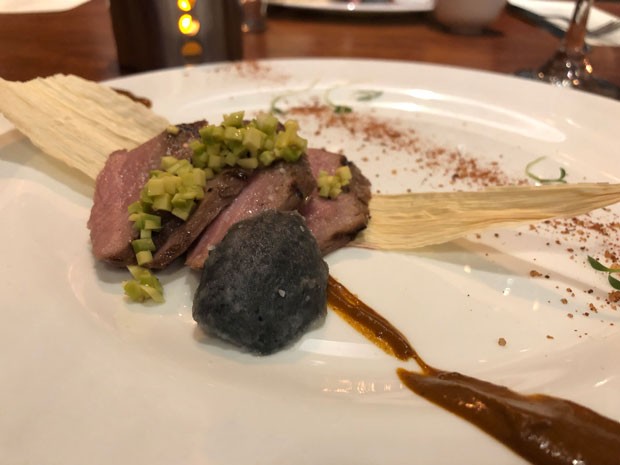 A tasting menu is a chef's opportunity to explore and play, to step outside of their food genre. If it weren't for a night like this recent James Beard Foundation benefit dinner, Kim probably wouldn't have played with a meal blending the cuisines of Korea, Japan, China and India with those of Britain, France, Russia and Mexico. The James Beard Foundation's Director of House Programming, Izabela Wojcik, was also on hand to promote the organization's impact-oriented initiatives, including the Women's Leadership Programs geared at addressing gender imbalance in the industry. 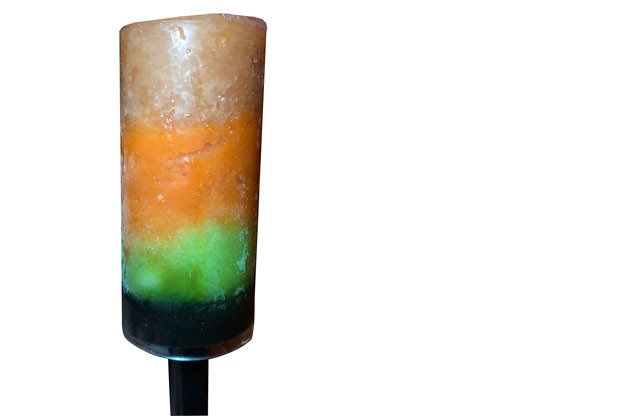 I tasted dishes I've never had and may never have again. Kim used the menu to wow guests with different tastes, visual tricks and unusual ingredients.

The meal started with an amuse bouche, a single bite to stimulate the palate, of a white chocolate sphere filled with crème fraiche and caviar dotted with a fresh flower petal. A kaiseki, or traditional multi-course Japanese dinner, turned into a single dish in which Japanese striped bass came raw, fried, grilled and cured with various seaweed on a long plate overflowing with dried ice. Homey Indian butter chicken was transformed into haute cuisine as a sliced chicken roulade, served with a single, tiny disc of naan. Flying ants were sprinkled like seasoning alongside sliced Iberico pork in a mole of cashews, chocolate and foie gras. A layered popsicle of tangy Greek salad, earthy carrot and cool celery sorbet served as a palate cleanser. The sorbet tasted exactly like Greek salad, but in liquified, frozen form.

The finale was the real pièce de resistance. Candles were lit. Kim, accompanied by Sous Chef Erik Barrin, assembled each plate of Mom's chocolate, sesame and espresso bundt cake tableside, placing dishes in front of each guest. The chefs then picked up the candles and poured them onto the cake, revealing they'd been the coconut caramel sauce for the dessert. Fellow diners and I gasped in delight.