A "Mix Tape" of Beloved Musicians

Since the Bend City Council relaxed its mural code in 2019—allowing murals to be painted on buildings outside the Maker's District—the area where the previous code limited them—public art has proliferated in Bend. Murals now adorn hotels, underpasses, schools and private businesses, with more popping up all the time. One project—located just outside the bounds of the Maker's District—is the mural at Silver Moon Brewing, two years in the making. Titled "Mix Tape A & B," the stunning mural depicts an array of beloved musicians from Tupac Shakur to Lady Gaga; from Aretha Franklin to Bob Marley, as well as Central Oregon favorites including MOsely WOtta. 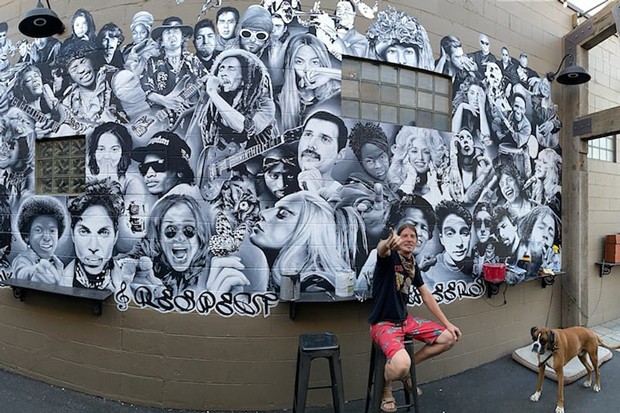 The artists chosen, Hoogen said, "are all wonderful human beings. But the hidden metaphor here is to show the human race together. I wanted everyone to see unity, because music brings us together."

Hidden themes make looking at the mural extra fun. In one corner, Alicia Keys, Howlin' Wolf and Kenny Rogers are howling at a "silver moon," and are surrounding David Bowie, depicted with his eyes closed and his hands up, plugging his ears. Rapper Eazy-E is seen drinking a Silver Moon beer. Crowd favorites also made it in. For example, Animal from "The Muppets" is seen raging on drums—a character that a Bend local encouraged Hoogen to include.

“We’ve never seen it done before on the grand scale Erik and we had in mind of trying to pull off.” —Erik Hoogen tweet this

"Music has been a huge part of Silver Moon's history/culture over the past 21 years... as well as a big part of not only mine and Erik's life, but the owners Matt [Barrett] and James [Watts] as well, that it just made sense," Augustyn told the Source. "We've never seen it done before on the grand scale Erik and we had in mind of trying to pull off."

The mural took two summers—roughly eight months—to complete. As such, the two sides of the mural are referred to as "Mix Tape A" on the left, and and "Mix Tape B" at right. The mural has taken shape amid lots of other changes to Silver Moon's campus over the last several years. An expanded patio and beer garden was recently home to two stages as part of the Bend Roots Revival music festival. Also opened this year was The Office, Silver Moon's food cart pod. In February, Silver Moon hopes to see the opening of "The Green Room," a new game room and hangout that will occupy the former boxing gym just east of the existing pub.

"For us, Silver Moon is much more than just great beer, but creating a culture and experience for our guests," Augustyn said.

Mix Tape A and B, officially finished last month, is located on the east side of the Silver Moon pub, surrounding the pub's entranceway, but parts of it can be seen when driving past on Greenwood Avenue. For those entering the pub, those happy faces of legendary musicians are pretty hard to miss.