A New Gathering Space for NWX

The Grove brings indoor/outdoor dining in a spacious dining hall

A new "market hall" dining space will open later this month in Northwest Crossing, adding a wide array of new flavors to the area in one fell swoop...or rather, a few waves of swoops. The Grove, set to open May 28 at the corner of Mt. Washington and Northwest Crossing Drive in northwest Bend, is home to a 13,800-square-foot market hall containing nine spaces for food vendors, along with a bar, called Waypoint, launching by the owners of Bend Brewing Company. Think of it as a well-designed food mall with a bar—and in the COVID era, plenty of space for hanging indoors or out.

The idea, said Christopher Jones of development firm Project PDX, was to create a gathering space for Northwest Crossing. 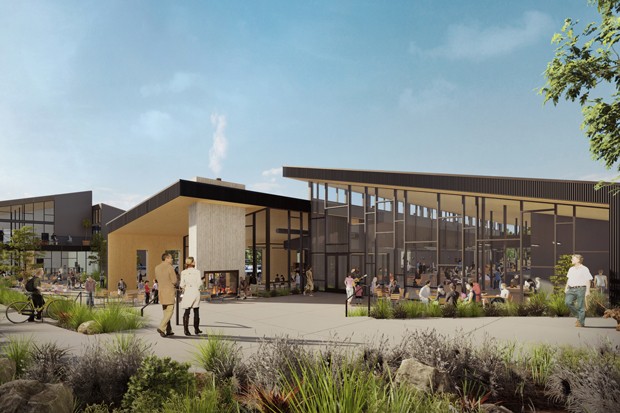 "And what better way to gather than around food and beverage?" Jones told the Source.

The Grove is part of phase 1 of a larger complex, soon to include condos and commercial spaces. Eventually, "tuck-under parking" will offer spaces underground, providing some of that much-debated parking for a town that loves to talk about parking.

Four businesses will officially open in the market hall space this month, including Elly's Ice Cream and a new Thump Coffee—its fourth Bend location—along with Waypoint, which announced on its Instagram page that it will open May 20. Outside, Italian cart Sunny's Carrello has set up shop in anticipation of opening in a permanent space in the fall. It, too, was set to open May 20.

July will bring the opening of tenants including Left Coast Burger Company, noodle shop ThAiPAS and Green Leaf Juice. In the fall, a new market, Sebastian's Seafood & Specialty Market will open, along with Sunny's in its new spot. One more spot in the market hall is still open.

For Lisandro Ramon, owner of Left Coast Burger Company—who owns another location in the Cascade Village Shopping Center, as well as The Brown Owl bar—opening in The Grove was as much about getting on board with the cool new concept as it was about the overall area's popularity, and its proximity to Summit High School.

"There's like 1,500 kids over there with open-campus lunch," Ramon told the Source. "Kids love burgers."

The Grove lends itself to spacing out those burger-lovers, too. Guests can hang out indoors, or use the outdoor dining plaza that includes an outdoor covered bar and built-in counters. Some of the vendors inside have their own walk-up windows, too. Inside, floor-to-ceiling windows bring airflow and light into the space. 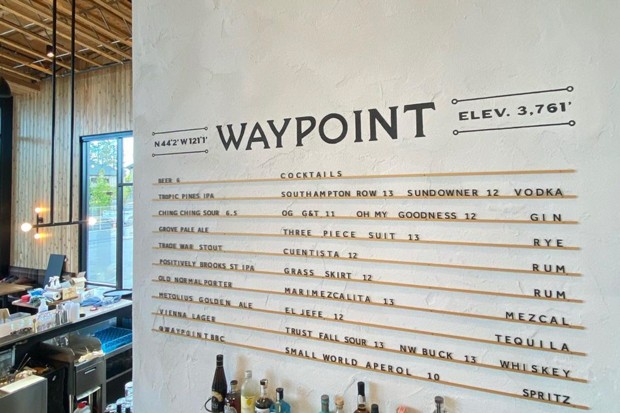 "The Grove's ambience provides the ideal mountain-modern interior for us," said Packy Deenihan, owner of Bend Brewing Company, in a release. "The large sliding doors and gas fire pits on the surrounding patio lends our new space the perfect indoor-outdoor vibe."

Jones said that since the building went up during the era of COVID, features like the walk-up windows were part of the evolution of the building. Adding more exterior openings and accommodations for more app-based ordering were COVID additions as well, Jones said.

The Grove is owned by West Bend Development Corp., which developed the neighborhood of NorthWest Crossing. Project PDX, whose other projects include Basecamp, a townhome complex near Bond and Arizona Avenues in Bend, got involved at the request of the property owner, Jones said.

With Asian, Italian, American (by way of burgers), fresh juices and seafood—plus locally produced beer—being just some of the flavors available when The Grove opens this month, it's safe to say that some of the momentum—and pull—in Bend's food scene may be shifting west this summer.