A New Home for Joe's Garage?

The company owned by Mario Andretti bought the Westside Shell property in 2017. Now the father and son who run the longtime garage are on the hunt for a new location 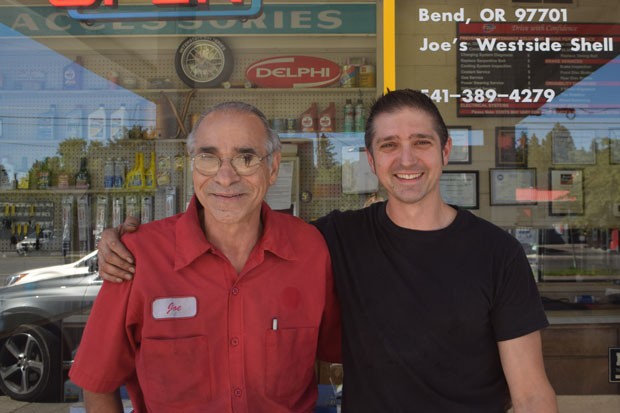 Joe Palmeri may not necessarily be a household name in Bend, but many people know who he is. Palmeri has run Joe's Garage at the Westside Shell station in Bend for 33 years — but that station may be closed before the end of the year.

Joe's Westside Shell and Joe's Garage opened in 1985. Palmeri's son (also Joe) now works alongside his father. But a recent sale and plans for a new project will leave the business without a home, and some neighbors aren't happy.

The Westside Shell station is a landmark in a busy corridor. The Palmeris' business is just one of many affected by changes happening in the city.

Palmeri says he's asked the different owners over the years if he could purchase the station, but he said, "The answer was always 'no, we don't want to sell it.'" Then suddenly, in 2017, Colvin Oil out of Grants Pass purchased the property. Colvin Oil itself was purchased in 2017 in a joint agreement between Lane Colvin and the Andretti Petroleum Group—a company owned by race car driver Mario Andretti and his son Michael, according to the company's website.

Colvin Oil did not respond to numerous requests for comment, but according to permits filed by Grants Pass construction company Double R Products, the .46 acre property will include a new Chevron station, a car wash and a convenience store.

As of this writing, 16 people submitted official comments to the City of Bend about the new car wash—all of them neighbors. Most commented on the sound produced by a car wash. 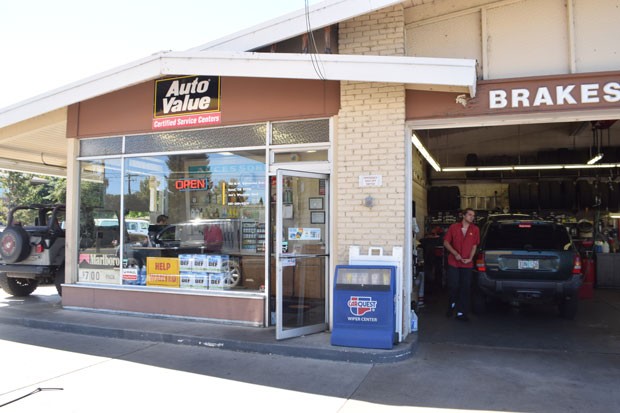 "The noise and traffic in and out of the existing gas station is no worse than the noise and traffic on busy Galveston," but "a car wash... is significantly different. This is an unacceptable use within a CC [convenience commercial] zone," one neighbor wrote. "We feel that the noise from the car wash... will be a huge deterrent on the value of our home. We also feel that living across the street from a noisy car wash will ruin the beautiful days and evenings we have the privilege of enjoying while living along the river."

Old fashioned service stations attached to gas stations are becoming rare. Palmeri said he knows of only three in the entire state. When he opened his shop in 1985, Bend was a different place. Galveston ended at 17th Street, and, he says, "There wasn't anything out this way. You get down to the end, you go about 15 blocks down, and that was the end of town right there. There was no Broken Top, and then you go south and there wasn't anything there either except for one subdivision. Now Bachelor Village is there, it's been there a long time. And that was it, there was nothing there. The town was only 18,000 at that time."

As the city has grown, so has business. After 33 years, Joe's has had hundreds of customers, many who've had their cars fixed by Palmeri, and now his son.

"It's really convenient for people, especially in the surrounding area, if they need a battery or a light bulb," he said. "You'd have to bring it to another automotive shop on the other side of town or go to the dealer. We have more of a one-on-one service, we have that rapport with all of our customers. It's a little more laid back than going to the dealer. It's a lot more personal."

Palmeri has considered retiring, although he doesn't sound like he wants to. His son has been busy looking for a new location, but with the growth in Central Oregon, prices for most locations have skyrocketed.

"We're looking to open another shop, if we can find something," he explained. "We've even looked at maybe building one, but time's getting a little behind because we may only be here a couple of months. We may end up being here until next year. I haven't got an answer."

Zoning on the west side of town doesn't allow for much automotive, so the Palmeris are looking mainly on the east side. He explained that, "It's not zoned right, and if you do find something even for lease it won't let you put a shop in. Even if money wasn't a factor, it's pretty much impossible."

According to Brian Harrington, an associate planner with the City of Bend: "Once the applicant submits the remaining documents, including the neighborhood meeting materials, pays the fee and the application is deemed complete, the city will begin the formal review process."

Once the permit is filed, a notice will go out to the neighborhood association. There will then be another public comment period.

The Palmeris said if the permit is denied, they aren't sure what will happen. If Colvin Oil lets them stay, they will.

"We wanted to remodel the building and do some stuff there. I even had plans drawn up to do it," he said. "Keep it a nostalgic kind of place, maybe upgrade it to make it look kind of cool. Because the west side is a really different kind of community. I used to live right down here on 17th, and west side's kind of cool. Expensive, but it's cool."

The Palmeris said they spend an hour or two every day fielding calls from concerned neighbors and customers, reminding concerned parties that they can submit their thoughts to the City of Bend.

"We have customers who are working on their third-generation customer," Palmeri said. "I can think of a couple. We're working on the grandfather, the dad, and the kids. With customers, it's pretty personal, we know everybody by name who've been coming here for years."