A New Way to Beer Fest

With beer fests—and all fests—only alive in the virtual world, attending events like Portland Beer Fest just got easier for locals

Is the virtual beer festival a way of the future, or a way of right now? Who knows, but the Portland Beer Fest Virtual Edition was way more fun than I was expecting.

For $30, they ship 10 beers to your house. I really wasn't expecting much—maybe some type of virtual meeting with other festival goers, hardly able to hear what anyone is saying, people watching each other drink their beer. That's not what actually happened. 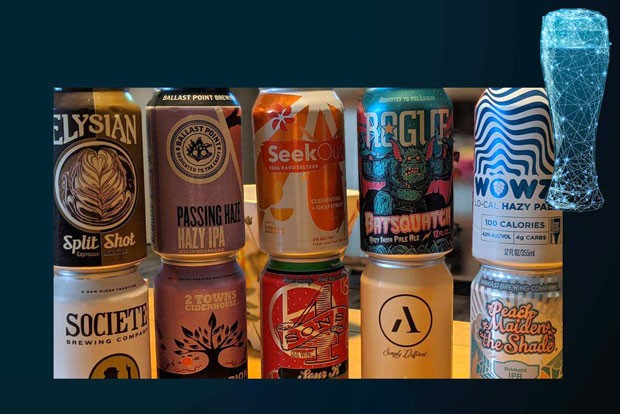 The festival was on Saturday. I received my beer shipment the Tuesday prior. I had to be home to watch the delivery driver sign for the delivery on my behalf, since you have to be 21 to receive the beer. Normally I would have signed for it, but to keep a safe social distance, he signed and then left the beer on my stoop.

Inside were 10 standard-sized cans, including: Split Shot by Elysian; Passing Haze by Ballast Point; Clementine and Grapefruit Seltzer by Seek Out; Batsquatch by Rogue; Wowza by Deschutes; Peach Maiden the Shade by Ninkasi; Abnormalweiss by Abnormal; Sour K by 4 Sons; Made Marion by 2 Towns and The Pupil by Societe.

Some of these beers were new to me, and that was exciting. The beers were good, but many of them are pretty easily acquired, so that was a bit disappointing.

My expectations were still pretty low. On Friday morning, I received an email from Rock Star Beer Festivals with a link to YouTube. My expectations dropped even lower. So we are just going to watch a video... OK....

I was in my living room dancing to the intermission music, yelling “CHEERS” at my husband, who laughed at me. It really was like a beer fest in my house! tweet this

Festival day arrived. I got out tasting glasses (my husband was sharing my beer loot during the festival), a "dump" bucket and a pitcher of water for cleaning said tasting glasses. Just before the festival was scheduled to begin, I opened up my laptop and clicked the YouTube link that included a live chat of folks talking about the beers and generally visiting. I was intrigued. We were having a great time, and then a 2-minute countdown began. I casted to my smart TV and got ready.

The festival began with a music video—a remake of a popular song from the '90s. It was cool. I felt myself getting a bit excited. Next, Mark McGrath from Sugar Ray welcomed us to the festival. That was fun. Next up was a hilarious interview with a brewer from Abnormal brewing as he talked about his beer, and what you should be able to taste and smell. There was banter and trivia. Quite enjoyable. This continued on through a couple of more breweries, and then we had another music entertainer and a breather from smashing back those brews (thank goodness). Along the way, other stars made appearances, including people from "Tiger King" and actor Gilbert Gottfried. (We misspelled his name in the print edition; sorry about that, Gilbert!)

This went on with five of the breweries before intermission. At this point, I was very much regretting my "pregame." I was in my living room dancing to the intermission music, yelling "CHEERS" at my husband, who laughed at me. It really was like a beer fest in my house! I would periodically check in on the chatting going on with the other attendees. It seemed we were all having fun... and also on our way to a hangover the next day.

The second half of the festival is a bit of a blur, but I think it was a great time! Somehow, I managed to finish my homemade sourdough bread that the quarantine Facebook posts encouraged me to make before hitting the sack.

The next day, my hangover was palpable. Ten beers shared with my husband in about a two-hour time frame may have been a bad idea, but it was still worth it, and a breakfast burrito from Don Gabino's was the perfect medicine.