A Night in Portland, as Federal Troops Remained ▶ [with video]

A Bend journalist spends a night in Portland during Black Lives Matter demonstrations, and tear gassings

A slight whiff of pepper—or perhaps more like the scent of RoundUp, left in an enclosed shed over the summer. Next is the boom of a crowd chanting: "Enough is enough. Enough is enough...." 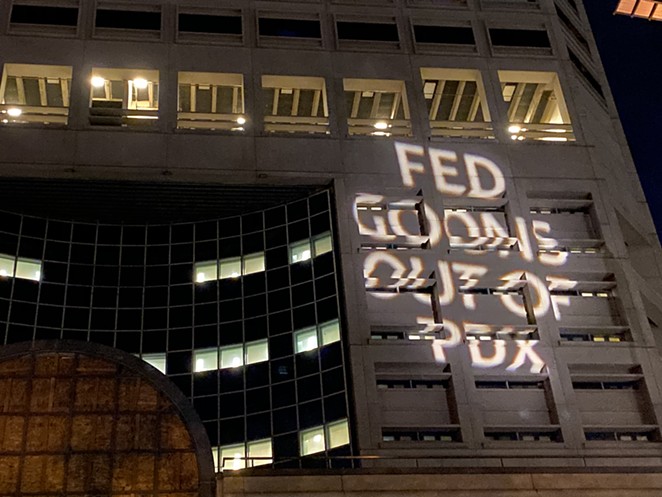 And then the loudspeakers, on this night, announcing that Portland Mayor Ted Wheeler was in attendance; the people speaking before and after him reminding the crowd that the point of all this, even as federal troops introduced more chaos into protests this past week, was to remember that Black Lives Matter—that this was about putting an end to the profiling and killing of black people at the hands of law enforcement. On Wednesday, I drove to Portland to document the evolving clashes between federal troops and protestors who have staged demonstrations in front of the Multnomah County Justice Center and the Mark O. Hatfield Federal Courthouse for nearly two months. Last week, President Trump deployed troops with the Department of Homeland Security to the city, where they've reportedly rounded up bystanders, gassed medics and even stuffed some protesters into unmarked vehicles, according to The Washington Post.

In response, a group of mothers, calling themselves the Wall of Moms, has been attending the protests, standing between troops and Black Lives Matter protesters. The Wall of Moms Facebook group had over 9,000 members when I went to the page Wednesday morning to learn more about them. By the time of this writing, it has jumped to over 13,000—six days after its creation.

As a Bendite and former Portlander who's attended and covered many downtown Portland demonstrations, I wanted to see the action, appearing more violent than any I'd witnessed in the city first-hand. Walking up to the scene, the smell of smoke and something slightly peppery, plus the roar of the helicopters circling above and the sounds of people chanting, woke up any sluggishness I might have been feeling from the long drive from Bend.

I walked into the area around the federal courthouse and the Justice Center just as Portland Mayor Ted Wheeler, to many jeers from the crowd, was talking. Wheeler, who oversees the Portland Police Bureau, has faced much criticism for allowing PPB officers to use tear gas and other violent tactics against protesters during earlier clashes.


As speeches fizzled at the Justice Center (and the guys Wheeler left with took the microphone and speakers with them) demonstrators began to move again toward the courthouse, just north of the Justice Center. Some stood against the barricade, shaking it and calling "Feds Go Home."


People lit fires behind the barricade; some jumped over.

WATCH: Using a fire extinguisher on a fire behind the Hatfield courthouse barricade.

By this time, the crowd, some of whom have spent many nights clashing with police—and now federal troops—began to warn that the tear gas was coming. Intermittently, a recorded warning, announcing that 'this is an illegal demonstration,' played from the courthouse building. Fireworks shot from the crowd toward the courthouse with loud bangs. Smoke from the fires and fireworks billowed around. 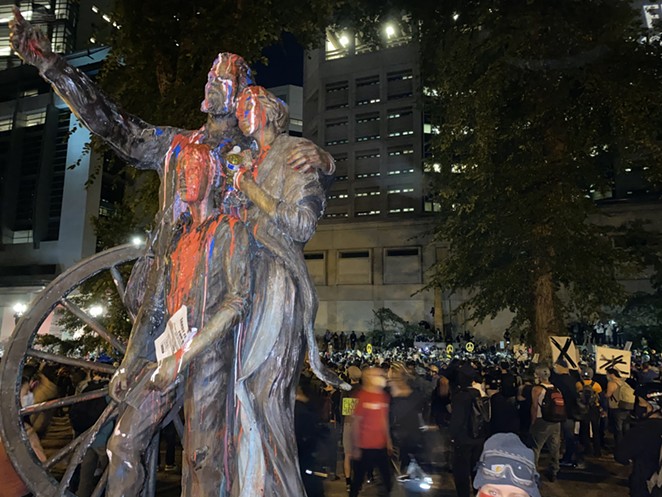 When the tear gas started, I was down the block, trying to find the location of Riot Ribs, the free barbecue stand started by Lorenzo, a former Black Panther. He set up the free food stand (donations encouraged), for demonstrators, and has been a mainstay of the Portland protests—even getting a boost Wednesday from Rep. Earl Blumenauer (D-OR3), who donated and encouraged his constituents to do the same, Willamette Week reported.

I came around the corner in time to find people coughing and crying from the gas. I walked through it for a while, grabbing a photo or two as medics handed out eye wash, but eventually succumbed to a coughing fit. I was wearing a cloth mask made by my mom. My goggle game, however, was a bit stronger; living in Bend, a quality ski helmet and pair of goggles is practically handed out as part of the Bend starter kit. My eyes barely teared up.

Mayor Wheeler was still downtown, and, wearing scienc-y goggles and a surgical mask, reportedly stood near the front of the line, against the barricade at Hatfield courthouse, when troops released the canisters.

Throughout the night, the police—and even federal troops'—presence was minimal. A statement from Portland Police July 17, indicative of its policy toward current protests, states that police will "remain clear of peaceful protests and demonstrations but will respond if people light fires, barricade doors to the Justice Center, commit acts placing community members or public employees at grave risk of injury or interfere with the ability for public employees to conduct necessary functions of jobs in the Justice Center or other acts placing people at grave risk of injury."


Meanwhile, the current clashes with federal troops could be coming to an end. By way of temporary restraining order, U.S. District Judge Michael H. Simon temporarily restrained the use of force by federal troops in Portland, OPB reported Thursday afternoon.

Earlier Thursday, a group of Oregon state senators and representatives—on the heels of similar moves by Oregon's Washington, D.C. delegation—delivered a letter to Attorney General William Barr and Chad Wolf, acting head of the Department of Homeland Security, calling for the federal troops to leave Oregon. None of Central Oregon's state legislators signed the letter.

Will it spell a slowdown of clashes and activity in downtown Portland?

As some speakers at the demonstrations pointed out, if it does, they hoped it put the focus back on Black Lives.