A Place for Injured Wildlife | The Source Weekly - Bend, Oregon

A Place for Injured Wildlife

On a weekend in July, the new wildlife rehabilitation facility, Think Wild, east of Bend, created traffic jams with its open house. The facility once housed another wildlife rehab facility that went belly-up. Think Wild is a new organization, sort of like the Phoenix rising from the ashes.

Its board of directors is made up of local people with diverse professional backgrounds and experiences. With Michelle van Hilten as executive director and Max Lipman as director of wildlife rehabilitation, the new facility takes in injured wildlife animals and prepares them to re-enter the wild. 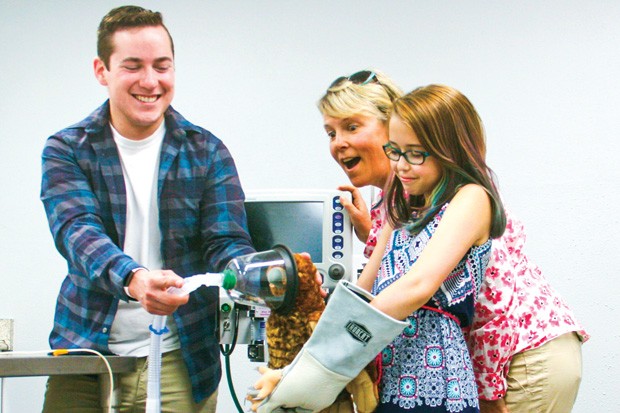 They also have 11-year-old Payton Johnston from La Pine to bring new life into the operation. In 2015, when Payton was 7 years old, she and her mom, Amanda, began transporting sick and injured wildlife from southern Deschutes County to the previous facility. She started helping out regularly, then became an indispensable member of the team.

Payton and Amanda kept hauling injured and sick animals from the La Pine countryside to the facility, and stayed to pitch in and do laundry and mix bird food two days a week. That's easy to say, but keep in mind it's a little over 24 miles from her house to the facility, one way. It wasn't uncommon for her and her mom to make that 24-mile run in the middle of the night when someone delivered a sick or injured bird to the Johnstons' home.

Then, in 2017, Payton started her Injured Wildlife Hot Line. She also began making special shoe-box sized shipping containers she used to transport her injured birds and other animals to the clinic.

Payton says, "I don't like spiders, but everything else is OK," and "everything else" includes, songbirds, porcupines, rabbits, skunks, ducks and just about any wild animal she could get into the family car to haul to the clinic.

"We will be in regular communication with ODFW and USFW, submitting monthly updates on the patients and impacts we are seeing around our community. We will be supporting the wildlife rehab community in filling gaps for wildlife care and working collaboratively with these specialists, and are providing support for the rehab community and the general public through our Wildlife Hotline which is currently operational seven days a week."

A big part of Think Wild's mission is education outreach for students as well as being a liaison to the community on conservation issues facing wildlife. They plan to be available for K-12 schools and educational facilities throughout Central Oregon in the future.

To help keep the wheels of wildlife rehab humming smoothly, Think Wild encourages community support to help build a series of outdoor enclosures designed to rehabilitate and condition patients for successful release back into the wild. Anyone can support an enclosure through various levels of sponsorship.

The wildlife hospital, located at the northeast corner of Neff and Erickson roads east of Bend, is not open to the public. The staff asks that anyone needing to bring in an injured animal call the wildlife hotline first: 541-241-8680, 8am to 8pm.

-Editor's note: Before it appeared in the CO Pets magazine, a version of this story first appeared in Jim Anderson's "Natural World" column, found in the Source Weekly nearly every week.