A Plant-Forward Evening, and a Night at a Rooftop Bar | Chow | Bend | The Source Weekly - Bend, Oregon

A Plant-Forward Evening, and a Night at a Rooftop Bar

Enjoying an evening at Terra, among the latest additions to downtown Redmond

Like all of Central Oregon, Redmond is growing fast. These days, its once-sleepy downtown corridor is alive with a host of awesome food and drink spots, including breweries, taco trucks and... more breweries. It's a bit hard to believe that it was less than 10 years ago, in 2013, that Wild Ride Brewing—now the locals' go-to beer hangout and food truck pod—was the talk of the Redmond restaurant scene, taking over the former Parr Lumber building downtown. More recent (and welcome) additions have included Westside Taco Co., now a popular spot for crave-worthy carnitas and more, and chef Amber Amos' newest baby, Westside Local, a locally sourced restaurant with a menu that focuses on what's fresh and in season. A couple blocks away relative newbie Carnaval Mexican Cuisine has also been delighting visitors. 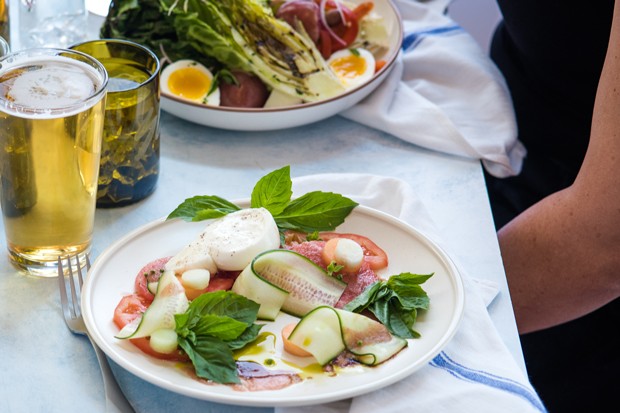 Among the latest kids on the block this year is Terra Kitchen, the new restaurant inside the SCP Redmond hotel. Located in the former Red Martini—which closed its doors during the pandemic—Terra is a flash of the bright and new in downtown Redmond. The red décor and the dark curtains are gone; now, the space is bright and modern. Designers aimed for a "sustainable, minimalist concept," with "terracotta lighting, elements of native flora, and a color palette of earth tones. Use of natural salvaged hardwoods throughout is another nod to sustainability in the space," describes a press release from SCP Redmond.

Terra Kitchen boasts a "plant-forward" menu that draws largely on local ingredients from local farms and focuses on "coastal Mediterranean" cuisine. Local farms including Sungrounded Farms in Terrebonne, Rooper Ranch and Deschutes Gourmet Mushrooms in Redmond, along with Five Kingdoms Farm in Bend are among the establishments contributing to the menu.

Whenever possible, Chef Sean Hulecki—formerly of Pronghorn Resort—taps the hotel's rooftop garden to add items to the dishes. While "plant forward" might indicate that the place is vegetarian-only, guests can add fish or meats to dishes as they desire. So it went on my visit to the restaurant soon after its opening this summer. 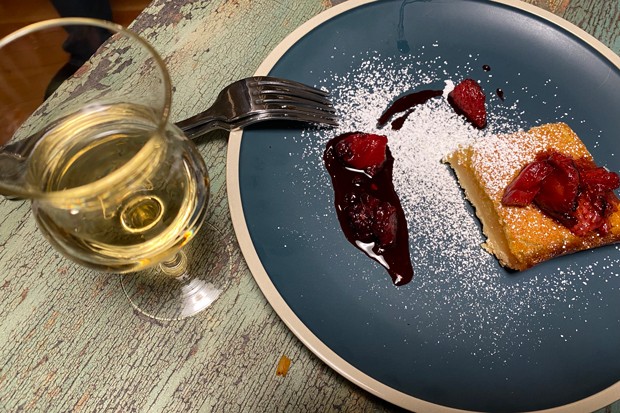 Our first course included bread service and the Summer Roots salad, a delightful combo of root veggies including golden beets, goat cheese, herbs, and, surprisingly, avocado. While my dining partner and I remarked upon the avocado seeming a bit out of place, Hulecki said his aim was to combine a number of textures into one dish. Next up was the Paella Valenciana—a dish not often enjoyed by vegetarians in restaurants, due to the usual addition of seafood. Terra's version included charred cauliflower, snow peas, leeks and other veggies. We opted to add grilled salmon to our paella, which was on the list of nightly protein specials. Lots of grilled bread and fresh sprouts made this a yummy, while unusual, form of this popular Spanish dish. Topping off our dinner was a heavenly lemon dessert, which appears to be seasonal as it is not currently on the restaurant's menu. That's some of the fun of going to a seasonal restaurant; a dinner eaten during the bounty of summer will undoubtedly be different than one enjoyed later in the year.

Before our visit was over, we were able to enjoy one last benefit of eating in a restaurant inside a hotel like SCP Redmond: the bar and view from above. SCP Redmond's rooftop bar garnered a lot of attention when it opened in late 2019 and for good reason. With cozy nooks for lounging and a great view of the mountains and downtown, it's an ideal place to sit back and enjoy a nightcap. The inventive drinks—including one featuring the unlikely pairing of charcoal and lemon—were the ideal additions to a night "on top of the world."