A Push for a Warming Shelter in Bend | The Source Weekly - Bend, Oregon

A Push for a Warming Shelter in Bend

Local leaders work on solutions for the unhoused population, still left out in the cold

November 04, 2019
5 comments
Temperatures dropped below freezing the night of October 29—while people without homes braved the life-threatening temperatures out of doors, huddling in their vehicles or cuddling with their animals for warmth, many hidden from sight on Bureau of Land Management and U.S. Forest Service land on the outskirts of town. 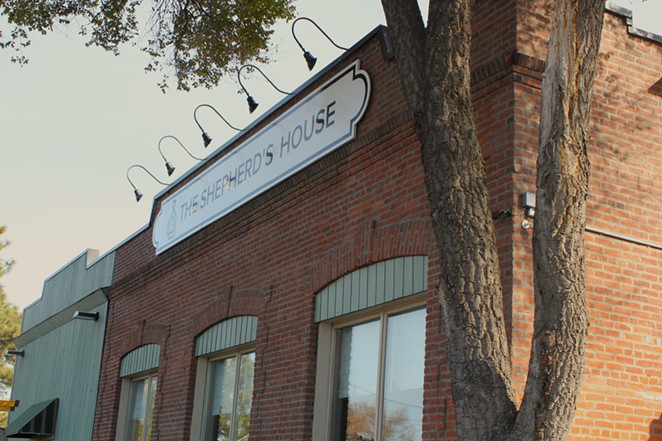 Since 2008, the declaration has allowed organizations to operate makeshift homeless shelters when temperatures drop below 25 degrees and all other shelters are full—expanding emergency possibilities to include churches, gyms, and even warehouses that pass a fire inspection, according to Larry Medina, Bend deputy fire chief. First Presbyterian Church is the first organization this year to begin the permitting process.

The Homeless Leadership Coalition estimated that the community will need to find space for at least 100 people as soon as possible because the two long-term shelters, Shepherd’s House Ministries and Bethlehem Inn, are already at capacity.

The last-minute scramble to find a space is partially due to the fact that Sagewood Sanctuary—which operated in emergency status for the last two winters—will not be open as a warming shelter this year. The temporary space was set up inside Pfeifer & Associates downtown offices on Greenwood Ave., which functioned as drug and alcohol treatment facility by day.

Sally Pfeifer, who owns and operates the outpatient rehab (in addition to a housing assistance program for 130 people), was also the director of Sagewood Sanctuary. The for-profit treatment center and the non-profit shelter were two separate entities living under one roof. She said that while they were technically allowed to have 20 guests per night last winter, upwards of 50 would often show up at the door. The operation was unmanageable, difficult to staff, lacked funding and ultimately put her business at risk when complaints were filed by neighboring businesses and residents, she said.

Bend City Councilor Barb Campbell advocated for Pfeifer last year when she came to a meeting asking for funds to keep the shelter open for a few more months.

Sagewood Sanctuary functioned as a low-barrier shelter, meaning it welcomed people suffering from active addiction, untreated mental and medical health issues and even people with pets. There are other area shelters providing stable living quarters for hundreds of people in Bend, but they follow high-barrier protocols. Bethlehem Inn for example, houses 150 guests per night who are breathalyzed and drug tested as a contingency of staying in the facility, while also providing a few low-barrier beds in emergency situations, according to Bethlehem Inn Executive Director Gwen Wysling.

“Housing stabilization” is a key phrase in the homeless advocacy community. The goal for many shelters is to act as a transition point between living on the streets and getting into a more permanent situation. Addressing the underlying issues that lead to homelessness is part of the mission, and allowing people who are under the influence to mix with others in the early stages of sobriety may lead to major setbacks. Last winter, Shepherd’s House Ministries accepted upwards of an additional 40 low-barrier male guests on a nightly basis (with some stricter house rules than Sagewood), but will no longer be providing that level of service for this reason, according to John Lodise, director of emergency services.

At the Tuesday meeting, Lodise answered questions about the low-barrier, winter-warming-shelter model the organization has helped to establish in Redmond, Madras and Sisters. In Redmond, the shelter runs as a temporary, overnight shelter in a host church, with a staff that can set up each night and break down the following morning,. Three host churches serve one at a time, consecutively through the season. Once guests have checked in, they're required to stay for the evening, cooperate with staff, and there are no drugs and alcohol allowed on site.

Even a temporary shelter in a donated space may require 10s of thousands of dollars to run for a season, but there are—at least for now—funds available to set something up, and more money may be on the way. Just this year, the Oregon Housing and Community Services department received historic funding levels. $150,000 of this new money has been fast tracked to each "Continuum of Care" territory throughout the state, and in Central Oregon, that's HLC. “Continuum of Care” means an organization advocates for people all along the spectrum of housing stabilization, from the chronically homeless to those who might just not be able to make rent next month.

HLC—in partnership with NeighborImpact—is now tasked with distributing this new state money to other area shelters, or to use it specifically to open and run a new temporary space.

“I believe it is time for the faith community to step up. People say they provide funding for many things and this is true. However, in LaPine, Redmond, Sisters and Prineville, they also provide warm space.” - Sally Pfeifer tweet this
“We are ideally looking for a large, preferably open space, similar to a gym, an empty retail space or a warehouse with restrooms and a small kitchen,” said James Cook, co-chair of HLC. “By using [the] Shepherd’s House model, we are hoping to communicate to property owners that there will be many safeguards in place to mitigate risks. We’ll have insurance, security, paid staff: a full network of experienced providers… police, fire, medical. It would be great if the space was donated, but we can use funds if we have to. We don’t want to make it a burden if someone wants to help.”

Bend City Councilor Justin Livingston, who was also at Tuesday’s meeting, committed to using his real estate skills and connections in the community to look for possibilities on the MLS as well as contacting church properties. Livingston told attendees that funds may be available for next year at the city level through the Community Development Block Grants, but these are competitive and require long-range planning. Currently Howard Friedman, board chair of Bethlehem Inn, is in contact with the owners of a 6,000-square-foot space that may be available to rent only for November and December,  located on Third Street near Auto Kings.

Campbell explained that in years past, the community relied on various churches around town to open their doors to the homeless in winter months.

“I like the churches idea—number one, they don’t pay any taxes,” Campbell said. “That’s the bargain that was made because it assumed that they were picking up some of these social welfare programs.” Churches are considered public charities, also known as 501(c)(3) organizations, and are generally exempt from federal, state, and local income and property taxes.

“I believe it is time for the faith community to step up,” Pfeifer added. “People say they provide funding for many things and this is true. However, in LaPine, Redmond, Sisters and Prineville, they also provide warm space.”

Meanwhile, leaders of local homeless advocacy organizations are stretched to their maximum, both in terms of capacity, and the time they have available to work on solutions. HLC, for example, is an all-volunteer board run by members who also have full-time jobs in human services, according to Cook.

In a time of crisis, Campbell believes it’s time to get creative. During Tuesday’s meeting she floated the idea of using schools: they have large gyms, kitchens and have already passed rigorous fire inspections. Animal shelters may also work, she said, as they are regularly sanitized, have cement floors and the animals would probably appreciate the company, she said.

For now, many of Bend’s underserved residents remain out on the streets or in the woods.

“This is a national issue. We’re the richest country in the world,” Campbell said. “We care more about our pets than we do our homeless people.”

Fire Chief Medina agreed that homelessness is a national crisis.

"Locally, there are some very capable and caring people coordinating the work necessary to find out the root cause creating homelessness, creating policy to address the issue, and collaborating their resources to do the most good, " he said. "We would like to ask the community to become aware of the problem and how they can help."