A Push to Rename the Bend VA Clinic After Bob Maxwell

June 25, 2020
comment
Representative Greg Walden (R-OR2) introduced legislation Thursday to name the Bend Veterans Affairs Clinic after WWII veteran and Bend resident Bob Maxwell. Prior to passing away in May 2019, Maxwell was the oldest medal of honor recipient in the nation—Maxwell’s medal being signed off by Franklin Delano Roosevelt two day before FDR’s death. Maxwell was 99 when he passed away.

Maxwell earned the Medal of Honor during the 1944 campaign to recapture France, when an enemy grenade was thrown into his command post and landed at Maxwell's feet. Maxwell jumped on top of the explosive in order to smother the blast. 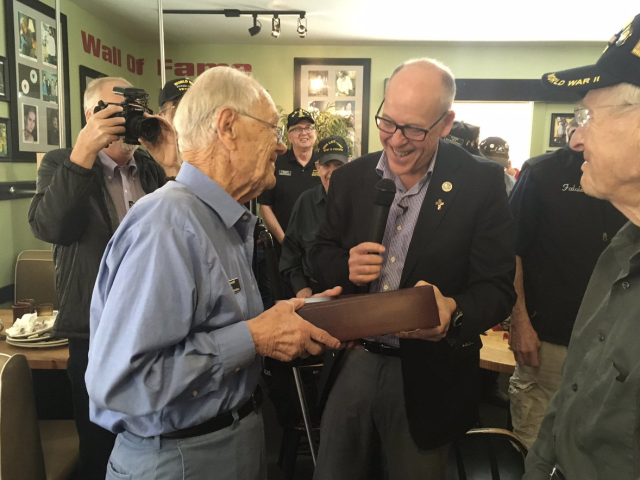 In a 2015 interview with Source Weekly Reporter Corinne Boyer, Maxwell described the honor: “It's not typical of my character to be on such a high pedestal and have everybody looking up to you; I'd rather be down among the people," Maxwell said. "The medal does make you feel somewhat like that, but then when you get to thinking about it...you got rewarded for something that some people think was worthy, so [then] you go back to work.”

Walden’s legislation to name Bend Veterans Affairs Clinic after Maxwell was further cosponsored by representatives, Suzanne Bonamici (D-OR-1), Earl Blumenauer (D-OR-3), Peter DeFazio (D-OR-4), and Kurt Schrader (D-OR-5). Senator Jeff Merkley (D-OR) introduced similar legislation in the Senate, which Ron Wyden (D-OR) cosponsored as well. In addition to the legislation, Walden and the rest of the Oregon Delegation sent a letter urging the leaders of the House and Senate VA Committees to consider their legislation to rename the Bend VA Clinic.

In the final lines of Walden’s Thursday press release, he thanks Bob Maxwell for his friendship and service to the United States; concluding with, "It is my hope that this bipartisan legislation will swiftly move to President Trump’s desk and become law — forever ensuring Bob’s legacy is honored and his heroism is remembered.”

Want to read more about Maxwell? Check out this past Source article, “Honor and Humility.”