A Quick Strip at Stars

Stormy Daniels gave a decidedly brief performance in Bend last week; but one local reporter was there to catch the action Stormy's Sassy Six 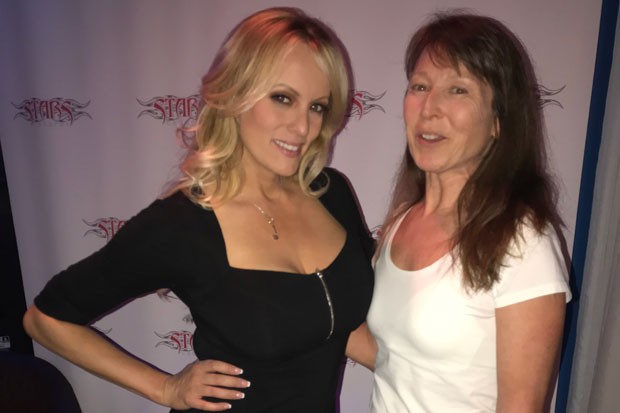 We've removed the name of one of the dancers at the dancer's request due to a safety concern.

At 6 foot, 4 inches tall and 320 pounds, Chef Christopher Plascencia could easily double as a bouncer. He met me at the front door at about 5 pm, when my eyes had trouble adjusting to the bar's cave-like darkness. I followed him past a few women wearing stilettos and little else, who were chatting with a handful of men. In the kitchen, I was watching Plascencia prep ahi tuna, filet mignon and tacos when I heard a familiar, booming voice, with a New York accent.

The door to the kitchen swung open. In bounded a freelance writer with whom I'd worked. This time, though, Andes Hruby was wearing a silver sequined bikini bottom, a bustier and red-framed reader glasses, her blond hair up in a ponytail. I didn't know the 49-year-old former fitness instructor with a Master of Fine Art degree in literature had been bartending there. She told me she usually worked the lunchtime shift.

"It's the only place in the world that lets you cook in your underwear!" said Hruby, whose essay about being photographed by Robert Maplethorpe appeared in the Los Angeles Times in 2016. She had been called in to work for the busiest night at the joint since it opened in 1999.

Randy Kaiser, co-owner of the three Stars clubs in Oregon, said he booked Daniels, 39, whose real name is Stephanie Clifford, at a bargain rate. He'd called his agent immediately after the news broke in January that Daniels was paid $130,000 to keep quiet about her alleged relationship with #45. Kaiser said he paid about four times what he'd spent to hire her for a show at Stars a decade ago. Since then, her fee has jumped to 10 times what it was in 2008.

"This is a chance to meet somebody in history," said Kaiser, a self-described newshound who studied at Georgetown University and ran his family's window manufacturing business in Colorado before co-founding Stars. "Some people say it played a role in the Clinton administration, that cruise missiles were dropped to deflect from Monica Lewinsky. Who's to say that's not what's happening with North Korea, who knows?"


"All the couples who saw this in the media will come back, because they found all of us." —Ginger Thomas tweet this

Ironically, missing clothing was holding up Daniels' striptease. She had flown in to Redmond, but her luggage was lost. She wouldn't perform until she was reunited with her costumes, so the 9 pm show was canceled. Instead, she'd take photos with patrons and do an 11 pm show.

Cindy Swanson, 63, of Bend, came to Stars for the first time with her husband and several friends. She wants to be able to say she's seen Daniels "when she takes (Trump) down. I think she's sticking up for herself," Swanson said.

Seeing Daniels on stage was rather short-lived, however.

At about 1 am, Daniels took the stage in a sparkling white bustier with a shimmering blue star in the center of each cup, and a red, open-front, floor-length skirt and blue G-string. All of that clothing was off a few minutes into the second song—Poison's "Every Rose Has Its Thorn"—when a man standing near the stage shouted something and purportedly threw a wallet at her. Daniels yelled back, pivoted and stomped off stage.

Lynette Ripley, 50, said the abrupt ending didn't change how she felt about the performance. "I still support her," she said.

On the club's outdoor patio, several dancers smoked and drank, saying they needed to decompress after performing for a packed house of about 140 guests.

Olivia Haro, 39, who performs as "Lyvvy," said she's been dancing at Stars since the first year it opened. "I feel as though women in our society, we're having a hard time really having our voices heard," said Haro, who has three children and earned a bachelor's in fine arts from OSU-Cascades in 2015.

Ginger Thomas, 39, whose dancer name is "Danni," said she has been stripping for 18 years, and moved to Bend a year ago from California. "I love Stars and Bend," she said. "The people are nice. I'm treated like a little princess and they have an amazing chef."

Earlier, when Stormy had been taking photos with guests, several of Stars' dancers, including Thomas, posed with her, too. Daniels pulled down her black blouse so she and Thomas could press their breasts together. Thomas believes Daniels' appearance helped introduce the club to a wider audience. "All the couples who saw this in the media will come back, because they found all of us," Thomas said.

Stormy Daniels wasn't doing interviews in Oregon, according to Stars Cabaret, but when it was my turn to have a photo taken with her (her bodyguards shut down the line after me) I was ready. New York-based journalist Stephanie Chang helped brainstorm these non-presidential queries designed to get answers. They did.

Source Weekly: If you were First Lady, what would be your cause?

SW: Have any famous actors ever tried to pick you up?

SW: Who was your greatest lover?

SD: Lots of different ones, for different reasons. But — I've had some really bad ones, too.

SW: What's the most valuable item in your purse right now?

SW: Who's your favorite Beatle?

SW: Who's your favorite group?

SD: I can't think of one right now, but I love music and going to concerts.

SW: What was your favorite concert?

SD: Lynyrd Skynyrd — I went to see them last weekend.