A Reason to Love Oregon: The Sunstone

Gem of the Oregon Outback, and the official Oregon state gem

The Oregon Sunstone has an appropriate name, reflecting, as well as absorbing, the light from the sun in all its hues and beauty. For just that reason, it's the official state gem of Oregon. But you can't just go out in your back 40 and pick one up—unless you live in the eastern part of Lake County, near the town of Plush.

But right in downtown Bend is The Sunstone Store. Elyse and Steve Douglas run the outfit, and with their sons, mine sunstones out in the sagebrush and bunchgrass wilds. If Elyse is not too busy creating sunstone jewelry she, or any one of the Douglases, will share the story of how sunstones came to be and how these beautiful gems fit into Oregon geology.

Oregon has gemstones coming out of her lava-laden bones, but it's taken a long time for those treasures to appear here. The father of Oregon geological studies, Thomas Condon, published a remarkable book in 1902, "The Two Islands and What Became of Them," which provides the complicated history of our beautiful state.

Condon describes the history of Oregon in such a way you can't help but thank him for sharing his fascinating love of the Earth and admire his down-home intelligence. In the early 1900s he started and taught in the Department of Geology at the University of Oregon back when no one dreamed there would be gemstones lying on the surface in southeast Oregon. 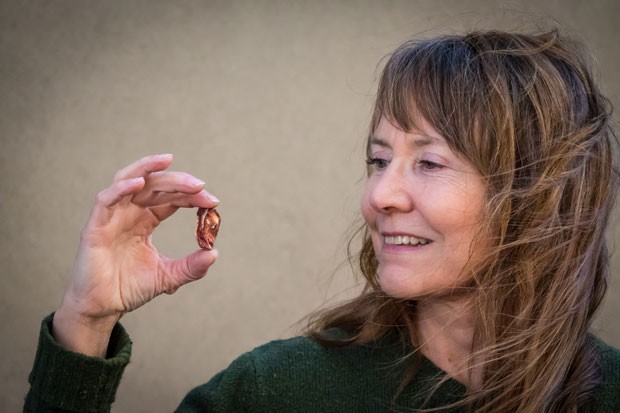 In his book, Condon begins with a story that sets the stage for understanding Oregon's geological history. His introduction starts with: "The want which these pages attempt to supply is a popular rather than a scientific one.

"For years our General Government has been publishing through railroad surveys and the annual reports of the United States Geological Surveys a large mass and wide range of geological information on the structure and history of our Western coast.

"But this large body of information is so scattered that few have the time to collect enough of it to form a continuous unity of its history. Besides, there are many things in the geology of Oregon of lively interest to the young and uninstructed, and running through them are all the threads of a continuous unity that seems capable of a possible narrative form such as might increase the interest of the young.

"An attempt to meet this double want, not with a fresh contribution to science, but with an attempt at picture-making for the uninstructed, has led to the writing of this story of 'The Two Islands.'

Condon then went on to Chapter 1, "The Stone Quarry," with a short paragraph in which he introduces Oregon's geological history: "The ancient traveler and historian, Herodotus, long ago put on record the statement that he heard from Egyptian priests that in a range of hills along the eastern border of the country the rocks contained buried sea shells. The priests contended that these shells were in such positions and numbers as to indicate that in come countries the sea and the land had changed places."

And so it is in Oregon. Near Kimberly are quarries containing the fossilized remains of marine ammonites and fossil pieces of the ancient marine ichthyosaurs. In the foothills of the Cascades east of Salem there are bands of mud containing extinct clams.

The "two islands" Condon mentions are the Blue Mountains in northeast Oregon, and the Siskiyou Mountains, a coastal sub-range of the Klamath Mountains, located in northwestern California and southwestern Oregon. The Pacific Ocean filled the space in between, which explains the marine deposits in seemingly odd places.

It was in the period of Oregon's Cascade Uplift—forming the more recent landforms we see around us today—that the Oregon Sunstone began to come into existence. As the lava flows cooled, feldspar crystals formed in cavities and, eventually, when the waters receded and the encompassing rock became subject to weathering, the feldspar concentrations, or sunstones, were exposed.

Driving to Lakeview from Bend takes you past remarkable volcanic features; Lava Butte and flow-after-flow of basalt, then the volcanoes that left behind magnificent lava caves — tubes actually — spawned by the largest volcano in Oregon, Newberry Caldera, with its gorgeous lakes and obsidian flows. You'll also find yourself traveling past the showpiece of that area, Fort Rock.

Going east from Lakeview brings into view the snow-covered rims of Hart Mountain, part of which is a Pronghorn Antelope Refuge. This is Sunstone country, the part of southeastern Oregon that boasts unpopulated vistas, wide open spaces and geological wonders such as thunder eggs.

Feldspar is abundant in this landscape, and when the rock containing it cools, it begins to absorb the elements around it. If one of those elements is copper, a process known as shilling will usually take place, leaving streaks of the copper embedded in the sunstone, giving it an allure that gemstone people can't resist.

Jewelry made with sunstone containing the process of shiller is beautiful and expensive because of its rarity. Oregon Sunstone is the only variety known that possesses shiller, which makes jewelry made from it highly sought after. Sunstones range in color from a pale champagne to a deep red with greens and amber in between, all determined by the amount of copper in the mix. No two are exactly alike.

If you want to try to find some of these state gems yourself, there are public sunstone collecting areas in the Plush countryside. You can call the Bureau of Land Management office in Lakeview for traveling directions and more information. There are private mine sites all around the BLM site, and trespassing on private mining sites or quarries can lead to a lot of trouble. Another element of sunstone collecting is the remoteness of the area, with limited cell phone coverage.

The town of Plush has some help and fuel for your rig and a store to buy food and drinks with outside tables, water, and toilets at Egan Park—but it would be wise for you to have enough supplies and water for the time you expect to be collecting.

In the meantime, the Sunstone Store in Bend offers us a chance to marvel at these small sparkling wonders unique to our Oregon Outback.