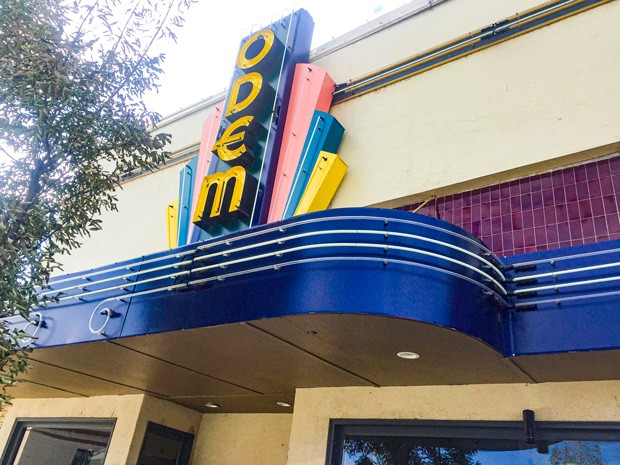 Odem Theater Pub is creeping up on its one-year anniversary and owner Ted Eady isn't planning on resting on his laurels. When I went to the theater pub, Eady was sitting in the lobby with his laptop, already planning the next few months of movies he's booking at the theater.

"I've had the building for a number of years," says Eady. "I also have a motel down on the coast in Gold Beach. I was at a standup paddle event in conjunction with a wind surfing event. So I'd go down to Santa Cruz to the paddle fest in March and get some of the stand-up guys to come up to my event and they have a reception at a place called Pono Hawaiian Grill. It's a brick building with music in one corner, and they were showing surf films on the wall and that was the beginning of me thinking, 'oh, I should do something with that old Odem Theater building.'"

His inspiration is obvious in every nook and cranny of the space. Opened in 1937 by Milton and Fossie Odem, remodeled in 1947 and decommissioned as a theater in the 1970s, it's easy to feel the history of the building seeping from its pores. But certain buildings know what they need to be; they know what they're supposed to be. Fundamentally, Odem Theater Pub was destined to be a theater once again.

Eady brilliantly has taken everything that works or doesn't work from theaters across the country and has managed to craft a space that manages to feel like a boutique art house theater, but without any of the drawbacks of being a smaller venue. The auditoriums are cozy without being claustrophobic, the screens are perfectly sized for the space and the state-of-the-art digital cinema projectors and sound equipment mean you're not sacrificing the quality of the film to support small business.

With a full menu (with pizza crafted from an old family recipe) and 20 beers on tap, Odem Theater Pub reminds consumers that chain theaters adding overpriced beer to their inventory is just putting lipstick on a pig. Eady's choices (like having easily affixable trays for the auditoriums) are expertly curated ideas that enhance the theatrical experience, instead of feeling like theater chains' cynical cash grabs designed to turn consumers' pockets inside out.

Odem Theater Pub is a gem in the heart of Redmond. The care and attention to detail should be the norm in cinemas across the country and not specialty cases like Sisters Movie House and Tin Pan Theater. Whether you're a Redmond local or a Bendite, Odem Theater Pub is most definitely a new Central Oregon destination that'll be around for years to come.