It's been so long since I've seen a double feature in the theater that I just had to go for it. I couldn't believe how much I missed running from one auditorium to the next with only a few minutes to spare for the bathroom and a refill of root beer. I hungered for filling my brains with two movies, back to back, so that they ran together into a hodgepodge of ideas, images and sound. So, I did it. I went to the Old Mill and shoved two movies into my face and loved every second of it.

I started with "Old," the new thriller by M. Night Shyamalan, which I've been excited to see for months. The basic premise is that a couple of families staying at an exclusive resort go down to a private beach, only to start rapidly aging from the moment they get there. Whenever they try to leave, they black out and wake back up on the beach a few minutes later. 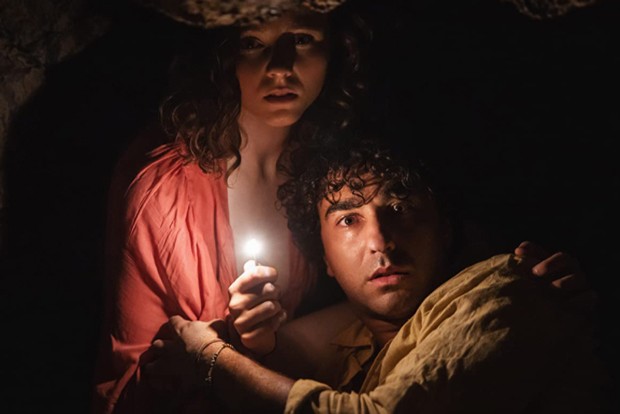 Shyamalan gets a lot of crap for always serving up big third-act twists and "Old" tries the same thing, but the real joy of the film comes from how dark the film actually gets. The movie feels like Shyamalan has freed himself from the constraints of having anything to prove, since "Split" kind of made him relevant again and "Glass" proved he could still tell an unpredictable tale. With "Old," he not only presents an entire movie as a metaphor for aging, but also populates it with interesting characters, excellent performances (especially from Alex Wolff and Thomasin McKenzie) and a one-take sequence that ranks among the most disturbing set-pieces I've seen in a horror film since "Hereditary." If only Shyamalan would improve his dialogue and plotting, he could make something truly remarkable again. The ending of this drove me crazy (in a bad way), but up until then, I thought this was his best film in over a decade.

After "Old" was over, I ran to another auditorium (eh, it was probably more of a brisk walk) and caught "Snake Eyes," the new re-boot of the "G.I. Joe" franchise. Yes, there really hasn't been a good live-action "G.I. Joe" movie ever, but I'm a sucker for a ninja movie...especially a big-budget one. Amazingly enough, "Snake Eyes" was pretty solid.

It's the origin story of the mute ninja nerds like me have grown to know and love over the last 40 years, but with Henry Golding as the titular ninja, we're given characterization for him that we've never had before.

While the movie does end up getting goofy for the last 30 minutes, the film leading up to it is a surprisingly serious and well-plotted martial arts extravaganza focused on legacy and honor. Set almost entirely in Japan, the film feels like a throwback to classic Shaw Brothers films like "Five Element Ninjas" and "The Magic Blade."

If director Robert Schwentke had taken notes while watching "Nobody," "John Wick" and "The Raid," he could have made something really memorable here. Instead, there's a lot of shaky cam action that doesn't create much excitement for anyone. It's a sign that it's a solid movie that even though the action sucked, I still cared enough about the story and characters that I remained engaged, but it was still a missed opportunity.

I saw both of these movies on opening night and the theater was pretty dead. I'm not sure if people are still hesitant to go to the movies or if it was just these movies in particular that no one really cared about. I hope people start coming back though, because there's something special about catching a double feature on a Friday night, much more special than just binging four episodes of a show from home. Maybe when "Jungle Cruise" opens in a few days, The Rock will save theaters like he so often does the world. I have faith.