A Riot of Robins

Why yes, there is a massive migration of robins—aka Turdus migratorius—going on right now

A rash, a hood, a riot—all collective nouns for a group of robins. And boy, are there ever groups, big groups, of them around central Oregon this fall! Have you seen them, too, as you drive through areas thick with juniper trees? If you, like me, have seen clouds of these beautiful birds dive bombing around your car, drinking from any available water source and generally acting zany, it's not just you. It started with Powell Butte neighbors and I noticing a lot of them on our patios, sitting on roof gutters and generally pooping everywhere. Simply driving certain roads has me ducking in my car hoping it doesn't hit anyone in these massive groups of feathered friends. I've lived in Central Oregon only three years, but those who have resided her longer say something is distinctly different this year. Is it a proliferation of their favorite fall forage, juniper berries? Is it the drought? They are hanging out near our homes and small ponds (one reason is they drink water to dilute the loopy effect of the juniper berries). It was an unusually long and warm fall. In January 2021, the American Southwest and central Texas experienced a similar onslaught of robins due to drought. It's not unheard of in Central Oregon, but it seems something more is going on. To learn more, I reached out to local and national experts about this phenomenon to see what they had to say.

According to Connie Kintner, Bird Academy assistant at Cornell Lab of Ornithology, "In fall and winter... they eat a lot of fruit ... from more than 50 genera of plants." Hawthornes are Western staples of the birds, but so are juniper berries in our region. This makes them "efficient dispersers of this species" through all the poop we're finding on rooftops, decks, and driveways in the area. Migrate already, right? It seems, according to research, that the American robin (Turdus migratorius) actually winter-over quite well all over the United States and Mexico. 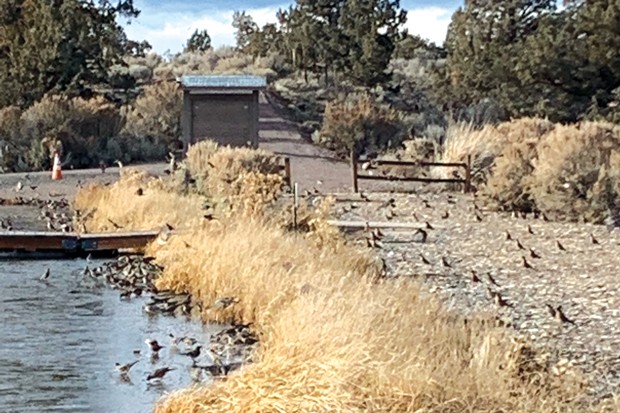 Breeding territory is to the north of us, Canada. But they stay and play in many parts of the U.S. all year round. A typical sighting might be a robin or two tugging earthworms up from the ground in the spring. Sometimes they will venture south to Mexico and Florida for the winter but not necessarily. In the fall and winter their diet consists mainly of fruit such as honeysuckle berries, or our own juniper berries (the source of gin flavoring). Roosts of robins have been known to consist of up to a quarter million birds during the winter!

Please don't disparage them too much, annoying perhaps, but they are doing their job for the environment, spreading seeds in a region suffering the effects of extreme drought, leaving the birds few options for the combo water and berries they need to survive. With area reservoirs at historic lows, it is no surprise the riots, hoods, squabbles and blushes of robins are visiting golf courses, parks and backyard ponds and water features. For many there are tragic consequences of flocking and flying while intoxicated. Window hits, almost daily and of course, automobiles, which present threats to all songbirds, raptors and wildlife. 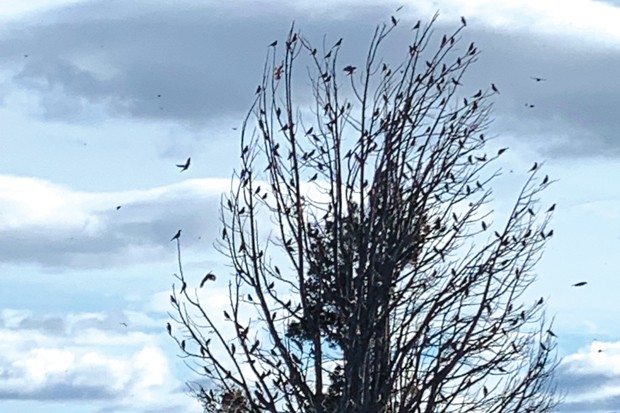 According to Think Wild in Bend there are a number of things we can do to make things safer for all birds: Keep cats indoors, make your windows visible (using special stickers, hang vertical spinners keep plants away from your house) and hold off pruning in spring and summer. Right now, these birds might be flying under the influence and we can help them stay safe. Place water out for birds, and other wildlife, but not too near windows and doors. We are in a time of extreme drought and all animals will appreciate the water, but it is particularly important for robins to dilute the effects of the berries.