A pair of night vision goggles inspired a mission to watch the happenings of a local barn owl... ending with a trip to the hospital

Recently, Mary Webster, a longtime pal and resident of Central Oregon—and whale of a fine photographer—sent me images of Sauvie Island, located on the Columbia River, north of Portland. It has a beautiful wildlife management area on it, operated by the Oregon Department of Fish and Wildlife, nestled in amongst several hundred acres of private farmland.

Webster's wonderful e-mail triggered a lot of memories of my times coming and going on Sauvie Island back when I was the naturalist for The Oregon Museum of Science and Industry in the '60s. 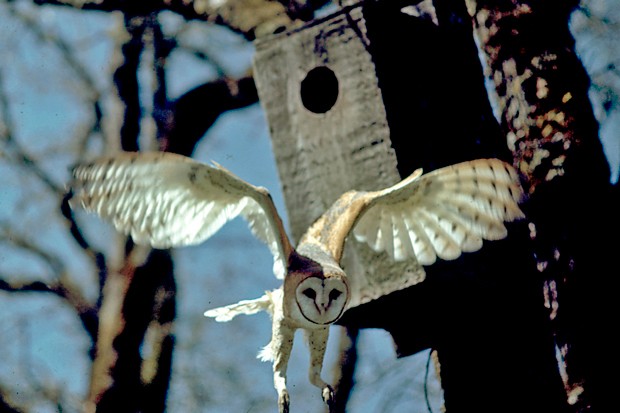 I interacted with the old Oregon Game Commission employees in those days, helping to get lead banned in waterfowl hunting ammunition. My favorite helper was Del Sanford, manager of the preserve, who was one of the more important people to get the lead ammunition ban through. Bottom-feeding ducks, such as mallards, scooped up lead shot with the vegetation they harvested, the lead killing and crippling more ducks than hunters did.

As I interacted with Sanford and his staff about wildlife living and resting in and on the management area, I was informed of a barn owl nesting in a box put up for wood ducks. This gave me the idea of answering a lot of questions I had about how barn owls (which are strictly nocturnal hunters), such as, how do they go about capturing rodents they feed to their nestlings?

Driving home from the management area, the idea of following the owl when she was on a hunting trip hatched in my head, along with the idea of how to see her doing so in the dark of night: night vision goggles!

Night vision goggles allow one to view objects in the dark, but offer no magnification. However, they are strapped to your head, so you don't have to hold them to your eyes in order to see through them, and that frees your hands for other chores.

After wearing the goggles for three nights and noticing how effective they were for night vision, I had my pal, Ed Park, take me to that barn owl nest box and leave me, so I could follow the adult all night to watch her hunt. I then asked him to come back and get me at 2 am.

My night vision was so good that when the female barn owl came out to go hunting I followed her easily. I wore heavy socks so as not to make too much noise and started out giving her a lot of room.

She stopped at the first field and I hunkered down behind an old wild rose bush to watch as she quartered the field dropping several times to grab up a rodent. I could hear the squeak as she killed the small mice, and followed her back to the nest box.

The babies were somehow aware of her returning and began to make raspy, squeaking noises as she was approaching the box. Then I could hear them gobbling down the prey mom burped back up for them.

On the next trip, she came back to see what/who was following her, but then I think she shrugged her shoulders and went back to hunting, muttering about humans. At about midnight she came out of the box and took off in another direction, I thought heading to a distant field. 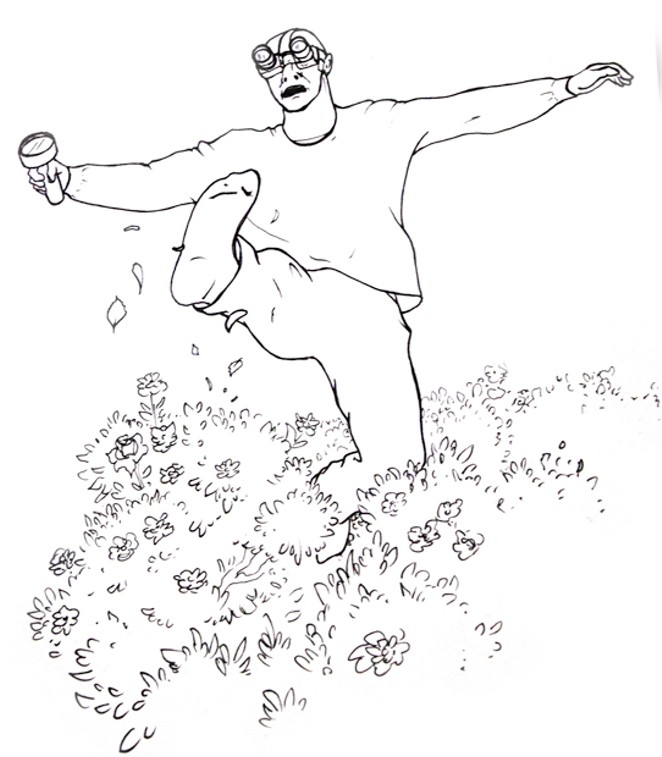 I had trouble keeping up with her as the route she took was littered with more wild rose bushes I had to leap over. (In those days I was a misplaced logger and in good physical shape, so I started running and leaping over the bushes.)

About the third one I sailed over was my undoing. I caught the toe of my stocking-covered foot on an old branch and went head-first into the bush.

When I came to, and opened my eyes, everything looked fuzzy. I was hurting pretty badly on the side of my head and shoulder. While I was laying on my back, looking up, and as my vision returned, I saw the owl fly by, circle me, and then leave. Even with all the pain I was feeling, it made me chuckle — I imagined she was laughing, and muttering, "That'll teach him...".

Well, it took over an hour for me to get enough strength to crawl out of that tough old rose bush. Then I discovered I couldn't walk from dizziness, and my head was bleeding. I held my handkerchief on the side of my head that was torn open and began to crawl to the road where Ed Park was going to pick me up at 2 am.

By the time he came by to get me I was in bad shape and could barely keep my eyes open. When he pulled up alongside me lying there, he bent down, raised my bloody head, pawed into my hair to see how bad I was hurt, and with a laugh he said, "Remind me to never go out at night playing with barn owls..." and away we went to the hospital.

I can still hear that doctor working on my torn scalp, "I see you have an old injury — what happened to your ear that you had to have it stitched up?" he asked while cleaning up my head. So while he was putting in the current stitches on my skull I told him about the poppa Great horned owl in Alfalfa that almost tore my ear off back in the '50s...another tale for another time....