Scorpions do live among us—but they're not the dangerous kinds

Back in the Good Old Days, I'd get a phone call at least once a month all winter from someone all in a dither about stumbling over a scorpion somewhere in the house, woodshed or chicken coop. 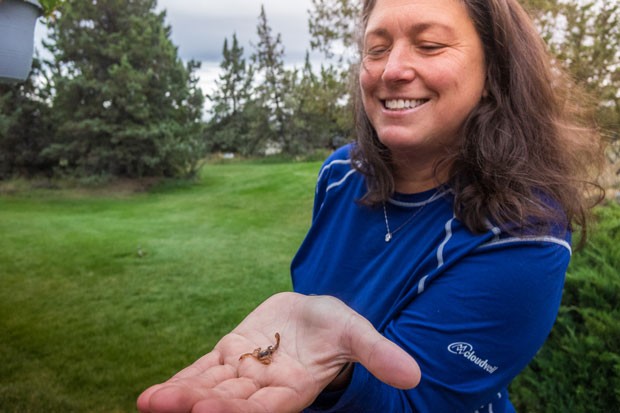 Oh, how I loved those "Hey, Jim, look what I got!" greetings in the post office, when someone would open an envelope or box, or run out to the car and return with a glass jar and wave a scorpion under my nose! I'd take a look at the specimen, and if it wasn't green tinted and slightly built I'd tell everyone it was a "Mordent scorpion." Well, I was wrong; not "bad wrong," but wrong nonetheless.

In Merrill A. Petterson's new 2018 field guide, "Pacific Northwest Insects," (which I recommend for anyone who wants to know about our insects and other arthropods) he doesn't lump the Mordent scorpions like I did. On page 48 of his excellent book he has two scorpions for Oregon:

He also includes a relative of the black hairy scorpion that wanders into eastern Oregon from Idaho, Anuroctonus phaiodactylius, which so closely resembles its cousin you can mix 'em up. The "Good News" is, none of these species are capable of doing serious harm to humans. Should you be stung, all it will do is hurt a little.

One of the best helps our local scorpions are giving us humans is preventing the venomous black widow spider from moving in. tweet this

HOWEVER! Should a human become so frightened of these tiny scorpions as to lose one's self control and try—like Superman—to leap over one's pickup in a single bound and end up breakin' a leg...well...'nuff said.

But now that we're discussing a scorpion doing damages to a human in the biological area, there's one group that could, if it was imported from the Southwest, or Texas. I'll quote from my original Source piece:

"Now, there is a little greenish scorpion, centruroides, found in parts of the Southwest and Texas that can give you a bad day if it stings you. It does not live in the Northwest, and if it turns up, it is purely by accident, having been hauled here by someone. The best advice I can think of to prevent injury from this scorpion is stay away from Texas."

That's the one you have to worry about, but that's enough of that...

One of the best helps our local scorpions are giving us humans is preventing the venomous black widow spider from moving in. Scorpions compete with spiders for prey; it's almost as simple as that.

For example, in my wife's greenhouse there are no black widows making their steel-like messy webs behind old boxes or planters. We actually have two competitors for their prey, scorpions and adult tree frogs. It's the same story in our barn and outside garden. While the barn isn't very suitable habitat for the frogs because of the lack of water, the scorpions think they've died and gone to heaven, and move right in.

Oh, I should also share a few words about "false scorpions," like the snow scorpion you may see while cross-country skiing. This tiny black no-stinger scorpion-like insect has often been reported on some of the trails in spring. If you happen to come across one, please let me know: jimnaturalist@gmail.com.

Then there's the wind scorpion, aka sub spider; it can also scare the daylights out of most people who accidentally come across one. They're eight-legged, two-eyed relatives of spiders that inhabit our dry, desert-like sagebrush country.

Anyone who has served in the military or visited the dry country of Saudi Arabia has probably come across huge, eight-legged creatures that look verymuch like our wind scorpions. They're built along the same lines and have the moniker of "camel spider." Quite a creature I'm told, some as large as a dinner plate!

There's also a large scorpion in Mexico about the size of a small cigar. Its body is brown, but like other scorpions it glows pastel green or blue under ultraviolet light.

There is also a species of forest scorpion in Africa that's fairly similar to the Emperor scorpion in size. It has no common name (that I know of), but it's known in the scientific world as Heterometrus swammerdami, and holds the record for being the world's largest scorpion, better than 9 inches in length.

Oh, and please be kind to our native scorpions; they glow in the dark as well...