By Miina McCown and Nicole Vulcan

Bars and restaurants in Oregon have been through this before: For the second time this year, starting Nov. 18, dining rooms and bars around the state will close to the public as part of Gov. Kate Brown's effort to reduce the spread of COVID-19. Cases have spiked considerably throughout November, with record-setting daily case counts happening numerous times in Deschutes County throughout the month. Bars and restaurants can stay open for takeout and delivery only—though inevitably, the two-week "freeze" announced Nov. 13 will strain budgets and put some workers back on the unemployment line. 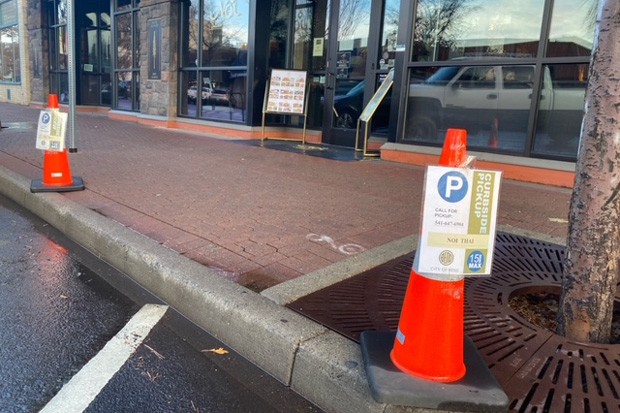 During the first series of shutdowns, workers who were out of work were eligible not only for state unemployment benefits, but also a $600 federal supplement, which has since expired.

"It's going to be super hard for the businesses to keep it going through the holidays," said Marcelo Garcia of Bangers and Brews on Bend's west side. "We just do what we have to do."

According to the Oregon Restaurant & Lodging Association, which represents the roughly 10,000 food service locations and 2,000 lodging locations in the state, the hospitality industry in Oregon has weathered losses on average of at least 30% this year, compared to 5% losses for other industries. ORLA sent a letter to the Oregon Legislative Joint Emergency Board this week, asking the Board to create a $75 million Hospitality Relief Fund to help "operators and their employees survive another shutdown," ORLA wrote. ORLA also wants to see the eventual passage of Legislative Concept 833, which would allow bars and restaurants to sell "to-go cocktails."

"Hospitality businesses need immediate help. We cannot wait for February and hope a relief package will materialize and be approved at the federal level," said Jason Brandt, ORLA's President & CEO in a Nov. 17 press release. "This is an emergency and we need the Joint Emergency Board to take action now to save our industry and the tens of thousands of Oregonians who rely on it to put food on the table, pay their rent or mortgage and provide for their families' needs."

Late on Nov. 17, Brown's office announced a commitment to issue $55 million in assistance for businesses impacted by COVID-19 restrictions. Each county in Oregon will receive $500,000 in base funds, plus a per-capita allocation of the remainder of the funds, a press release from the office stated. Businesses interested in applying should contact their county for more info, the Governor's office advised.

Among local businesses, the overarching theme appears to be to encourage locals to order takeout and delivery.

"Obviously, it's uncharted territory and it's unfortunate that we have to close—but I think that with the pandemic it's necessary for everyone's safety," said Sabrina Simpson of Bend Brewing Company. "It's the only way were really going to get through this, and were just hoping that people will order locally and support the small businesses so that we can make it through this unprecedented strange time we're in."

With so many businesses having already made the hard pivot to takeout and delivery in the spring, some say they're more ready for this change this time around.

"This business isn't really affected that much because we're already set up for takeout—so were actually able to stay afloat with just takeout," said Mike Borrego of Bend Pizza Kitchen. "I know a lot of businesses around town who rely on that dine-in service are going to hurt, so we're just hoping for them to make it through. We're fine—we'd just like other people to be cooperative with the rules and wear masks and keep employees safe."