A Tale of Two Rentals

Whether it's raised your rent or your home value, the housing crisis in Central Oregon is palpable. These stories tell the tale of renters struggling to find housing—and how one group of neighbors fought back against short-term rentals

Bend and all of Central Oregon have been in a housing crisis for years—a crisis that has only gotten worse as the pandemic unfolded. These are the stories of those seeking housing—or those looking to preserve the housing Bend does have. 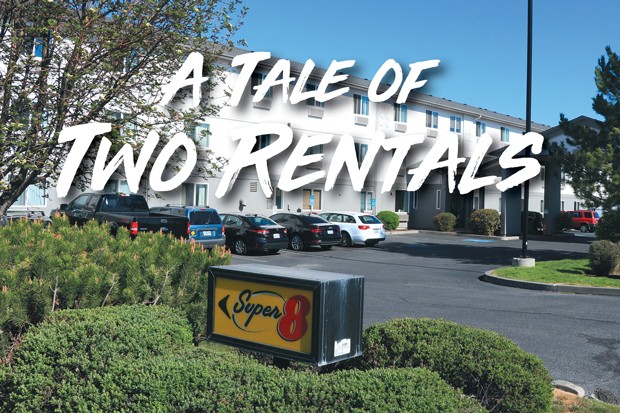 Dwayne Tayles moved to Bend in 1968 when he was just six years old. He remembers graduating from Bend High School when the sign welcoming people to town listed a population of 9,500. He remembers -40 degree winters and hunting on land where there are now million-dollar homes.

Nydonna Gibbs, his girlfriend, has what's become a more typical origin story for Bendites: she moved here three years ago from Portland. Gibbs, originally from California, came to Bend to be closer to her mother and help her as she undergoes treatment for cancer.

They have been living in hotels and motels together for the past seven months, searching for more permanent accommodations.

"It's expensive, or there isn't anything available, or they want something that's three times the income or is low income and we make too much, even though right now we're pretty much doing that," Gibbs said. "By the time you find something, it's rented out, and for the average person with the application fees, it gets to be pretty spendy after a while."

Tayles until recently owned a home in Redmond, and rents out a property he owns in John Day, the small town in Grant County, for $625 a month. Tayles has worked in asphalt maintenance for most of his life, though he's also worked as a rodeo clown, parachuter and stand-up comedian.

"I paved about every road in Bend," Tayles said. "I still know my way around as Bend grows, and I'm a walking, talking GPS."

Gibbs lost her job at Wells Fargo during the 2008 financial crash and worked at a McDonald's and most recently a Safeway to support herself and at times her family.

Currently they are starting up their own asphalt maintenance company, with Tayles also doing jobs on Craigslist and either of them working for the motel where they live, in shuttling people to and from the Redmond airport.

"I mean, we are struggling day to day. We're slowly getting ahead because work is picking up, but for a while there was touch and go," Gibbs said, "He works his butt off, and I had health issues so I took a step back from the position I have." 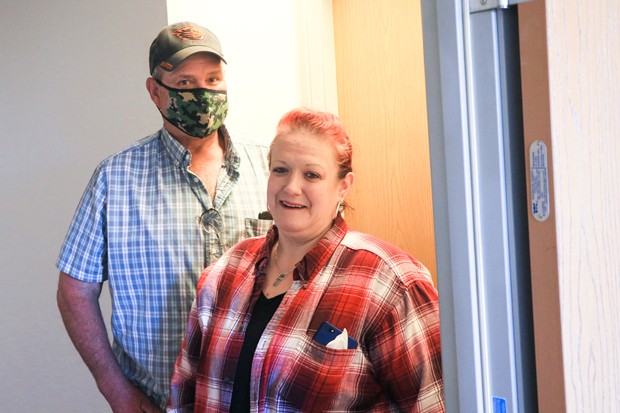 Gibbs and Tayles are just two stories of thousands of underserved renters in Bend. The motel they are staying at costs roughly $1,800 a month, slightly above the average rent for a one-bedroom apartment according to Zumper.com, a website that tracks apartment listings.

"Without a doubt, Oregon and a number of states primarily in the West and East Coast have significantly underbuilt for the population that we have, and that we are gaining," said Lynne McConnell, affordable housing manager for the City of Bend.

American Community Survey data from the Census Bureau showed a deficit of 5,000 homes for people making $25,000 and under, McConnell said—which is about what someone working full time at the state's minimum wage would make. Affordable rent for that income bracket, at one-third of income, would be just under $700 a month.

“There’s a pretty broad swath of the population that actually qualifies for affordable housing. That doesn’t mean that we have an available unit out there in the market for them.”—Lynne McConnell tweet this

"One cannot build housing in Bend right now for that price without subsidy. It's just not possible," McConnell said. "I feel that's kind of a bold statement. Usually, as city staff we would be a little softer than that when we say things, but I feel very comfortable saying that."

With an average median income of $78,600 in 2019, according to the City of Bend Affordable Housing Department, the cutoff to qualify for affordable housing is $64,300 for buyers and $48,240 for renters.

"There's a pretty broad swath of the population that actually qualifies for affordable housing. That doesn't mean that we have an available unit out there in the market for them. That's a different story," McConnell said.

There are many reasons that there are too few housing units to go around, from the high cost of developing land, growth and local preferences for single-family dwellings.

"The demand has been high because we are one of the fastest-growing communities as a percentage of population in the last decade in the nation," Damon Runberg, a regional economist for Central Oregon, said. "We've sort of put ourselves in a bit of a hole as far as just a supply demand mismatch. And it's just a straight up housing unit mismatch."

Things are turning around on the development side, and 2020 saw more building permits issued than any year since the recession in 2008. Bend has taken a two-pronged approach to supplying affordable housing: First, offering subsidies for developers to offset costs so units can be rented or sold below market rates; second, trying to incentivize market decisions that meet community needs.

"If you can build a triplex, the land cost is going to be the same whether you build a single-family home or a triplex. However, a triplex could split at cost three ways, whereas a single-family home has one household paying for it," McConnell said. "That's a lot more tricky to do; it takes a long time and isn't always as noticeable, but that's a lot of the work that's ongoing right now."

Though there may be some light on the horizon, for many it may come too late. Tayles and Gibbs have applied to dozens of listings, attempting to gain housing through individual landlords, property management companies and even Facebook groups that connect people to local rentals. Though unsuccessful so far, they haven't given up hope.

"I'm thinking they have gotta have to change up and do some new pandemic rules and stuff, things will change, I have faith," Tayles said. "And nothing says we have to live here in Redmond or in Bend."

The Battle for Tanglewood

Back in October, the neighborhood of Tanglewood in southeast Bend received a letter from the City informing a home that was on the market had applied for a Type 2 rental permit. If approved, it would have meant the five-bedroom home in the residential neighborhood would soon be listed on Airbnb and/or VRBO; a rotating cast of characters coming through the neighborhood. 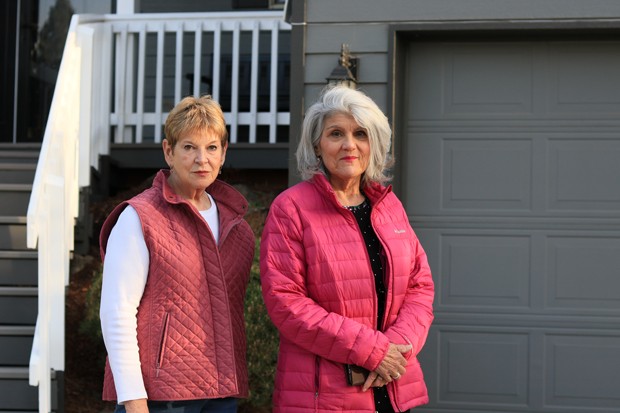 "Everybody was pretty much in shock," said neighbor Jan Shamberg, a former music producer for film and TV. "They were planning to sell for quite a high price, and a five-bedroom home for an Airbnb means party time."

Tanglewood is a close, quiet neighborhood where neighbors say they didn't want the noise, unfamiliar faces and potential drag on property values that are sometimes associated with short-term rentals. Beyond that, they didn't understand why a residential area, so far from the tourist destinations in downtown and Old Mill, was being converted into a vacation home.

"In the city of Bend there are plenty of places to stay besides the Tanglewood neighborhood, which was never designed to be a playground for the West Coast," commented Matt Craven, a neighbor, math teacher and head football coach at Bend High School.

The neighbors, in the face of a short-term rental changing the community, banded together to change their neighborhood's Declaration of Covenants, Conditions and Restrictions (CC&R), the rules governing homeowners in a designated area. Shamberg, Craven and his wife Eris and neighbor Michelle Knowles mobilized the neighborhood to quickly change the CC&R to exclude Type 2 short term vacation rental permits, which are required by the City to host guests for over 30 days, before the permit deadline of Oct. 24.

To block the permit, they would need two thirds of residents, or 29 homeowners, in the Tanglewood Phase 2 subdivision to have a notarized signature in opposition to the permit—and on short notice. Shamberg began by compiling a list of neighbors with their email addresses and phone numbers.

"We had essentially two and a half weeks to actually pull this together," Shamberg said. "That was really difficult because I had a lot of information to find out during that time."

The four neighbors had to get creative to ensure they were successful. Rather than ask the neighbors to go and have their signature notarized, they brought a notary to the neighborhood. Volunteer residents drove people to Shamberg's half-open garage to sign with the notary.

"You guys did an amazing job of mobilizing this because as soon as you say lawyer, a lot of people don't want to deal with the hassle," Matt Craven told Shamberg and Knowles. "They know there's going to be some expense, tracking down signatures with a notary. I mean, that all takes time, effort and let's face it, it took some money. But I think that it's going to be well worth the effort, the time and expense."

In the end Tanglewood didn't just stop one STVR; neighbors have barred them from their neighborhood permanently.

A flood of vacation rentals

Bend has the fourth-most STVRs per capita in the United States, and a League of Women Voters Housing Study released this year estimated that 2.5-2.8% of all single-family dwellings in Bend were listed as STVRS. The study lists it as one of eight causes behind the housing crisis—though others aren't convinced it's a substantial factor in the matter.

Even if a portion of the STVRs were converted into long-term rentals, many would likely still be out of the price range of most Bendites, according to Eagan, or would require multiple adults to share the home, bringing its own set of complications to neighborhoods. Eagan also pointed to how useful collecting transient room taxes from both hotels and STVRs are for the city's budget.

"Those houses when they are rented, if they're being used as short-term rentals, do bring in transient room tax, and $7 million annually in transit room tax contributes to our police, fire and road budget," Eagan said.

Though beneficial to the city's financial well-being, STVRs are often unpopular with the people who live near them and local landlords who rent long-term.

"I actually want people who work in my community to be able to live here," said Tamara Houston, a local who owns two long-term rentals. "I believe in that, but we live in a market economy, and there's actually nothing that incentivizes landlords like me to rent to residents instead of tourists."

Many of the STVRs that are permitted happen without anything like what happened in Tanglewood. The time, effort and resources it takes to change the CC&R is significant, and in many neighborhoods it can go unaddressed or unnoticed.

The whole affair also brought together the Tanglewood neighborhood, uniting exactly two thirds of them in a common cause. Shamberg, Knowles and the Cravens were in constant communication, giving updates on the process as it unfolded.

"I sent around a letter afterwards saying, 'we did it!' Because it really did take everyone or almost everyone," Shamberg said. "A friend of mine said the other day, 'it takes a village,' and I mentioned to her that we are the village."