A Taste of the East Coast in Bend | The Source Weekly - Bend, Oregon

A Taste of the East Coast in Bend

Listen, I don’t know anything about the Central Oregon bagel game, but I like to imagine it’s like NYC during prohibition, with passwords whispered at locked doors in dark alleys and scientists in basements trying to actually fit EVERYTHING into a bagel. Like – the people from Big O, Sparrow, and Rockin’ Dave himself, all meet under a bridge to discuss illegal bagel shipments to Kansas City or something. I’m not sure why I find this so amusing, but I really do. 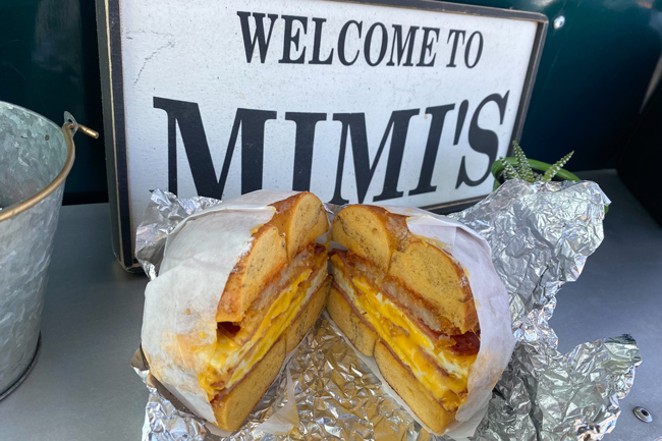 The thing is, Bendites are passionate and loyal about their bagels. I know people who’ve never set foot in Big O because they love Dave’s so much, and vice versa, and don’t get them started on boiling bagels vs steaming vs whatever other ways it’s possible to make what people consider an authentic bagel.

So, I’ve got a huge amount of respect for Frank Anello and Charlize Peters, the partners behind Mimi’s Bagel Deli: an unpretentious food cart nestled right next to Cannabend dispensary on North Highway 97. Entering the bagel game in Bend can’t be easy with such established competition, but after trying a ton of different things on the menu and seeing how dedicated their customer base already is, I’m not worried for their future.

For one, Mimi’s is doing something no other bagel spot in town is doing: they’re making hand-rolled and boiled New Jersey-style bagels and bagel breakfast sandwiches that don’t taste like anything else available locally. Anello and Peters explain their origins: “The idea for Mimi’s came from a few of us hanging out one night, and we decided to make bagels. It was something we talked about doing just for ourselves, since in New Jersey bagels are almost a religion, and it was something we were really missing from home. A few batches of bagels later, and we realized how much our friends loved the bagels.”

Now, I’ve never had bagels in New Jersey, but I’ve had them on Manhattan and Long Island, and the bagels from Mimi’s immediately transported me back to the East Coast. “Jersey bagels have a certain texture,” according to Peters, who explains, “A good bagel should have a crust that has a nice snap and chew. You want a nice golden crust outside, but a soft, fluffy inside.” Mission accomplished.

The SuperNova comes with fresh Nova Lox, red onion, tomato, capers and plain cream cheese on an Everything Bagel. The Nova salmon was so delicately and lightly smoked that it managed to enhance the onions and cream cheese instead of overpowering it. This could easily become a breakfast staple around my house.

I also tried the Route 88 with pork roll, egg, cheese, and hash browns on a jalapeño bagel. It was hearty and filling without feeling like a gut bomb. Because Anello and Peters are boiling the bagels with such a light touch and have found such a nice balance with the thinly sliced and mouth-watering pork roll and crispy hash browns, the Route 88 was genuinely complex in its flavor profile. The jalapeños combined with the egg and cheese and the crunchy potatoes is a multi-layered attack of deliciousness.

A good bagel should have a crust that has a nice snap and chew. You want a nice golden crust outside, but a soft, fluffy inside.—Charlize tweet this

Anello is a fourth-generation baker. Mimi is his grandmother’s name (it’s also my grandma’s name!), and you can taste the care and love that goes into these bagels. Peters says, “We’re trying to create our own little bagel destination with seats and a nice area for our customers, as well as growing our team and being able to offer delivery and catering services. Our plan is to grow as much as we can, and we would love to open a brick and mortar one day for the space it would provide for extra bagels to be made, as well as being able to bake out of the special oven Frank wants.”

Don’t even get me started on their desserts, either. The Chocolate Chip Bagel with Strawberry cream cheese was divine, the French Toast bagel managed to be sweet and savory simultaneously without being too much of either, and the Sfogliatelle (which was completely new to me) has a perfect flaky crust. The filling of Ricotta and Semolina was so delicious, I was genuinely sad that I got the last one. Be sure to get there early for the Sfogliatelle and the Everything Bagels, because Mimi’s is starting to catch on, and they sell out pretty quickly.

Mimi’s Bagel Deli really does pack their food with love and care. Anello and Peters are genuinely kind people who are fun to talk to, with big smiles on their faces and a twinkle in their eyes. You can tell they’re excited to bring a little bit of the East Coast to our tiny patch of the West, and to share recipes that have been around for more than 100 years. I never met her, but I think Mimi would be proud.