A Waterhole with Something for Everyone | Chow | Bend | The Source Weekly - Bend, Oregon

A Waterhole with Something for Everyone

A few years ago, Dick Robertson met some friends at Crux Fermentation Project. People were hanging out, picnicking and drinking on the lawn, enjoying themselves. Robertson had some property in Redmond and thought he could do something similar there. Then when The Bite opened with success in Tumalo, he knew he had to open General Duffy's Waterhole. 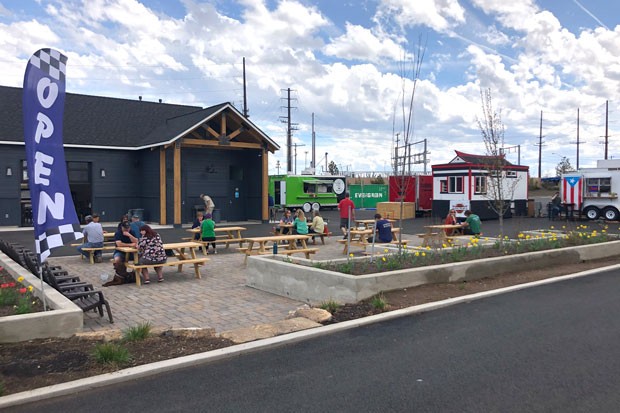 Prior to developing his taphouse-food truck concept, Robertson was a stockbroker, invested in real estate and ran Coho Coffee House. The coffee shop is a local gem in Redmond, named after Robertson's love of salmon fishing. He recently sold it to focus on General Duffy's.

"I'm notorious for naming businesses after things I like to do," said Robertson. General Duffy isn't a person, but an elk Robertson shot bow hunting. "My wife won't let me have him in the house," said Robertson, "so he's (the elk mount) in the taphouse."

General Duffy's Waterhole opened at the end of March. The property has a 60-seat tap house with window-paned garage doors, 20 taps including kid-friendly root beer, a patio with rows of picnic tables, plenty of Adirondack chairs and five food carts.

The carts offer an eclectic mix of fare so there's something for everyone. That means you can visit with your gluten-free friend, vegan buddy, paleo pal or youngster.

If you're into phillys—not female horses, but gooey Philly cheese steak-inspired flatbreads, fries and flatbread pizza, visit That Guy's Bistro. In addition to cheesy flatbreads, they serve fries, and for the kids: peanut butter and jelly, hot dogs and grilled cheese.

Featuring a plant-based menu, the options at Budo Bowls include smoothie bowls with the choice to add CBD protein powder, comfort food entrees and globally inspired bowls including melon-ahi poke, and an edamame "chicken" General Tso. Their stuffed pizza comes in the shape of a skull with your choice of fillings and their sides are just as satisfying as the entrees. A nacho macaroni and cheese base is topped with breaded and deep fried jackfruit that tastes similar to pulled pork in the porky mac side.

Taino, A Taste of Puerto Rico 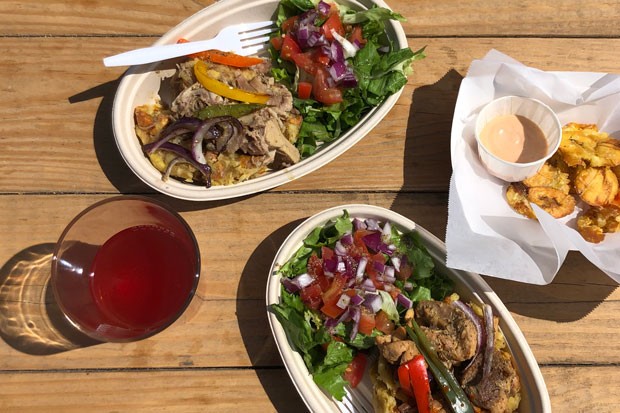 Serving up authentic Puerto Rican food, Taino's menu includes a rice and bean bowl, mofongo, crazy fries, tripleta sandwich and a range of sides: fried green plantains, fried sweet plantains, yuca fries, potato fries and ground beef or guava and cheese empanadas. I tried the mofongo, a hearty entrée of mashed green plantains, grilled pork in al ajillo, an onion and garlic sauce, served with grilled onions and peppers with a side salad. The pork was juicy and tender enough to cut with a plastic fork and the smashed plantains creamy and rich. In contrast, I tried the tostones, a side of fried green plantains that were crispy on the outside with a soft, tender interior.

The newest member to the food cart line up at General Duffy's will be Senior C's Street Tacos. Robertson said this truck with Mexican food options should be open in the next week.

Everyone is welcome at General Duffy's Waterhole, including furry friends. It's an easy place to hang out, to play cornhole or board games.

"We're going to continue to develop the property," said Robertson. He plans to add bocce and a few fire pits, and you might see live music and movie nights soon.

A Saturday Market will start on the property this weekend and go throughout the summer until Aug. 31. Hosting 21 vendors, you can shop a variety of products: jewelry, home décor, candles, art, vintage clothing, CBD products, baked goods from Coho Coffee House and more.

In addition to the inspiration from Crux, Roberston recognized the growth happening in Redmond, saying, "There's just not enough opportunity for people to eat, drink and be with family and friends."