From the green fairy to opium, there's more to absinthe than the rumors and fake news

Absinthe is illegal.
It's made with opium.
You'll see the "green fairy," because it makes you hallucinate.

All of the above statements are false—but those misconceptions permeate our culture. 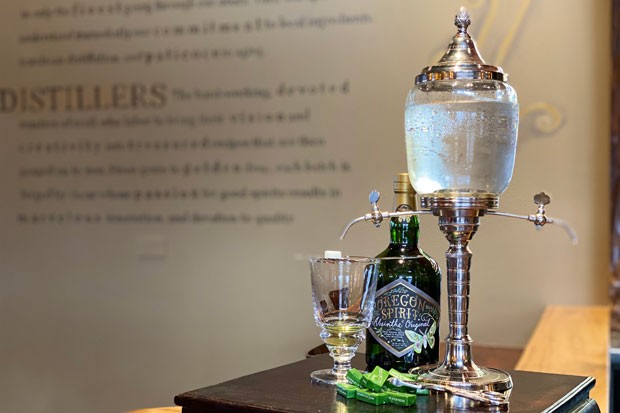 Absinthe never had opium in it. It's a high-proof spirit made with the flowers and leaves of Artemisia absinthium (wormwood), anise, fennel and other herbs. The ingredient thought to have hallucinatory properties is wormwood, which contains thujone, which can block the brain's GABA receptors—the primary calming neurotransmitters in the brain.

Science has proved thujone does not in fact cause hallucinations. To really understand why absinthe is tied to so much myth, we need to understand the past.

Absinthe originated in Switzerland and became popular in France for several reasons. Troops drank it to prevent malaria and then enjoyed the spirit. Then in the Great French Blight of the mid-19th century, an aphid infestation attacked the roots of the wine plants, wiping out the grapes. France, a country that runs on wine, needed something else to drink. Enter absinthe.

This is a good time to point out the alcohol by volume of wine: 10% to 15%, compared to absinthe at 45% to 60%. The French enjoyed their absinthe, and happy hour eventually turned into l'heure verte (the green hour), called as such because the spirit is green hued.

You can see interpretations of absinthe used in art and through writers including Oscar Wilde and Ernest Hemingway. In my college art history class, I remember learning why the lady in Edgar Degas' 1876 painting L'Absinthe had a green hue. Over time, through a smear campaign spearheaded by the temperance movement and the wine industry, absinthe was associated with social disorder and violent crimes. In 1905 Jean Lanfray, a Swiss farmer, murdered his family after drinking wine, brandy and absinthe. Even though other spirits were involved in the atrocity, absinthe took the blame, leading to its ban in Switzerland and in other countries, including the U.S., in 1912.

Ninety-five years later, real absinthe became legally available in the U.S. How that came about is a whole other story. Bend entered the absinthe scene in 2009 when Brad Irwin started Oregon Spirit Distillers. With his love of history, Irwin was interested in making classic spirits, and recognized no one was making craft absinthe.

If you've never tasted this anise-flavored spirit, I recommend visiting Oregon Spirit Distillers' tasting room for a traditional absinthe service. Ice water is dripped from a fountain over a sugar cube sitting on a slotted spoon into a glass of absinthe. The water clouds the absinthe, turning it an opalescent light yellow, and releases the botanical oils encapsulated in the alcohol, making the spirit more flavorful and aromatic. This is done because absinthe is not meant to be consumed straight.

Shelley Hopson, operations manager at Oregon Spirit Distillers, said, "I like to think of it like a concentrate." Absinthe holds the flavors; humans release them.