Active, Indoors or Out | Outside Features | Bend | The Source Weekly - Bend, Oregon

Active, Indoors or Out

With feats including scaling Smith Rock and increased participation in Pole Pedal Paddle—the program aimed at helping disabled people experience the outdoors is having its "best year yet." 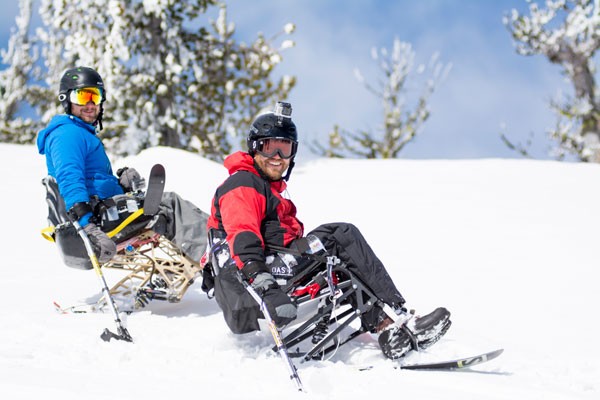 Twenty years ago, a group of locals with a love of skiing and the outdoors had the idea to start an adaptive ski program for people with limited mobility. Jack Alexander, Kendall Cook and Colleen Dougherty may not have imagined that the seed they planted back then would grow into the program that exists today. Originally known as the Central Oregon Adaptive Skiing Program, and focused on skiing programs in the winter, the current iteration, Oregon Adaptive Sports, has grown into a year-round program promoting participation in outdoor activities including downhill skiing, Nordic skiing, golfing, kayaking, cycling, mountain biking, hiking, rock climbing, paddleboarding and yoga. In the words of the current Executive Director, Pat Addabbo, OAS "has made an investment in empowering people of all abilities to fully engage in the outdoors."

I recently sat down with Addabbo, who's been with OAS about two years, first as Program Director and now as Executive Director, and Nancy Stevens, Outreach Coordinator for the program, who's also blind and has been a longtime participant, volunteer and mentor. Both say that the focus of the program is not just about breaking down barriers, but also changing how others view people with disabilities.

Addabbo and Stevens say people with disabilities are often given labels and are met with low expectations as to what they can do. The goal of OAS is to cultivate empowerment and independence in an effort to address both of these issues.


Addabbo says one aim of OAS has been to have Bend stand out as the most inclusive community in the outdoors arena by being an "all ability, all activity-focused" organization. Though this may seem like a lofty goal, he feels they're already experiencing success, and that they are celebrating the best year ever for OAS.

Thus far in 2017, the program has served over 350 individuals, ages three to 101, with over 30 different disabilities or impairments. Additionally, over that same period, more than 300 volunteers helped out.

The organizers say increased participation in major events, such as Pole Pedal Paddle, is another way of gauging success. OAS clientele have participated in the PPP over the years, but it wasn't until 2013 that a six-person OAS team participated. In 2017, there were six OAS teams with 50 participants, demonstrating how the activities are moving from being unique to the norm. Another big event this year: On Oct. 6, seven OAS participants, along with seven volunteers and two staff members, scaled Smith Rock.

This summer, OAS began an adaptive rock climbing club in partnership with Bend Rock Gym. That led to a partnership with Timberline Mountain Guides and, spurred by the vision of staffer Kellie Standish, the group decided to take the experience outdoors—culminating in the Smith Rock Climb. Stevens, who participated in the climb and who holds the distinction of being the first blind woman to climb the 13,776-foot Grand Teton mountain, says this is a prime example of how OAS provides opportunities that build self-esteem for participants.

From my conversation with Addabbo and Stevens, it became clear that underlying all that OAS does is incredible support from the community, from volunteers to businesses that support their efforts. Mt. Bachelor and Hoodoo have supported OAS' adaptive ski programs for years, with a full range of programs and lessons offered at both locations. Awbrey Glen Golf Club has supported an adaptive golf program, with a monthly adaptive golf clinic during the summer months, as well as the opportunity for participants to use the practice course at no charge.

Challenges continue to present themselves, however, from providing transportation (they've recently acquired a bus), to acquiring specialized equipment (the minimum cost of an adaptive mountain bike is $6,000), to maintaining strong staff and volunteer numbers. In spite of these challenges, Addabbo and Stevens say OAS never loses sight of the mission to provide, "life-changing outdoor recreation experiences to individuals with disabilities," while envisioning "a day when everyone has the benefits of outdoor recreation, regardless of ability."