The Deschutes County Sheriff's Office, along with Ideal Option, an addiction treatment organization, launched Operation Guardian Angel Dec. 10. The program encourages drug users to trade in their drug paraphernalia in exchange for the recovery services at Ideal Option.

The Centers for Disease Control and Prevention estimates over 100,000 people died in the U.S. of a drug overdose in 2021, a sharp increase from the 78,000 in 2020. It reported more people died from synthetic opioids like fentanyl, prescription pain medicine, cocaine and methamphetamine than the prior year. Synthetic opioids, mainly fentanyl, caused nearly two-thirds of all overdose deaths. 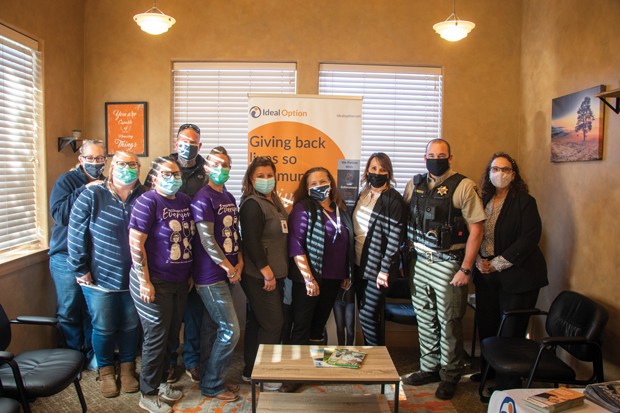 "I've seen an uptick in opioid addiction, fentanyl, heroin—things that you would never have thought of being used in Bend, Oregon," said Mike Sundberg, a lieutenant at DCSO. "That's really what's happened in the last couple years is that people are addicted to heroin. I worked drug enforcement for several years here, and it was primarily methamphetamines. Several years ago it turned to prescription pills and then to opioids, and that seems to be the primary focus right now."

Ideal Option does medication-assisted treatments to wean people off addictive substances. It has over 70 clinics across 10 states. DCSO hopes the partnership can connect people addicted to drugs to the service provider through connections made on patrol or if requested by an individual or family member.

"If a family member has somebody that's struggling with addiction, and they have a connection with a law enforcement officer, they can reach out to us and we'll act as a liaison and get them help. Or if we have people that we have contact with on the streets, that are in need of help, we would rather get them here than get them into custody," Sundberg said.

The program originated when Ideal Option prepared a presentation for the Sheriff's Office. DSCO Public Information Officer Jayson Janes said there wasn't a request-for-proposal or bidding process among rehab facilities to form the program. The partnership isn't built on any financial transactions between the two entities, he said.

“It takes a lot of courage to admit that you have a problem, and then it takes even more courage to actually reach out for help.”—Josh Lair tweet this

"We went with Ideal Option after their presentation to DCSO and other local law enforcement agencies. The Sheriff liked the fact that people can get an appointment with them so quickly. Ideal Option is different than other addiction services in Deschutes County. They are the only company that we know of that has medicated treatment for methamphetamine addiction along with opioid addiction," Janes said. "Ideal Option was the right clinic for Operation Guardian Angel because we can make a call for the person wanting treatment and within just minutes we can get the person an appointment."

The partnership between the Sheriff's office and Ideal Option should expand access to treatment options and offer same-day consultation for drug users. Most patients can get treatment for free through private insurance or Medicaid.

"This is just an opportunity for people to minimize the stigma behind drug addiction, and to capture the community as a whole coming together and to make access to services, access to treatment, that much easier," said Lair, communication coordinator for Ideal Option. "It also helps eliminate that us-against-them mentality and barrier by law enforcement by saying, 'Hey, we're not here to judge you. We're not here to condemn you. We're not here to punish you. If you want help, we want to help get you that help.'"

Lair said the most difficult step to recovery is often the first. He said he suffered from addiction himself for 20 years, but that it wasn't until after he had access to services that he was willing to make a change.

"It takes a lot of courage to admit that you have a problem, and then it takes even more courage to actually reach out for help," Lair said. "There's people that think it's a moral issue or that you just don't have the willpower, but the science says different."

The medical consensus regarding addiction is that it's a chronic illness rather than the result of poor life choices. The National Institute of Drug Abuse says 21% of people prescribed opioids misuse them, that 8-12% of people prescribed opioids for chronic pain develop an opioid use disorder. Some 4-6% of people who misuse prescription opioids transition to heroin and that 80% of heroin users first misused prescription opioids, according to NIDA.

"It may have been a choice back when they started and chose to use drugs for the first time, or it may not have, some people come to us who are addicted from pain pills that were prescribed to them. Other people tried it in high school got addicted, and now it's ruining their life," said Diana Everly, a nurse practitioner at Ideal Option. "But science proves that opiate addiction, especially, and all addiction literally changes the structure of your brain, it changes the way your brain functions. So, once you reach the point of addiction, it's not a choice, it's a disease."

The change to the brain's structure can lead people to risky behavior to maintain an addiction, which can lead to crime, experts say. The Bureau of Justice Statistics said 21% of incarcerated people were arrested for crimes to obtain money for drugs or drugs themselves, and that 40% of property crimes and 14% of violent crimes were committed by people using drugs.

"I think that ultimately some people that are experiencing addiction probably feel like they have to commit crime to feed their habit," Sundberg said. "So, I think that some of these people that are fighting addiction are good people, and they're breaking the law so that they can facilitate their addiction. And if we can go jump in there and stop that cycle, that's a great day."