Adventures in Beer, Food and Wine

Moving to a new town might prompt one to troll the bars or to join a sports team to meet new people. In modern times, the online site meetup.com is another place for those looking for like-minded individuals—and that's exactly where Tom Cappy went looking for connections when he moved to Central Oregon in March of 2009. An avowed foodie who grew up in an Italian family hailing from Sicily and Campania, Cappy sought out like-minded individuals by way of the "Adventures in Beer, Food and Wine" group on Meetup, where Central Oregonians have for over a decade met up to explore happy hours and enjoy group dinners at local restaurants and people's homes. The group has 260+ members as of this writing.

Now the organizer of the group, Cappy hosts many of the dinners at his own home, where in recent months I've learned how to churn out fresh pasta, and, on another night, learned the variances of pairing food with Italian wine.

"Originally the group (before I took the helm) hosted full sit-down dinners, once a month. When I took over, I changed it over to happy hours mainly," Cappy said, adding that happy hours are becoming rarer in Bend these days. "Next in popularity would be my Italian night dinners; they tend to book up within minutes. I do two or three of those a month. What can I say, I love to cook!"The May 24 event at Cappy's house, an Italian dinner featuring a master sommelier, included five courses, including a fennel and red onion salad, zucchini fritters, wine-braised lamb shanks on butternut squash and parsnips, garlic and thyme spring veggies, and finally a "piccolo dolci"—little sweets in Italian—featuring a selection of several desserts. Cappy's brother, Mike Cappy, a 3rd Level Master Sommelier from the Association of Italian Sommeliers, served up wines including Rosé Franciacorta, Aglianico, Brunello, Nobile di Montepulciano, Picolit and a digestif to go with all of those little sweets.

While one might be able to find a similar culinary experience at any of the many Italian restaurants dotting Central Oregon, the food and wine is, of course, only part of the vibe. Cappy intentionally keeps the number of attendees low, typically to eight guests for home dinners, so as to encourage conversation and allow people to get to know one another. 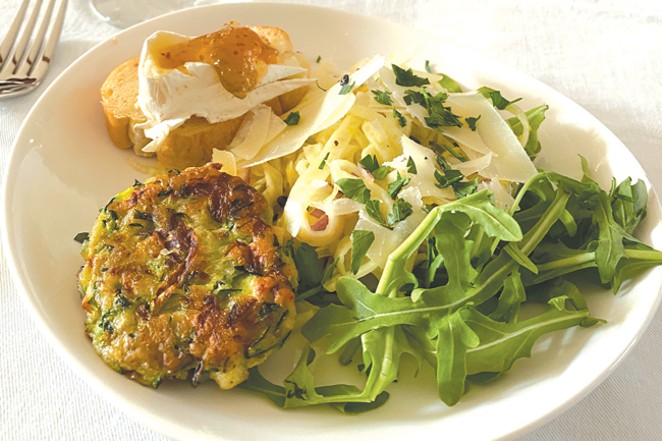 "The attraction for home-based events is likely the size," Cappy said. "Plus, they have the 'restaurant' all to themselves, and afterwards, if they wish, they can stay for hours and converse. I cap all of my events to eight. That's good for conversation as well. There are other meetup groups in town that welcome 20 to 30 at a time. Inside or out, some people don't do well with crowds."

Home-based events also allow for more sharing of knowledge; at another recent event, Cappy taught a group how to make limoncello, that sweet lemon digestif that often tops off an Italian meal, sending some home with each guest. Another recent event invited guests to dress up and enjoy a meal in honor of the Kentucky Derby. Cappy said one of his most memorable events involved hosting a house concert and a dinner for 53 people.

"First, I had to make a stage, replete with lights, then dream up a menu, then promote it. It's what I do. My friend Terrance Barnham who I met at the Commons one night where we were both performing on open mic night, played for a couple of hours. It was so intimate. A beautiful evening," Cappy shared. "Another memorable event was a March weekend up in the upper Willamette Valley wine tasting. There were six of us, we toured about eight vineyards over two days. Lots of fun. On the way back we crossed the Wheatland Ferry, and then when we were coming back over the mountains, we drove through a blizzard. Another would be when Kayo's was hosting 50-cent oysters. We cleaned them out! We all started with four dozen each!"

Cappy's home between Bend and Sisters doesn't offer the same ambiance and buzz that a fancy restaurant might, he admits—but in exchange it's a more intimate experience that gives newcomers and those, like me, bored with the rush of the regular restaurant scene, an opportunity to try something new.

"These dinners, as do the other events I host, give me purpose," Cappy said. "Plus, I really like bringing people together."