On banding birds in the sometimes-treacherous waters of Crane Prairie

Doug Beal's spectacular Osprey photo in the Sept. 8 edition of the Sisters Nugget Newspaper brought back some wonderful—and at times frightening—memories.

Back in the early '70s I was placing federal wildlife bands on baby osprey as part of an effort to determine the winter destination of the birds when they left Crane Prairie Reservoir. 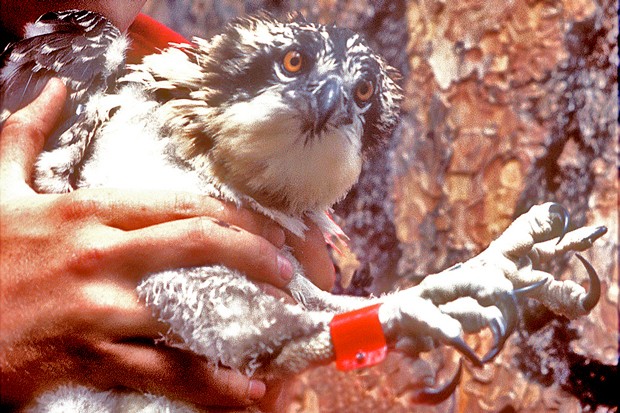 It turned out I wasn't the only one curious about the whereabouts of osprey in winter. Oregon State University grad student Gordy Lind was working on his master's, using the life and times of the osprey as his topic, and needed that data as well.

That put me in high gear, and I began banding more babies than usual. I had to get permission from the U.S. Forest Service and Oregon Department of Fish and Wildlife to climb up into the osprey nests to band the young, but it turned out I should have put up a sign on the boat I was using, saying, "I have permission to do this!"

I had been given permission to band birds in 1962, so I was OK in that area. But the first time I went out to begin banding with Lind I was chased down by a wonderful old lady and her husband.

"Hey you!" she shouted from a boat nearby. "Get out of that tree! You're bothering those birds and they are protected!"

Lind said, "It's OK, Jim, I'll go over and tell her what we're doing," and away he went, leaving me sitting on a dead limb in the tree. I heard most of the conversation, but it was Lind doing all the talking. All that old lady said was, "Uh, huh," and she finally put an end to the discussion by saying, "All right, Henry, let's go."

Later in the day, my Oregon State Police pal, Kenny Roach, visited Lind and me in his official capacity as a state wildlife officer and told me we got turned in by a very observant and angry old lady for pestering the osprey at Crane Prairie Reservoir. I was thankful for her caring.

Now, about osprey and Crane Prairie. One of the big reasons Crane Prairie Reservoir was the place for osprey to nest in Deschutes National Forest was the abundance of nesting substrate and prey.

When the first dam was built by the brand-new Arnold Irrigation District, to back up the Deschutes River in 1922, hundreds—if not thousands—of lodgepole pine were left standing and drowned in the reservoir waters.

The resin from their sap was so strong that residents of Redmond—who were using the Deschutes for drinking water—claimed you could smell the river long before you could see it. But those dead trees also became the substrate for millions of invertebrates that brown trout loved. That made it the fishing paradise it is today.

One day I went up to band on the reservoir with Stu Garrett and my son, Ross, who was in high school at the time. (Ross has since retired from flying F-16s in the Air Force, while Garrett, with the helpful support of East Cascades Audubon Society, works on bringing the Greater sage-grouse back to better numbers these days. Garrett was once my doctor, and after he retired we still kept doing wildlife stuff together.)

Garrett would drop me off at a tree then pull the boat off to a safe distance while I banded the kids. Well, one tree was almost my undoing. I got settled on a branch just beneath the nest, reached up and got my hands on a baby—with its mom and dad complaining overhead—and had just begun to get it ready for banding when the limb I was sitting on broke.

I started down, breaking limbs as I hit them, heading for the water. I tossed the baby osprey toward Garrett and the boat and did all I could to slow my descent, but all to no avail. The big fear I had was I'd hit a submerged tree and kill myself. I steeled myself for the impact.

Thank goodness all I hit was water and bobbed to the surface to see Garrett, my son Ross and the boat right there. So I climbed in and sort of relaxed. But I was spooked, badly. We banded the poor little osprey who had gotten an early flying lesson, then I put on my pole climbers, went up to the nest, plopped it in and came back to the boat.

Garrett and my son could see I was in trouble and we began to talk out what was going on. We knew if I didn't get up another tree real quick, I'd never climb again.

Related The Acolytes of Mr. Anderson: Teachers, professors and even the host of Oregon Field Guide weigh in on Jim Anderson's influence on their lives

The Acolytes of Mr. Anderson
Teachers, professors and even the host of Oregon Field Guide weigh in on Jim Anderson's influence on their lives
By Nicole Vulcan
Local News

As we drifted closer and closer to a big snag—in the top of which was an active osprey nest—I kept looking up at it. As we pulled up alongside, Stu looked at me and said, "What do you think?"

We tied up to that beautiful old punkin, then I looked up at the nest, gave a shake, grabbed the trunk, stepped out of the boat, sunk my spurs into the tree and headed up to the top.

I can't tell you what I did to get the fear out of my mind, but when I got to the top I was back to my old self again. I banded the baby osprey and went back down to the boat.

One of those babies I banded set a distance record. It went all the way to Volcan, Costa Rica, that winter. I know that because I received an encounter note from the Banding Lab containing a photo of a man holding a dead osprey.

The man who killed the osprey sent the bands back to the banding lab with a note and Polaroid photo, thanking the lab for sending those delicious osprey to Costa Rica where they were—sadly—shot and eaten.