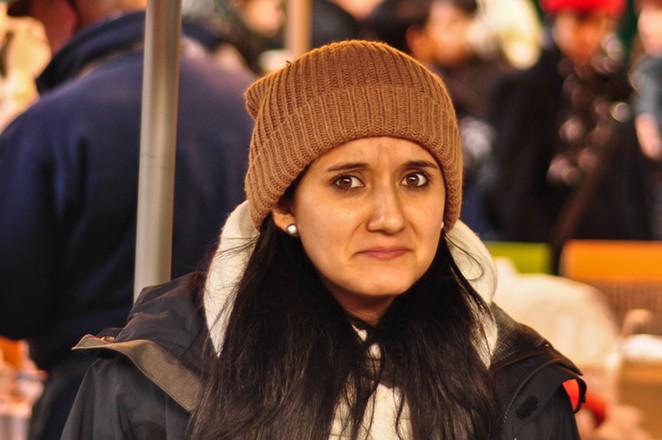 I'm a newly divorced woman trying some online dating sites. Because I read your column, I understand how men prioritize beauty. I'm an attractive woman, but I often photograph terribly, and I'm thinking of spending some money and having a professional photographer shoot some pix in a studio. Would this be a good investment? I feel like I'd have a better shot if I had really great photos.

Being somewhat vain, I fear the candid camera. In fact, I not only favor the posed photo but tend to stick (rather aggressively) to a single pose — the one that doesn't make people wonder whether I eat oats out of a burlap bag.

On online dating sites especially, appearance drives whom we choose or lose. Not surprisingly, marketing researcher Jonah Berger reports that "most online contexts," including dating sites, "are dominated by posed photos," as opposed to the candid kind — to the point where the main leisure activity in North America appears to be standing in a bathroom making duck lips for the camera.

Berger notes that people tend to assume that others will find them more likable and worth getting to know if they present "a curated, polished version of the self." Yet in his research, it was the candid pix that made people more interested in "being friends with or going on a date" with the person pictured. Those he surveyed also reported feeling "more connected" to those in the candid photos and liking these people more overall.

"Candid photos made photo targets seem more genuine," Berger explains. They "seem to provide a glimpse into what someone is truly like, an unvarnished perspective on how they look and behave when others aren't looking." However, there are times when candids are less advisable. For example, Berger found that employers on LinkedIn were more interested in hiring someone who used a posed photo. Sadly, it seems the candid "Here I am at 1 in the morning drinking my sixth glass of chardonnay" does not scream, "Hire MEEEEE!"

But getting back to online dating, let's temper Berger's findings with what we all know: The hotter you look the more replies you'll get on a dating site. So, because you're somebody who often photographs "terribly," your best bet is getting photos taken that appear to be candid. You do this by having a photographer or friend shoot you "in action" — in other words, appearing not to notice the big honking lens or the iPhone right in your face. Plan to shoot a ton of photos and at least a few will catch you looking babe-alicious. This should help you bridge the photogenic fairness gap — how there are those the candid camera loves and those it loves to make look like ringers for Winston Churchill.

Who Will Stop The Wane?

I'm happily married. My wife is beautiful. She used to put a lot of effort into her appearance, but she now wears sweats and T-shirts everywhere and she never wears makeup or does her hair. I felt really bad about this on our recent date night, when she just put her hair in a ponytail and wore a slouchy army jacket. I want her to keep making an effort to put herself together for me. How can I offer her constructive criticism without making her mad?

You come up behind a ragged, disheveled person standing on the corner and put a dollar in the Starbucks cup they're holding — and then you realize your error: "Oops! Hi, honey!"

I suspect the term "constructive criticism" was coined by someone who went through life without ever encountering another human being. As I explain in, "Good Manners for Nice People Who Sometimes Say F*ck," here in the real world, "criticizing people doesn't make them change; it makes them want to clobber you." That's because our ancient fight-or-flight system is a little one-note — juicing us to respond to a verbal attack as if it were an attack by some dude running at us with a bloody spear.

So, though it isn't unreasonable to want your wife to make an effort on date night, you should focus on what you do want to see rather than what you don't. For example: "Honey, you're so beautiful, and when it's date night, it would make me so happy if you did your hair and wore a dress. And I'll wear whatever you want." And to get her to make more of an effort day to day: "I love you so much, and I want to be sure we keep the romance alive." Make clear that you aren't expecting her to do the dishes in an evening dress and a tiara. You'd just be thrilled if, from time to time, the thigh-highs could be fishnets instead of, well, hip waders.