Every year, it happens. Men who love power tools end up effectively celibate for a year after buying their wife a vacuum cleaner for Valentine's Day. (Sad penis emoji.) 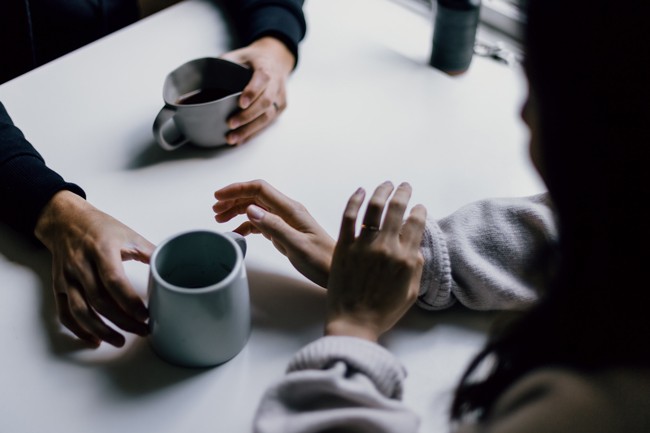 This gift-giving fail is a cousin of your friends' relationship advice-giving fails. Both stem from how bad we humans are at "perspective-taking." That's psychologists' term for a conscious effort to put ourselves in another person's shoes: trying to see the world from their perspective so we can figure out how they feel and what they need and want. Sounds like a pretty positive thing, right? And it is — in concept.

In practice, however, we tend to take the lazy way out, explains psychologist Nicholas Epley. Getting a fix on what would work for another person starts with a good long think about who they are — and takes lots more mental sloggery after that. So, we go with what we'd want, customize it ever-so-slightly for them, and then tell ourselves it's what they'd want.

For example, your friends' "Take the good with the bad," applied to your relationship, became "Take the miserable with the miserable." Chances are your friends aren't secret sociopaths, plotting to ruin your life. But there's (often subconscious) self-interest in advice-giving, like what I call "values-signaling": the showoffy confirmation of the awesomeness of one's principles by shoving them on others. And then there's the "helper's high," the buzz we get from do-gooding — or the mere belief our do-gooding's done good.

If you find a friend wise and think they fully understand your situation and share your values, it might be helpful to hear them out. However, your best bet is taking stock of your own values and then factoring in what's made you happy (or miserable) in past relationships, along with the likelihood your current relationship will give you enough "good" to make the "bad" worthwhile. In short, the world's best expert on what works for you is you — because you don't have to imagine yourself in your shoes; you just have to go find the one your hellshow of a girlfriend threw out the window.

My husband's a great guy: an excellent father and provider, dedicated to our relationship. However, if I text him something emotional, like if I'm having a hard time at work, his response doesn't seem genuine or heartfelt. Sometimes it'll be inappropriately robotic, like texting a sad emoji. How can I get him to be more emotionally engaged?

You did not marry Oprah. At best, you married Stedman.

Men are generally not as emotionally fluent as women, meaning not as able to identify and express their emotions. Say a woman puts her husband on the spot: "Well, come on...how do you feel about this?!" Assuming he loves her, he wants to tell her, but what comes out is "I...um...uhh...um..." (He figures he must have a feeling, but he's not sure what it is, where it is, or how to find it.)

This isn't to say men are broken or deficient. They're just different from women. Psychologist Simon Baron-Cohen explains that women tend to be feelings-focused "empathizers." From toddlerhood on, women specialize in identifying others' emotions and responding "with an appropriate emotion." This comes in handy for narrowing down why the baby's howling — instead of going with a wild guess: "I dunno...maybe he wants a beer?"

Men, in contrast, tend to be engineering-focused "systemizers," driven to figure out the workings of predictable, rules-driven "systems," like an AM/FM radio. "Predictable" because — for example — a radio remains a thing that receives and transmits electromagnetic waves; it doesn't announce in a teary huff, "It's that time of the month!" and spend six days acting like a repeating saw.

What's actually making you unhappy is not your husband but your expectation that he be both your husband and Carrie Bradshaw. Unfortunately, that's unlikely to happen. Bummer, yes, but consider how you describe your husband: a "great guy," an "excellent father and provider," dedicated to your relationship. So...you could continue going around resentful that, well, your man isn't much of a woman — or decide to shake your head and laugh at this wonderful man's lame efforts to "speak chick."

You might also consider that men's native language (when among men) is often grunting or just silently coexisting — which makes evolutionary sense. A guy gabbing it up on the hunt would've scared off the wild boar — and then pissed off the wife when he brought home the tree bark and tried to pass it off as bacon.