After ICE Protests, What's Next?

Processing the victories and failures of the protest against ICE

August 14, 2020
2 comments
Hundreds gathered in the parking lot behind the SpringHill Suites in Bend Wednesday night to prevent the removal of two Bend men who were inside two separate white buses.

Federal agents were eventually successful in taking the men off the buses by using pepper spray and other intimidation tactics. 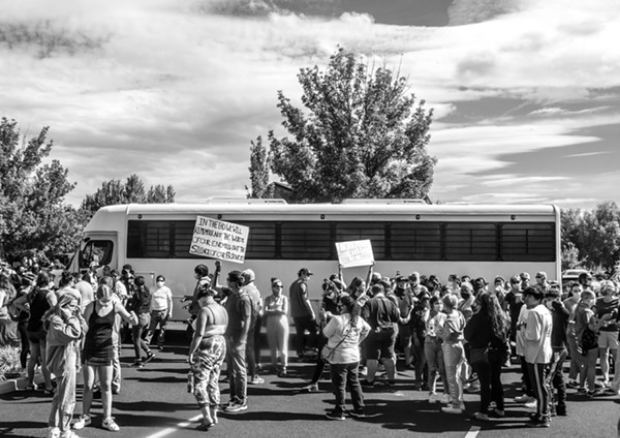 Janet Sarai Llerandi Gonzalez, the executive director of Mecca Bend, a nonprofit serving the local Latinx community, was one of the first to arrive on the scene, after a person in her community alerted her to the incident. She posted the situation to her Mecca Bend Facebook account. Word soon spread to other activist groups, including the Central Oregon PeaceKeepers, led by Luke Richter. Richter then found the buses and alerted his followers in a livestream. In the hours that followed, hundreds of people arrived to help block the buses.

Later in the evening, federal officers arrived and tried to disperse the crowd with tear gas and physical force, pushing people out of the way with their batons, to eventually reach the door of the bus and remove the detainees Marco Zeferino Rios and Josue Arturo Cruz Sanchez.

“In the grand scheme of things, [last night] was absolutely a success,” said Richter to Katie Ipock on her show Talk-Olymptic on Aug. 13.

Richter was one of the last to leave the scene at the end of the 12-hour demonstration. “As soon as everything was winding down, and I starting looking at my phone and seeing all the emails I got from NBC, The Washington Post, The New York Times, Russian television… so many different news sites. And tonight, seeing that Rachel Maddow had a full 10 minutes at the end of her show… But in that moment when I realized that they were gone, I felt like it was the biggest failure and felt like I did absolutely nothing to pull in that moment, and we just wasted a bunch of time. But now 24 hours later, I realized what happened. I’m not going to have a lot of free time now, because something really changed.”

Richter explained that throughout the course of the day, his team talked to eight different people including the person working the front desk at SpringHill Suites, the property owners of Crane Shed Commons, as well as Compass Commercial Real Estate to get permission to say on the property for the duration of the protest. The final verdict was that the crowd had permission to be there despite Police Chief Mike Krantz’s statement yesterday that the demonstrators were trespassing, Richter said.

U.S. Immigration and Customs Enforcement released this statement on Thursday:

“The law enforcement activity in Bend, Oregon is part of U.S. Immigration and Customs Enforcement’s mission to arrest criminal aliens presenting a danger to public safety and take them off the street. The two individuals arrested each had a history of criminal violent behavior.

“While ICE respects the rights of people to voice their opinion peacefully, that does not include illegally interfering with their federal law enforcement duties. ICE will take all necessary measures to ensure the safety of its officers and detainees, and will vigorously pursue prosecution against anyone who puts them in harm’s way.”

Both men had been charged with crimes in Deschutes County Circuit Court over the last few years. Now people in the community are asking questions about what prompted the sweep, and how ICE would have obtained information about the men’s immigration status.

For some Bend activists, many questions have been left unanswered as they continue to work to build on the momentum of the event.

Morgan Schmidt is a pastor for Bend First Presbyterian Church and the founder of Pandemic Partners-Bend, which has worked to coordinate volunteers to help others in need during the pandemic. She said she’s been working with youth and teenagers on social justice for 15 years and has been involved in de-escalation trainings throughout her life as an organizer. On Wednesday night, she took a leadership role, preparing the crowds gathered around the buses for the federal agents who would soon arrive on the scene from their outpost at the Bend National Guard Armory near Deschutes Brewery. During Schmidt’s appearance on Talk-Olyptic, she said the deportation protest was not “just a one day thing.”

“Now we actually get to the hard work,” Schmidt said. “If standing in front of the bus was all we had to do, then that was the easy part. It’s up to us to start asking some hard questions, about where our officers went when the feds showed up, and why it was a line of clergy and a line of [Central Oregon] Peacekeepers that were there willing to get beat up in order to keep our community safe. Where were the people who are sworn to protect us? We know there are issues with jurisdiction, but these are some fundamental questions about what kind of community we want to live in, and what kind of nation we want to live in.”

Mayor Sally Russell has been under fire for only appearing at the protest around 8pm with Krantz and declining to speak to the crowd. Instead, earlier in the day she tweeted “I’ve been informed that both been detained are violent criminals and have warrants out for their arrest. This is not a sweep for undocumented immigrants. Let’s please keep our community safe. Please leave peacefully.”

“[Sally Russell] I am public asking for your statement and apology to the families that have undergone this traumatic experience and to own your role in the perpetuating such despicable behavior on the part of an elected official,” wrote Gonzalez on Mecca Bend’s Instagram. Russell has not responded.

Meanwhile District Attorney John Hummel has received widespread praise from local social justice activists for his presence at the protest and his attempts to connect with federal officials to negotiate a solution.

On Wednesday he tweeted, “I’ve never been so disgusted by my government and so proud of my community.” The tweet and his actions at the protest prompted the retired ICE director and Fox News contributor Tom Homan to call for his resignation.

For Deb Auchery of The Cult of Tuck, she believes Wednesday’s protest served to expose people who live in Bend to issues of immigration and racial justice.

“As terrible as everything that happened yesterday was, I hope it opens some people‘s eyes,” Auchery said on Talk-Olyptic Thursday. “We’re not in a little, beautiful Bend bubble where everything is fun and fine and dandy. This has been happening all over the nation and everyone had been ignoring it until it happened to us. We need to care about people who don’t live in our community as well.”