After the Brawl at Pilot Butte

Up to 22 people may be charged in the wake of two competing demonstrations at Pilot Butte Neighborhood Park on Oct. 3. Deschutes County District Attorney John Hummel said he'll announce his decision on the charges at a press conference later this week.

The groups that clashed earlier this month gathered primarily in response to the first presidential debate Sept. 29, when moderator Chris Wallace asked President Donald Trump during the debate if he would be willing to denounce the Proud Boys and other white supremacist hate groups. Instead, Trump's message to the Proud Boys was to "stand back and stand by." 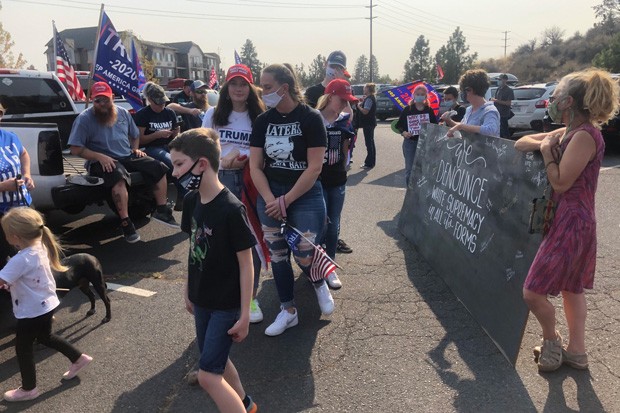 Kerstin Arias, co-founder of the Central Oregon Diversity Project, told the Source that Black Lives Matter activists were furious with the police for not arresting a man who brandished a gun, as well as other pro-Trump demonstrators who were drinking beer in the park before leaving in their trucks. A number of BLM protesters stood in front of a police car that was about to leave and yelled and swore at the police, demanding answers.

The next day, COPK and other groups planned a demonstration outside of the Bend Police station in order to file complaints against the police who were at Pilot Butte the day before. The crowd of around 100 people briefly blocked traffic on Hwy. 20 near the station. While they had many complaints, one accused Cpl. Jeff Frickey of choking a protester while trying to move her in the midst of a fight.

On Tuesday, Oct. 20, the Bend Police department released a statement announcing that it completed its investigation into the Pilot Butte event on Oct. 3 and the Bend Police station demonstration on Oct. 4. BPD investigators spent more than 400 hours reviewing cell footage and other forms of evidence, according to the release.

BPD said that 22 people should be charged with violations including interfering with police, theft, assault, disorderly conduct, unlawful use of a stun gun, mace and a weapon, and participating in a riot.

While it is traditional BPD practice to send out press releases to the public to announce alleged crimes, suggesting criminal charges through a statement is new.

"During my six years in office I've never seen the police department inform the public as to what charges they think I should file," Hummel told the Source. "And I don't think it ever happened before my tenure in office."