After the Green Rush | The Leaflet | Bend | The Source Weekly - Bend, Oregon

After the Green Rush

It's been three years since the 2018 Farm Bill legalized hemp production on all agricultural land in the United States after nearly 50 years of prohibition. A verifiable green rush followed, with farmers hoping to cash in on the versatile new crop. Over 11,000 acres of hemp were grown in Oregon in 2018, and by 2019 it jumped to over 63,000 acres.

Since the high in 2019 the industry shriveled in the oversaturated market. In 2020 Oregon grew less than half of what it did the year before, and so far in 2021 the state produced the least amount of hemp since legalization, at about 7,500 acres this year thus far. This has spelled trouble for Central Oregon, where the climate is well-suited for the drought- and frost-resistant crop. 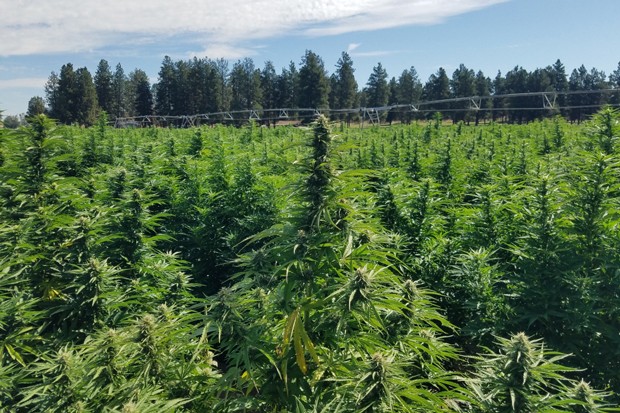 "They say that for the CBD market you need about 20,000 acres to raise enough hemp to cover the CBD demands for the nation," said Matt Cyrus, president of the Deschutes County Farm Bureau and the Central Oregon Hemp Association. "In 2019 they raised about 500,000 acres nationwide. So, we raised a 25-year supply in one year."

The oversupply affected prices by an order of magnitude. In 2017 hemp was grown by a select few who opted into statewide pilot programs, and prices for a pound of biomass — what remains of the plant after flowers are cultivated — could sell for much as $100. Now it sells between $1-2 a pound. There is also competition among international markets; the U.S. grows the third-most hemp in the world behind China and Canada. A Hemp Benchmarks survey showed that over half of hemp farmers were either cutting back or keeping the same amount of hemp production in 2021, and that over 20% didn't plant in 2020.

"It's a very expensive crop to raise, you're looking at thousands of dollars per acre investment, and when you don't get a recovery, there were a lot of farmers that literally bet the farm," Cyrus said.

The most profitable market for hemp has historically been in medicinal CBD oils used in distillates, lotions and smokable flower. With prices down, farmers are exploring more traditional hemp uses like fiber and hemp seed oil, a dietary supplement without CBD or THC.

"Under typical irrigation, you've got plants that will grow 12-14 feet tall, you cut the tops off for seed, typically for oils, and then you've got the stocks that can then be processed for fiber, going into everything from paper to clothing, plastics, building materials, hempcrete, hemp fiber board," Cyrus said. "But we don't have the infrastructure to properly manufacture it in most of the U.S."

Investment in fiber infrastructure is growing, but most hemp sourced for clothing comes from China, which has more experience growing hemp specifically for fiber. While hemp predominantly goes toward the CBD market in the US, 75% of China's hemp production went toward fiber, according to the U.S. Department of Agriculture's Foreign Agriculture Service.

Though the market is in a lull, Cyrus expects the market to stabilize once there is infrastructure to support it.

"It's a pendulum that, kind of like with every market, whether it's real estate boom and bust, or, every commodity, corn, wheat oil, kind of whatever, the pendulum is in the downside, and I expect the pendulum will swing back up," Cyrus said. "It won't come back as high as the highs, and it won't drop back down below the lows again. But it'll move back and forth until it'll create somewhat of a balance."

Hemp's honeymoon phase is over, but farmers who grow it learned valuable lessons on how to raise the crop.

"It's kind of like the California gold rush. Everybody jumped in, everybody was going to make their fortune, and quite frankly, had we known the first year what we know now we'd have done much better," Cyrus said. "There was no history and no background, there was no research, prices were high, but yields were really low and it was high-intensive crop loss simply because nobody knew how to raise the plant outdoors."