Registration for Kids Inc. for the 2019-20 school year opened May 20 at 5:30 am. By noon, spots were completely full at 12 of the 14 schools offering Kids Inc.'s after school programs. According to a Facebook comment by Bend Park and Recreation District, five school sites were full within five minutes. Those who couldn't sign up in time were left to the waitlist. 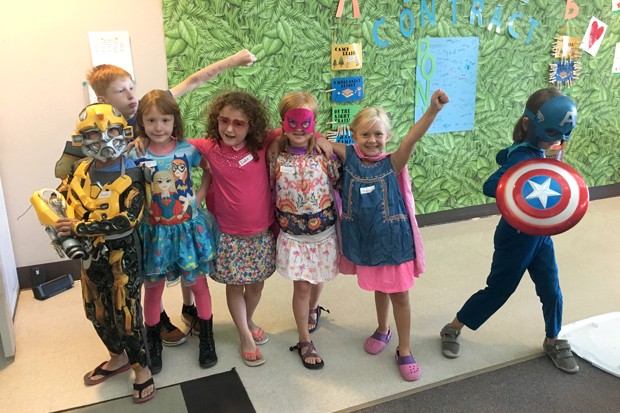 In October, the Bend-La Pine school district announced it would be changing school hours for the 2019-20 school year. Elementary school hours will run from 8 am to 2:30 pm, (Wednesdays 8 am to 1 pm), and middle and high school from 8:45 am to 3:45 pm (Wednesdays from 8:45 am to 2 pm)—a change aimed at making school times more optimal for adolescent learners. According to research, the adolescent brain functions better with later school start times.

With that change, families are more anxious than ever to work around busy schedules and find satisfactory plans for younger children who need care after school hours.

"It's stressful. I'm not sure what I'll need next year for my schedule. So, there might be no options left," says Jackie Vance, a parent in the Juniper Elementary School community. "I'm hoping they'll [BPRD] use the waitlist to realize they'll need more spots."

Juniper was one of the schools that was filled within the first day of Kids Inc. registration. Vance feels sorry for parents who are on a set schedule, or families new to the area with young children—because for them, there might not be a lot of other options.

"It gets stressful for parents. It forces them to make poor decisions for their child or can cause conflict at work," said Vance, who currently finds her family on the waiting list. "With the schedule change, it's different this year than in the past. The past couple of years wasn't such a stress as it feels right now."

Parents on the waiting list, new to the area or without a plan can also look to the Boys and Girls Club of Bend.

"We begin our registration on August 1," says BGCB's new Executive Director Juliana Williams. "We've been getting a lot more phone calls this year than normal. Especially since the day Parks and Rec registration was starting to fill. We're going to be open earlier each day [to accommodate the schedule change] and we do anticipate an overall increase."

BGCB's afterschool programs can accommodate up to 300 kids a day. That's a mark Williams says they haven't really hit before, but she also wouldn't be surprised if this was the year – stating they expect to see a rise similar to that of Kids Inc. For those parents who might be interested in the BGCB programs, registration must be done in person.

It's clear BPRD and BGCB are having to make changes to fit the new school district's schedules –but it's something each knew would be a factor into the upcoming year.

"We are modifying the structure of the program, since we will have more kids and be working out of two or more spaces. The schedule change also means that we will have kids for up to an hour longer," says BPRD's Recreation Services Director Matt Mercer. "Together this will require increased staffing levels, more activity options and different organization and logistic plans. With the time change, we will not be offering a before-school program, as the vast majority of families no longer need this with the earlier school start time. We are taking interest lists for before-school programs in the event that there are enough families at any school to make it feasible to provide the morning option."

According to BPRD, as of May 22 there were nearly 1,100 kids signed up for Kids Inc. for next school year. Compared to the 690 at this time last year, that's more than a 50 percent increase in enrolled children. In anticipation for the need of a greater capacity, BPRD did add quite a few spaces to the program. Last year, there were approximately 800 available spots at 13 schools. This year there are approximately 1,200 spots at 14 schools—so the increase has actually resulted in having fewer people on the waitlist than last year.

"The waitlist is approximately 300 people as of May 22," BPRD Communications Director Julie Brown said in an email. "This is a little less than last year at this time. We've already moved more than 140 people from the waitlist in the first 48 hours since registration opened."

As Mercer mentioned, one of the other issues the program faces is the amount of staffing available to cover the increased attendance—which BPRD is getting prepared for. Mercer says they are currently hiring a much larger staff. Kids Inc. currently operates with between 60 and 70 part-time employees. With the additional capacity, BPRD will look to employ 90 or more.

For those who might find themselves on the waitlist, BPRD wants families to know it doesn't hurt to stick it out, and that with the help of the school district they are working toward future solutions.

"We would encourage people to remain on the waitlist while also pursuing other options. The number of people on the waitlist this year is actually lower than it was last year at this time due to the increased capacity offered," says Mercer. "We are continuously monitoring enrollment and attendance and moving people off the waitlists whenever possible, including throughout the school year. We will also continue to work closely with the school district to identify options to increase capacity."