Midtown Yacht Club, Bend's newest food cart lot and taproom, officially opened its doors in early July. The lot is home to several brand spankin' new carts, including Cowboy Pasta and TOTS, as well as some long-standing local favorites including Barrio and Alley Dogz. Rounding out the six cart line-up are Lively Up Yourself and Thai 2 Go. 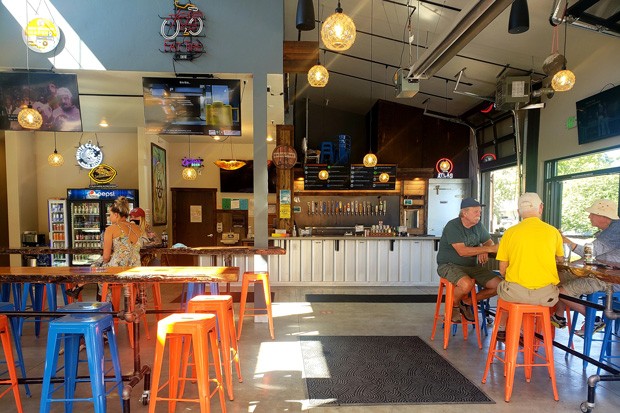 Cowboy Pasta serves up generous pasta-filled bread bowls and homemade clam chowder (when available). The meat is locally sourced, and everything on the menu is made fresh. "We believe in serving people cowboy-sized portions," said Vicki Mays, who co-owns the cart with her husband, Dan Wolfe.

Lively Up Yourself offers vegan comfort food, from vegan ribs with a side of (cheese-less) mac and cheese to a toasty vegan BLT. TOTS offers a decadent take on the beloved bar snack. The cart was initially inspired by happy hours and Cajun tots at another local haunt. Golf ball-sized tater tots are doused in everything from homemade buffalo sauce to freshly-shaved parmesan cheese and truffle oil. Thai 2 Go serves up traditional Thai food in a ridiculously efficient manner: my Tom Kha was ready to enjoy in under a minute (literally).

Alley Dogz is known for its smothered, 100% beef hotdogs, large enough to feed at least four moderately hungry humans. Oh, and did we mention the fully loaded chicken nuggets? Because that's a thing. Finally, there's Barrio. It's difficult to beat three Latin-inspired craft tacos for $10. Barrios latest addition to the fleet joins a downtown brick and mortar and another food cart that found its home at On Tap.

Midtown Yacht Club has lots of outdoor seating, but most of the parking is on the street. The indoor taproom is also spacious, with a wide selection of beers on tap as well as massive coolers stocked with adult and non-alcoholic beverages. Midtown Yacht Club is open daily from 11am-10pm, and yes – doggos are welcome, too.