In April of 2019 patrons of Arnold Irrigation District received a postcard in the mail informing them of a plan to pipe the district's 13.2-mile canal and inviting them to comment on the project. The meeting passed with little buzz, and AID patron Mark Elling said that was the last patrons heard about it until June 8 when the district released a draft environmental assessment—essentially a roadmap for the project.

Many AID patrons organized and attempted to steer the project in a different direction after seeing that the draft EA didn't factor in property damage or loss of property value in piping costs, the loss of a water source for wild animals and trees and, perhaps most broadly, the loss of the flume, an over 80-year-old open half pipe that diverts AID's irrigation water from the Deschutes.

"They said that they received over 400 separate public comments about the issue, which is very high compared to what other irrigation districts have received in my understanding," Elling, a member of the patron group opposed to piping, said. "They did not specify which issues were driving that amount of opposition, but I would imagine the flume is a big part of it."

The draft EA claims 70-80% of trees survive piping in similar projects if actively irrigated by the landowner, and that piping is only one factor in losing groundwater. tweet this

The comments are not available to the public and the Source wasn't able to verify the number of comments in favor or opposition to the project, as AID didn't respond to a request for comment.

The preferred solution among the patron group is canal lining, in which geotextile liner and shotcrete are poured over earthen canals. Lined canals lose about 10% of water to seepage, whereas unlined canals in Central Oregon soil can lose up to 50% according to the Deschutes River Conservancy. The draft EA says lining was considered, along with both piping and leaving the canal as is, and found piping was the cheapest option in the long term.

"Canal lining was eliminated, and it was one of the terms but it was eliminated from further study," said Brett Golden, director of modernization at Farmers Conservation Alliance, the agency that prepared the study. "It's the capital costs, the replacement cost and the maintenance costs."

The EA estimates the 100-year cost of lining would be $80,864,000, compared to the $42,759,000 price tag for piping which Golden says requires little to no maintenance. AID's patrons who oppose the plan dispute this assessment. Elling compiled material and installation estimates and predicts a cost of $28.6 million to line the entire canal without safety ladders and fencing along the canals—costs FCA factored into its estimates.

"I spent a couple of weeks just doing research with different contractors that either sell the material or install the material and putting together all the quotes," Elling said. "Basically, they in their documents, blew up the costs 200% to 800%, higher than market to make that look not feasible. So, I think that the other methods that are out there are less expensive than a pipe."

Patrons also worry about the impact to the ecosystem, arguing that the canal supports wildlife. Over the past 100 years animals relied on the canal for water, and the seepage from the canals supports trees in the area and filled wells. Though lining would also decrease seepage, nearby trees still benefit from the water.

"When you have a ditch that these trees and the wildlife have depended on for 110 years, it is part of the ecosystem," said Chuck Fisher, an AID patron. "All these trees will die, all of the deer, all of the elk, all of the everything that needs water will inevitably have to go to the river."

The draft EA claims 70-80% of trees survive piping in similar projects if actively irrigated by the landowner, and that piping is only one factor in losing groundwater. 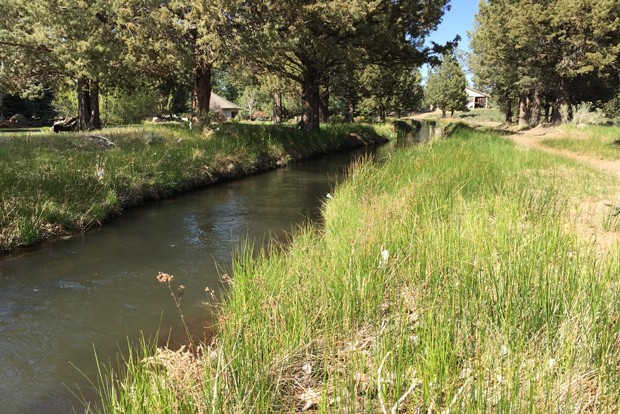 "The studies that do exist show that canal piping contribute[s] a relatively small amount to water level declines as compared to withdrawals or climate, the climate being the biggest influence," Golden said.

Where seepage isn't an issue is at the flume, which stretches a mile off the Deschutes just before Lava Island Falls. Visible from the Deschutes River Trail and winding through backyards in Deschutes River Woods, the draft EA proposes the flume be replaced with a pipe. The proposed pipe would be buried, but the height would remain about the same as the flume and a service road would be placed on top.

"You can fix the flume without doing this massive pipe covered in dirt," Fisher said. "You could literally take and put half pipes in there. If you want to leave it open and put it on the same thing that's through there."

Golden said FCA will respond to comments about the flume after further research.

"We're still looking back to make sure that we have that answer correct," he said.

The EA says the proposal will modernize 149 of the district's 646 patrons' lines, saving an estimated 32.5 cubic square feet per second of water from seepage loss during the irrigation season. The excess water will be given to North Unit Irrigation District, which holds the most junior water rights in the Deschutes Basin and has more commercial agricultural production than other Central Oregon districts.

AID patrons opposed to the project can get behind its goal of supporting NUID, but disagree with the means to achieve them.

"That's where the real farmers are at and they're getting screwed," Fisher, the AID patron, said. "But why don't we solve those problems, shotcrete, put the coffer dams in and you've already saved enough water that we're getting through this without putting a $40 million boondoggle through everybody's property."