Airing of Grievances: An Invitation | The Source Weekly - Bend, Oregon

Airing of Grievances: An Invitation

Play along with the Source's Festivus-style grouse fest!

December 18, 2018
comment
If you're a fan of '90s TV, there's a good chance you've heard of Festivus—the non-secular, invented holiday made popular by the sitcom, "Seinfeld."

In homage to that time-honored tradition, we invite you, readers, to participate in your own Airing of Grievances, Central Oregon edition. 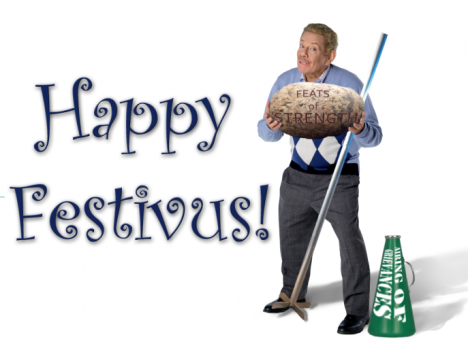 Is there a facet of living in Central Oregon that makes you a bit batty?
Is there a thing you encounter daily that you wish you could change?

It might not actually change that annoying thing, but we invite you to write your grievance in the comments below, for possible publication in the Source Weekly's Year in Review issue, on stands Dec. 27.

For those not familiar with Festivus, a little history. According to the Festivus entry on Wikipedia (which is fundraising in earnest right now, to keep the crowd-sourced information it provides flowing), the holiday was created by "author and editor Daniel O'Keefe, the father of TV writer Dan O'Keefe, and was celebrated by his family as early as 1966," in an effort to move away from the consumerism of the holiday season. The younger O'Keefe was a writer on "Seinfeld" and brought the concept to the show.

Elements of Festivus, celebrated on Dec. 23, include an airing of grievances, feats of strength, a Festivus pole, observance of Festivus miracles and a Festivus dinner. Yes, this is a thing—and not just for the TV show.

We'll be a tad behind schedule when we air your grievances in the Dec. 27 issue, but we hope you'll still play along...