All About Brut IPA

The SF export is craft beer's and hot new style 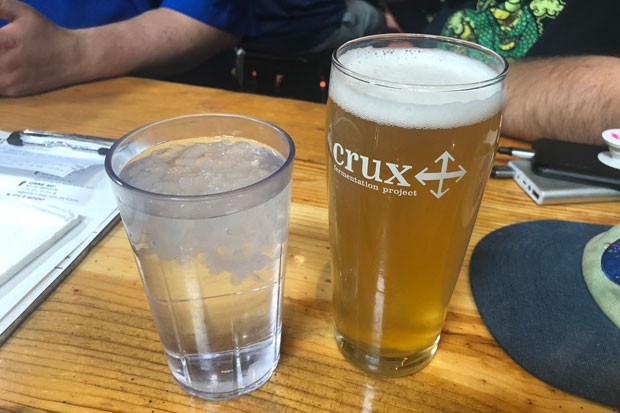 During a sweaty August afternoon around here, a lot of people's thoughts quickly turn to knocking off to the local brewery and grabbing an IPA. Which one, though? The now-standard Northwest style? Something a little more sessionable? Or one of those ever-present New England-style IPAs, a genre which has exploded so massively that there are more entries in the 2018 Great American Beer Festival's "Juicy or Hazy IPA" category than for regular IPA?

If all those piney hops and fruit-juice bombs are tiring out locals' palates a bit, it may be worth seeking out a so-called "brut IPA," a brand-new genre of pale ale rapidly expanding across the U.S. over the summer.

The secret to brut IPA, a term coined by brewmaster Kim Sturdavant of San Francisco's Social Kitchen & Brewery, lies in a little enzyme called amylase. Amylase is often added to robust, high-alcohol beers like stout in order to boost attenuation—in other words, to encourage the yeast to eat up more sugar and reduce the resultant beer's sweetness. High attenuation means very little sugar survives the brewing process, making for beer with a thinner body and extra dryness without dulling the ABV count.

Sturdavant debuted the Hop Champagne Extra Brut IPA at Social Kitchen last November, the result of his taking the amylase usually reserved for his triple IPA and adding it to a standard-strength ale. It quickly got people talking in California, and from there it's spread across the entire country, amylase being an extremely common chemical to find around a brewery.

So far this summer, Bend has seen brut IPAs from Sunriver, Riverbend, Boneyard (whose "DryPA" was a collaboration with Yakima's Single Hill Brewing) and most recently Crux, whose Gated Commünity is on tap right now. All of these are super-dry, very aromatic, and highly effervescent beers. Despite being called an IPA, there's almost no bitterness, with most of the hops added after the boil for aroma purposes. As a summer beer, it's both novel and extremely refreshing—the perfect new style for riding out the high temperatures until fall.