All The Right Moves | Kids In Action | Bend | The Source Weekly - Bend, Oregon

All The Right Moves 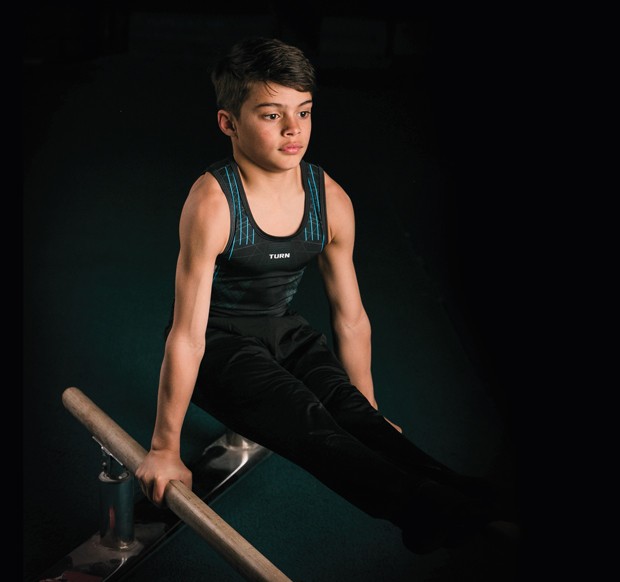 Being upside down runs in the Ali family. Janae Ali went to college on a gymnastics scholarship, and turns out, the flipping genes got passed down to her kids. Her oldest child, Rohan, who is 10 years old, made it clear from an early age that gymnastics came naturally to him.

"At a year and a half he was climbing park benches and doing a jump turn or jumping off the bed," Janae said. "He was a very springy, spinny kid."

When Rohan was just 4, Ali's parents enrolled him in his first gymnastics class. Six years later, Ali still loves it. He practices almost every day, for a total of 15-20 hours a week at OOA Gymnastics in Bend. He and his siblings are all homeschooled (one of his brothers is also a gymnast), which allows their family more flexibility and gives Ali and his brother more time for practice.

Ali is a multi-time state gymnastics champion. He has won the all-around title and/or event titles at every level he has competed. He also has a regional title where he also placed 2nd and 1st in all events for 2018.

"It took a little convincing, but I wanted to keep doing gymnastics," Ali said. "I love that I get to compete, and I spend four days a week at the gym with my friends. I really like all the twisting and flipping."

At each meet, there are six events in which Ali can compete— rings, pommel horse, vault, floor, parallel bars and high bar. He is a level 7 compulsary gymnast right now, which requires that he compete in every event, with a specific routine that he and all the other gymnasts at that level perform for each event.

"My favorite events are the rings, because I'm really good at those, and the pommel horse," Ali said. "The high bar doesn't come as naturally to me, so I'm not as good at that."

"Sometimes I don't want to try a skill because I'm afraid I might get hurt, but if I know I can do it I just go for it." —Janae Ali tweet this

Something else Ali likes is seeing his friends from other cities at competitions. Because the number of boys competing is relatively small, Ali gets to know his competitors quite well, and even considers one of them among his best friends.

"Usually either I get first or Austin gets first or we tie," Ali said. Even though he likes placing well at meets, he does wish there were more competitors rather than the same people every time. Ali considers himself pretty driven, and knows that if a new competitor arrived on the scene it would mean a challenge for him.

While gymnastics isn't Ali's only interest, he knows he's not done with it yet. One of his goals is to get a state championship at every level, which means he has three more state championships to work towards. So far, he has won an all-around title or an event title at levels 4, 5 and 6, and he is in the process of finishing up level 7.

"I have 63 medals—more than my mom!" Ali exclaimed. "I have them on a hanger in my room and I see them every time I walk past. Sometimes they make me think about what I have accomplished, like the particular event or if I did something in the meet to win one."

Medals aren't his only motivation though— Ali also likes knowing he has mastered a skill and can do it as well as he possibly can.

"The coaches will push him to learn a new skill, and once he knows he can do something, he's unstoppable," his mom said.

Ali has been lucky so far in this high-injury sport, but making sure he continues to stay injury free is always on his mind, especially while he's practicing.

"Sometimes I don't want to try a skill because I'm afraid I might get hurt, but if I know I can do it I just go for it," he said.

When he needs a little motivation from his coaches, they usually give him free time to do his favorite activity — flipping and jumping on a trampoline or into the foam-filled pit at the gym.

Even though Ali has his eyes on the prize when it comes to gymnastics, that doesn't stop him from pursuing his other hobbies. He taught himself to play piano on an iPad and has progressed to playing on an actual piano. He also likes to play soccer with his friends and will probably take up that sport after gymnastics. Many of his skills learned from gymnastics will translate well, but if he ever gives up gymnastics there is one thing he will have a hard time finding in other sports.

"My favorite thing about gymnastics is that my feet are hardly on the ground and I get to be upside down," Ali said. "It changes your perspective."