Photographer Christian Heeb's new collection, "American Dreamscapes," explores the beautiful, darker side of America during the 1950s. Heeb shot many of the photos around Bend and Central Oregon. The Source Weekly had a chat with the book's creator about the work. 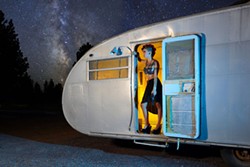 Source Weekly: What were you looking for when choosing locations?

Christian Heeb: Basically, I was looking for some vintage Americana. The places I shot were kind of run-down, old America, so it's stuff that's not too obvious. They're places that you usually just pass, that you don't really look at. Like Pilot Butte Drive In which has been open forever and it's not a flashy, shiny diner, but if you light it differently it just comes to life. I love shooting in Central Oregon because I have so many local people that helped me. It was really awesome what I could do.

SW: There's an eerie, subdued violence to these photos. Was that your goal?

CH: I try to kind of bring out things that show America's character, at least how I see it. It's like the underbelly of the American Dream. It's not all glorious diners and '50s music from that time. There's a lot of history in the American culture that's very violent. I think that's in the persona of the nation. I was born in Europe, so I look at it differently. I try to mix the beauty of America with this dark underbelly that doesn't always come out, that's not always seen. 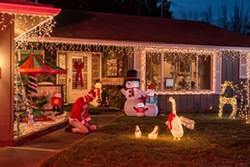 SW: A lot of the characters in your photos feel connected. Is there an overarching narrative to this series?

CH: Not really, but I guess it's all combined because it's my vision of America. I just want people to look at them and make their own stories. Everybody looks at these shots and they all come up with all these things that could've happened or things they project onto the shots. I think I want to just leave it at that because I don't really have one. I don't even really want to tell people what to see in these shots.