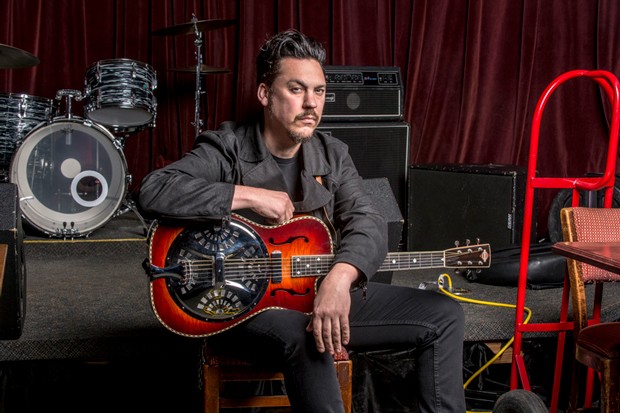 Country singer Jesse Dayton has worked with a lot of incredible musicians and filmmakers. He recorded with Johnny Cash and Waylon Jennings. He co-wrote songs with Rob Zombie and acted in several of his films. He played guitar on tour for punk legends, X. Now, he's got a full plate — touring, recording, acting and supporting political candidates including Beto O'Rourke.

"I'd never met Waylon before and he'd seen me on a TV show," Dayton says. "He'd cut his hand cooking that night and he called me the next morning and said, 'Hey hoss, want to come play guitar for me?' I'm kind of freaking out. I knock on the door and Johnny Cash opens it. 'Are you going to stand there with your mouth open?' he said to me. It was great. I learned all kinds of lessons from them."

Shortly after that, Rolling Stone wrote about Dayton. Jennings told him that if he believed the good press, he'd have to believe the bad press, too. From that, Dayton gathered that Jennings didn't pay attention to press—likely as a way of protecting himself.

"They were really cool. Cash was like a spiritual being, he just had this aura around him. Waylon was like the Hells Angels and would steal your girlfriend," Dayton recalls.

Years later, Dayton joined forces with Rob Zombie, who taught him how to direct music videos. He would send Zombie rough cuts and Zombie would respond with notes like "darken the lighting here," or "this scene needs more blood" or "you can't hear the screaming loud enough." Zombie would also give Dayton themes and tell him to go write a song.

"People have no idea. That guy is operating on a different level," Dayton says of Zombie. "I do a lot of stuff, but he's unbelievable. Working with Rob was a huge education for me. We made three movies together and did two soundtracks together and then I ended up directing my own film with a bunch of people I'd worked with in Rob's movies."

"All the old guys thought Waylon was too rock and roll. I'm kinda like that, too. I'm combining a hybrid of styles and it's all this different stuff — R&B, country, punk rock, all of this stuff into an American hybrid." —Jesse Dayton tweet this

Before teaming up with Zombie, Dayton recalls his career being at a low point. When he first debuted, he'd had number-one Americana records and played for the President of the United States.

"Six or seven years later, it was meh," Dayton says. "I was still respected and was playing shows, but the movie stuff kind of reinvented my career because those records got huge cult followings."

After finding that success in film and soundtracks, Dayton recorded a new album, "The Revealer." Since its release, Dayton hasn't stopped touring—though he did find time to record and release his most recent album, "The Outsider."

"This is the first time I'd ever done that before," Dayton says. "We'd always gone into the studio, taking time off. For 'The Outsider,' we recorded three songs in Denver, two in L.A., four tracks in Nashville and a few tracks in Austin. It was kinda cool. Those different places definitely added to the vibe of those songs. I really liked it because I didn't want to stop touring because we were on a roll. We had such good momentum."

Dayton has big plans on the horizon, including a new film and an album of cover songs. He also just wrapped up playing guitar on the album put out by Duff McKagan of Guns N' Roses fame. While his work spans genres and he can boast working with many well-known people, his music stands on its own. Dayton proves to be anything but your typical country artist, and he prefers it that way.

"Those of us who like NPR, who like The New York Times, we want smart country music," Dayton says. "That's why we all like the guys like Steve Earle. I did a benefit with him and it feels good to be on this side.

"I have had the great fortune of playing with some legends," he adds. "They were bringing what they do in a new way. All the old guys thought Waylon was too rock and roll. I'm kinda like that, too. I'm combining a hybrid of styles and it's all this different stuff — R&B, country, punk rock, all of this stuff into an American hybrid."