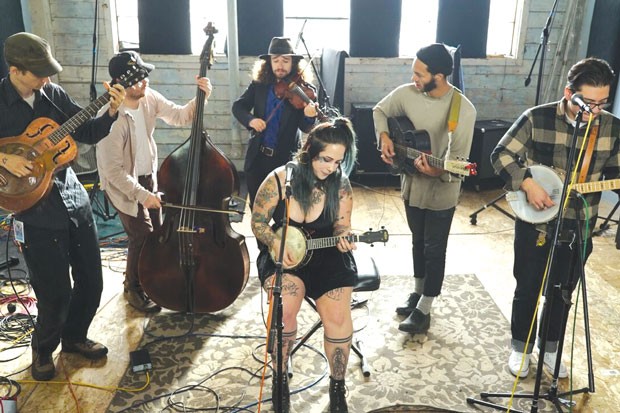 The Bridge City Sinners had just finished breakfast in Garberville, Calif., and were jamming some tunes when I called for our phone interview. Two of the dudes had taken their shirts off for the occasion—or so they told me—as a throwback to a previous interview they'd done. When you interview a band with five members over the phone, it can be tough to decipher who's saying what, but we laughed a lot and made the best of it.

The Bridge City Sinners got their start busking on the streets of Portland. Lead singer Libby Lux and upright bass player Scott Michaud got together—without rehearsing—and would sing and perform for passersby, developing a large catalogue of songs passed through the busking community. Sadly, in 2012, a mutual friend of Lux and Michaud's, and lead singer of folk-punk band Profane Sass, lost his life. The band came together in 2016 in homage to their friend.

"I'm pretty good at playing for people who don't care," Lux laughs when I ask about how busking helped prepare the band for touring. "It definitely helped me with volume. You demand everyone's attention in the room when singing without a microphone. I had no idea how to use a microphone. It's a whole other instrument."

The band members each had a funny anecdote when I asked what was the weirdest tip they ever received while busking. One band member got a burrito. Another got a job application. On more than one occasion, people exposed themselves.

"We were busking in Portland and all of a sudden a pizza guy showed up," Lux says. "Someone ordered us a pizza and asked the guy to drop it off on the corner with us."

Aside from being the kind of people you just want to jam with, the Bridge City Sinners create incredible music that blends folk, punk, swing and old-time melodies. Many of the band members got their start in punk rock, but all proudly state they love all types of music.

"I always wanted to be in a punk rock band," Lux says. "I just picked up an instrument and even though I wanted it to come out edgy, it came out soft and sweet. I tried to make it as edgy as I could. It's easy to go from angsty punk rock to country music.

"Song inspiration is just Scott yelling at me that we need new songs," Lux jokes. "I think I write more than anything alone in the car or in the shower. I'll think of some kind of catchphrase or powerful sentence and try to rhythm it."

With a history as a busking band, they do a lot of covers, but plan to record an album of all originals. Lux would also love to tour in places she's never been before, including Texas, Louisiana and the East Coast. And, of course, she wants to go to Disney World.

"It's funny, we don't really hang out except for music," Lux says. "Even if we get together and have a BBQ, there's music. I went to Scott's house and had a board game night and it ended up being us playing music. You've got to do what you love. We got together to have fun and play music."