A tribute to Pat Clark, artist, educator and founder of some of Bend's artistic institutions

I remember quite clearly the first time I had a conversation with Pat Clark. I was hanging an exhibition of student work from an arts residency I had completed with almost 2,000 middle school students in Central Oregon and Portland. It had been a daunting task, and a lonely one— traveling to a new school each week. But here it was in its completion, now hanging on the wall of Clark's printmaking studio and gallery, Atelier 6000. Clark was thrilled the work was hanging there. She treated it like it was the work of master artists. She marveled at the students' uses of language and imagery. When I left that conversation, I felt prouder and more accomplished than I ever remember feeling at any time in my professional arts teaching career.

Pat Clark was that for a lot of artists in Central Oregon, and she was especially that for the arts community in Bend. When Pat moved to Bend after a celebrated career as chair of the art department at California State University, Long Beach, her retirement took root in the form of opening Atelier 6000, a printmaking and book arts studio, where she continued her daily practice of arts making and advocacy. 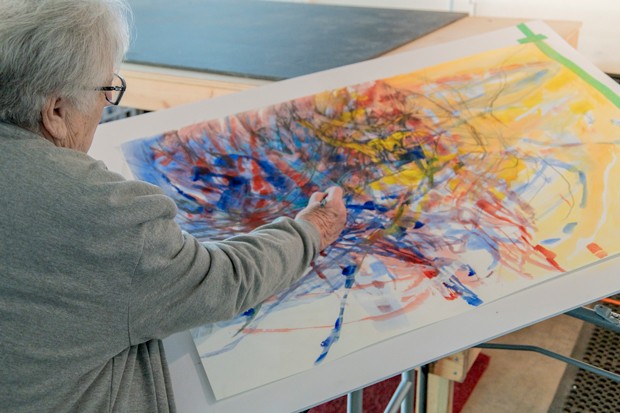 She welcomed artists from all over to join her in her studio. She was a joyful teacher and collaborator who often showed us that the act of sharing art was just as wonderful as the act of making art.

"Many teachers will give you knowledge or information. Pat gave me curiosity and that was the best gift," recalls Jeanette Small, a local artist and past A6 studio member. Many artists will echo this sentiment—that Clark was deeply curious. She effortlessly used this spirited curiosity to connect her fellow artists in a multitude of ways.

Locals will see this in her final collaboration with the community before her passing last week. "Rooted," is now on display at The High Desert Museum. In the last few months of her life, Clark invited artists into her studio to observe and draw a giant root that had been pulled from her front yard years earlier. The culmination is over 70 pieces of art by approximately 50 artists that all reflect the root — a seemingly simple effort that results in an expansive and all-encompassing reflection of the beauty and simplicity that is in front of us every day. 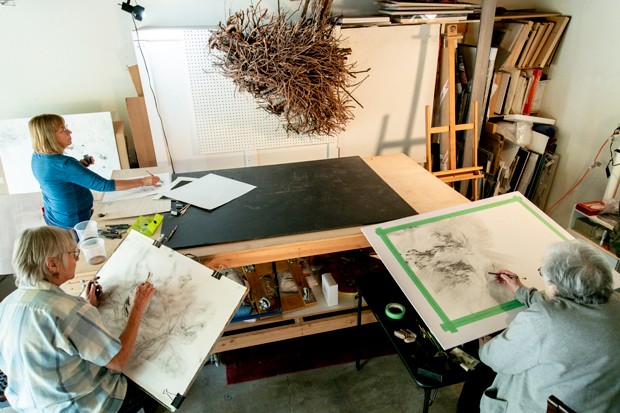 Clark referred to herself as a "visionary recorder of facts," and referred to what she did as making marks. "By sharing my mark, I am making what I am," she once stated. She endlessly encouraged others to make their own marks as well and celebrated in whatever way those marks appeared.

In the video accompanying the exhibition, Clark says in an interview: "You really have to be rooted in something to make it meaningful to us—to others. In root systems, you can see how they pushed and pulled and strived to be—to still be growing. It's amazing. How the roots systems talk to each other and take care of each other."

This is that part of Clark that I will miss the most—the one who didn't chit-chat, the one who spoke straight from her heart into yours in every moment you shared with her. The one who showed us again and again, whether through her own art, through her arts advocacy or through her deep mentoring of so many in the arts community—that this world was an exciting and wondrous place and you, as a part of it, are that, too.