At Blue Mountain Wildlife, saving raptors is the name of the game

I have a friend, Lynn Tompkins, who, with her husband, Bob, operate a wildlife facility that does wildlife rehab work near Pendleton. At the moment she and her irreplaceable Volunteers (Capitalized because they are so faithful and hard-working), headed by Michele Canon, are currently handling over 30 orphaned barn owls that have come to her attention as hay-haulers removed the bales from the barns, where the birds were nesting.

Canon and her team have taken over an old farm, where they feed the baby owls the hundreds of mice they consume as they grow up (and you can just imagine what that cost is). When they reach their flying age, they leave on their own (known as hacking) to take up residence in southeast Washington and northeast Oregon. But before they leave, the team bands every one of them with a USGS leg band.

Every day, all day, the phone is ringing about this or that wild animal that needs help. Baby wildlife that can't be put back with their parents in the wild end up at the Blue Mountain Wildlife facility. Baby owls, robins, opossum, hawks, you name it. Lynn Tompkins, with the help of another volunteer, Samantha Castoldi, and her crew, will often have several wildlife of varied species to care for.

In addition to the young and infirm, they also get eagles and hawks suffering from lead poisoning, both from ingesting it in the prey they ate, or pounded into their body by some person with a firearm that has to kill something — or has a misguided attitude about raptors and shoots every one he or she can.

Yes, at one time people paid a bounty for dead eagles in Alaska. Fisherman were so upset by the number of bald eagles eating "their" salmon they thought killing the eagles would provide more salmon for them to sell.

The Bald Eagle Act, enacted in 1940 and amended several times since, prohibits anyone, without a permit issued by the Secretary of the Interior, from "taking" (killing) bald or golden eagles, including having in their possession parts, nests or eggs. But unfortunately, law enforcement seemed to be looking the other way, and no one really paid much attention to the Act, here or anywhere else.

When I rolled into Bend on my Harley in '51 I went into the eagle protection business pretty quickly, because I found federal trappers poisoning eagles (along with hawks, owls, woodpeckers, skunks, badgers and everything else that ate meat) in the 1,080 poison sets supposedly placed all over Central Oregon to "control" coyotes. The Bald Eagle Protection Act meant nothing to them.

I had the greatest opportunity to help stop the killing of raptors when I accidentally met and began working with State Police Wildlife Officer, Avon Mayfield, stationed in Bend. He called me one day out of the blue and asked if I would climb into an old ponderosa pine near the Fryrear landfill of today and retrieve two dead baby golden eagles someone had shot.

It took Officer Mayfield almost a year to apprehend the culprits, but he got 'em and stood right alongside them when they appeared before the county judge to be sentenced. From that day until I left Bend to go to work with OMSI as their staff naturalist, Mayfield and I put the fear of God in hawk, owl and eagle shooters.

When I'd discover someone shooting raptors, I'd call Mayfield on his home phone and his answer was always the same, "Wait until I get my uniform on..."

Right now, however, Blue Mountain Wildlife is plagued with a preponderance of gun-shot raptors. Most of the time the victims have to be euthanized because the injuries are so severe. When this happens in the spring that means nestlings also die.

Here's what Lynn said about the gun-shot bird X-ray:

"Jim, this bald eagle was euthanized on admission Jan 10, 2020. The right wrist was destroyed by a projectile. I've included the radiograph of the left wrist for comparison. This eagle (also) had a blood lead level of 42.7 micrograms/deciliter. 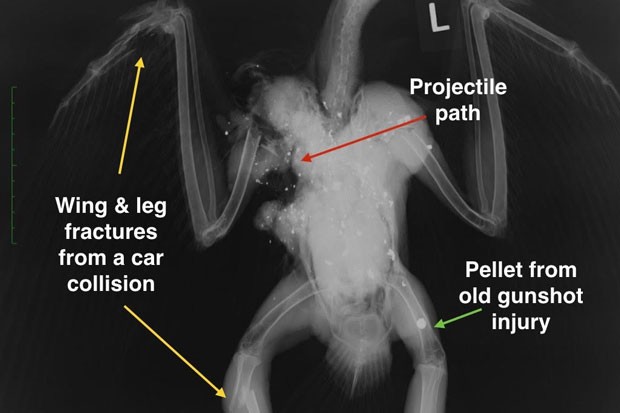 "It had lead poisoning from scavenging an animal that had been shot with lead ammunition. We test approximately 200 birds per year for lead using a LeadCare II machine. Its original purpose was to screen children in the doctor's office for lead poisoning. It is portable, and California condor researchers use it to monitor lead levels in free flying condors. That is how I found out about it.

"This is the eagle that Richie Bare, of USFWS has offered a $2,500 reward for information leading to the arrest of the person who shot the eagle."

What Lynn has shared with us is just the tip of the iceberg; that eagle was not only ingesting lead, but it was also shot with lead ammunition — it didn't stand a chance. Unfortunately, 50 years of Earth Days still hasn't sufficiently impacted the wildlife shooters.

If you would like to donate to Blue Mountain to help support this work that Lynn and her Volunteers do, you can contact her at: bluemountainwildlife.org.