If you don't want black widows, let some other spiders live among you

One the things I think I'm going to miss when I go out among the stars is the, "Oh, by the way," meetings of people in the post office, grocery stores, hardware stores, thrift shops and other places in town. There isn't a day that goes by that I don't get that wonderful greeting, and then something new in our beautiful world of nature comes to my attention. 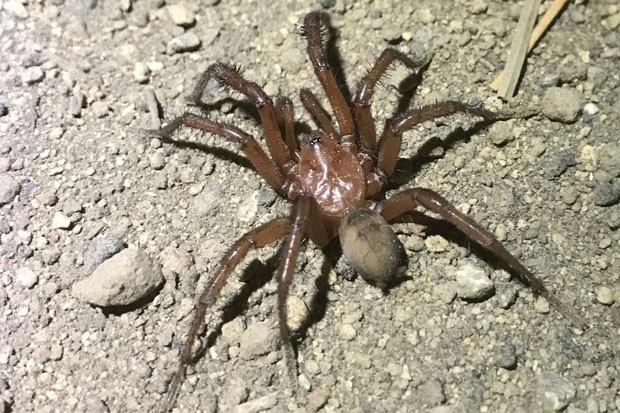 It happens without guile, and always with a smile—even sightings of spiders. I was picking up a prescription at Bi-Mart the other day, and as it is when it's one I've never taken before, a pharmacist has to introduce it to me. It's usually Andy who has that responsibility, but this time it was Sara.

She used her most professional tone to tell me about those little pills, how many I should take per day and things to watch for. I thanked her for her time, and then, with that same professional air, she whipped out her cell phone and said, "Oh, by the way, have you ever seen one of these?"

I looked down at the phone and there was a large, beautiful spider gazing back at me! "Whoa!" I exclaimed, "that looks for all the world like a tarantula. Have you been to Arizona?"

Sara knew she had me. "No," she replied. "My husband and I saw this in our backyard!"

I asked her if I could take a closer look and she graciously handed me her nifty cell phone. As I looked at the specimen closely I could see the spinnerets on the end of the abdomen, which led me toward identifying it as a tarantula. But then I saw the details of the spider; the formidable hardness of the its abdomen (which is seldom seen). It was a female folding door spider—its scientific name a mouthful to pronounce: Antrodiaetus pacificus.

No one has gotten around to giving this striking arthropod any other name, so folding door spider it is. However, I can almost hear the names some people would shout if the spider suddenly appeared in front of them while pulling weeds in the garden on a warm, summer evening.

Here's the way Merrill Peterson, author of "Pacific Northwest Insects," describes them: "These big spiders have thick, spiny legs and shiny, fairly flat carapaces (that's the cover of the middle section of the spider's body). Each has a soft abdomen with one to a few small, hardened patches on the upper side.

If you put up with the web and clean up just the most annoying stray silk, these spiders will keep your home safe from the infamous black widow that also inhabits dwellings. tweet this

"The eyes of folding door spiders are tightly clustered on their faces, near the midline. The ground-dwelling spiders live in burrows, the entrance to which is often concealed with a closable turret. Males wander around in larger areas in search of mates, but females seldom stray from their burrows."

For the record, Mecicobothridae, a smaller lookalike to the folding door group, contains nine species of small spiders that build sheet-webs on the soil. In one species, Mecicobothrium thorelli, chemical and/or tactile signals on the female's silk trigger the male's courtship display, a dance he does on the web that shouts, "Here I am!"

Now we get to a couple of other spiders that we have running around in our homes year-round: the common giant house spider and barn funnel weaver. Both are sheet web (with funnel) weavers and both are very beneficial to homeowners.

If you put up with the web and clean up just the most annoying stray silk, these spiders will keep your home safe from the infamous black widow that also inhabits dwellings, and at the same time control the moths that leave their caterpillars in your clothing in the closet.

If you have a crawlspace under your home, you have black widows living with you. They love the dark, and they love to eat anything that crawls around under the house, from insects to mice. The silk of widow webs is the strongest substance known on earth. If a mouse stumbles into it, it's done for. The widow will immediately wrap it up to keep it from escaping, then inject its powerful venom and spend a week sucking the hapless victim dry.

I once had an arachnologist (spider scientist) tell me that all it would take is black widow silk the diameter of a pencil to replace all those immense steel cables in the San Francisco Bay Bridge.

So, here's my unsolicited advice: Cut this story from the paper, install it in a plastic folder and place it with your gardening tools and equipment.

Next spring, when you start up your garden, you'll see the clipping and then remember my story when you accidentally tear the turret off a folding door spider's happy home and the spider comes jumping out, scaring you half to death. Many thanks... jimnaturalist@gmail.com.