An Extraordinary Event of Summer

Tortoiseshells and other butterflies are welcome visitors in Central Oregon

Oh, boy, are we having fun! Right now, during these warm first weeks of July, the California tortoiseshell butterfly, one of the more dashing of the nymphalids, is popping out by the hundreds of thousands—if not millions —in the foothills of the Cascades, known as the Skyline Forest. 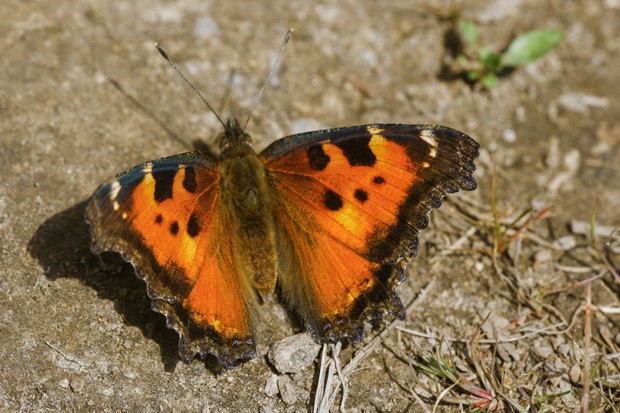 This beautiful butterfly has been flitting around this part of Oregon for the last couple of years in such numbers that many who noticed them wondered where they came from and why so many were here.

Actually, we haven't figured out why they burst out in mass numbers in some years. I have a hunch it's one of the intricate mechanisms nature has given them that keeps their numbers going and protects them from extinction. The last time these beauties reproduced in such numbers around here was back in the mid-'80s. That was the first time I had ever seen such a phenomenon, and, to me, it was astounding.

I can't remember dates as well as I'd like, but I can remember seeing them crossing Highway 97 south of Bend in such numbers they were splattered all over windshields and the front of cars and trucks. That year, I believe the California highway department had to install a special radiator steam-cleaning apparatus south of Klamath Falls to keep the 18-wheelers going, the butterflies were so thick.

You'd think they live a boom-and-bust lifestyle, but from my perspective, it seems to be boom and boom, one after another. As long as the Ceanothus is as healthy as it is, the tortoiseshells seem to just keep going.

Like many butterflies, such as the monarch, whose one "host plant" is milkweed, the tortoiseshells also have only one host plant, the various lilac species of Ceanothus, which we know here as "Snowbrush." And this past winter and wet spring was really good to our Ceanothus, which was fortunate for the tortoiseshells; there were lots of green leaves for the caterpillars to munch on, and they ate so much of it they actually defoliated the plants in some areas.

There are other members of their biome that work on tortoiseshells as a food source. Sure, robins go after them when they emerge (but I don't think they taste that good) and ravens will pluck them from the stems as they're developing. Wasp parasites sneak in among the caterpillars just before they enter the chrysalid stage, laying their eggs on the caterpillars. Then the eggs hatch and the larvae enter the potential butterfly as it's undergoing metamorphosis. The wasps eat the innards of the developing butterfly, then go through their own change and emerge as adults.

That was one of the big shocks my wife, Sue, and I received during the tortoiseshell explosion of the '80s. I was watching for a butterfly to emerge from the chrysalides we brought home to document, but some of the casings didn't split open and release butterflies. Tiny golden wasps emerged instead.

The antifreeze in their "blood" helps tortoiseshells survive winter. The colder it gets, the better the antifreeze protects their innards. Those of us who heat our homes with wood know where they spend winter, as I see them hiding in my woodpile. To help them survive winter, I carefully move them into my barn and place them in out-of-the-way hideaways where I'd often find another tortoiseshell near the same spot.

The overwinter habit is why we sometimes see tortoiseshells flying on warm February days. You may wonder what they're eating in spring, and if you follow them, you may see them up in the fir trees in your yard, nectaring on the needle secretions.

The tortoiseshell can be recognized by the top of its wings, which are orange with black markings. The browns and grays of the underside resemble a dead leaf when the wings are closed. But to me I think it resembles the carapace of some tortoises I've seen.

Those orange and black wings sometimes confuse people and they call them monarchs, but there's no relationship with those troubled butterflies, other than similar coloring.

And don't get the idea these beautiful butterflies are limited to California and Oregon. Yes, the majority may be in California, but a California tortoiseshell's habitat range stretches south from British Columbia to Mexico and east from California to Wyoming.

When California tortoiseshells experience a population explosion in the summer, and the weather is right, some have been known to travel east to Vermont, New York and Pennsylvania. On one rare occasion, a few turned up in Maine.

By the time you read these tidbits about this remarkable butterfly, though, the Skyline Forest bunch will already have completed metamorphosis and emerged as adults to fly off and begin exploring new places to make themselves at home—like your garden.