An Ode to the Unsung Torta | Chow | Bend | The Source Weekly - Bend, Oregon

An Ode to the Unsung Torta

Tacos get a lot of attention. But tortas deserve love, too.

There is no doubt that the taco—the glorious, portable, munchable taco—is one of the best culinary developments in history. But look further down the menu at many Mexican food spots—beyond the enchiladas (yum) and burritos (always an easy choice) and tamales (delicious) and you'll often find the tortas, those combos of meat and beans and avocado and lettuce and other stuff, hiding in plain sight under a mound of bolillo or telera bread. 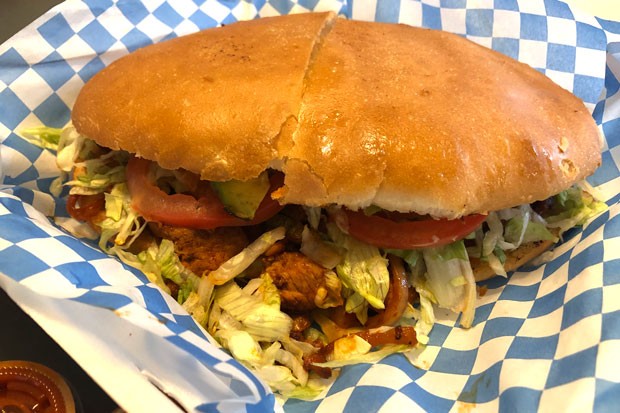 "I think they are one of the most endearing Mexican staple foods for both locals and foreigners alike," Pedro Reyes, author of the book, "¡Acá las tortas!" a book highlighting the venerable torta, told Vice.

The torta is thought to have its roots in colonization, when the French occupation of Mexico brought French bread-making skills to the country. Napoleon's occupation didn't last, but the bread did. For this torta lover, getting the bread just right is the key to a magnificent torta. Toasting or grilling is key to avoiding sogginess in this giant sandwich.

In this era of pandemic, I personally have one more reason to choose the torta over the taco. Sitting at a taqueria, I often find myself going back for "just one more" taco. When picking up takeout to eat later at home, there's no "just one more." Choose the giant torta and you're likely to have more food than you can eat in one sitting.

Check out one (or all) of these torta options when you're out and about in Central Oregon.

Newly opened this year, Don Gabino's occupies the former Esta Bien! location on Third Street. Not wanting to venture out, I headed over to BendTakeout.com and ordered the machaca torta, which included shredded beef, green peppers and onions, along with the usual complement of beans and guac and lettuce. I have come to decide that, like tacos, there are very few tortas I don't agree with. While this one didn't pass the "crispy toasted bread" test, I ate half of it in short order, and saved the rest for the next day. It held up well and served as a delicious breakfast.

Located along the main drag of Fourth Street in downtown Madras, it's hard to miss La Posada's brightly painted yellow and red building, a former drive-in burger joint that now serves up a variety of Mexican food. The highlight of La Posada's torta is definitely the meat; perfectly cooked, with crispy edges, and fresh—no surprise, since Madras is surrounded by ranch country. La Posada also grills its bread on the flat-top, achieving that delicious toastiness. Grilled jalapeños from the taqueria's salsa bar make this a real winner—though in the COVID-19 era, sadly, those salsa bars have yet to get set back up. 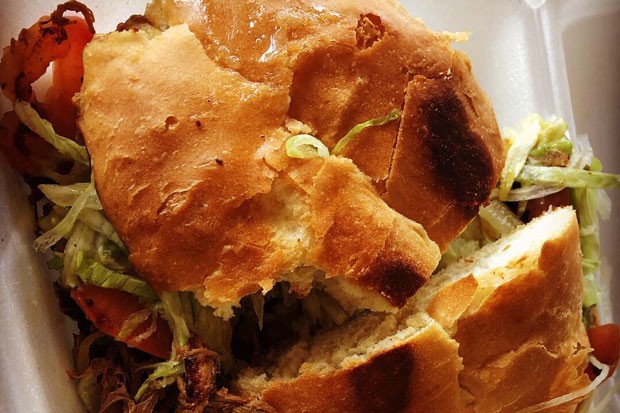 Rather than mayo, tortas are typically smeared with refried beans and guacamole, ideally on both sides. At Taqueria El Nava, located at Bend's 9th Street Village, the guac is swapped for fresh slices of avocado. Being a sucker for carne asada, I decided to try something else for a change. Sweet with a hint of barbecue flavor, the al pastor torta is piled high with lettuce and toasted lightly to achieve a hint of crispiness. 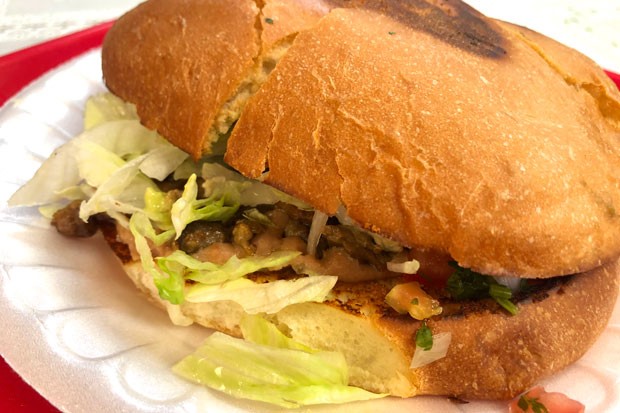 I am still dreaming about the meat at Lucy's. I was keen to try the torta milanesa—referring to the thin-cut, breaded steak or chicken cutlet that's a popular torta option in Mexico—but they were out that day... so I crawled back to my go-to asada. My favorite carne asada is crispy at times, while also juicy, but the asada at Lucy's was slightly different—almost brisket-like, and delicious. Biting into the bread, with its dark circle on the top, indicating it had been pressed onto the flat-top, elicited a loud crunchy sound. So good. The asada inside was exquisite. While Lucy's already does a brisk business, being located right on Sixth Street in Redmond, it may be my new favorite reason to make the trip to Redmond.