Biking to help fight cancer with the Oregon Cancer Bike Out

It's no secret: Central Oregonians love to mountain bike. Putting those tires on a good piece of trail can be euphoric for people.

On Oct. 5, bike lovers will get the chance to hit some of the best trails in the area and even ride for a good cause: fighting cancer. 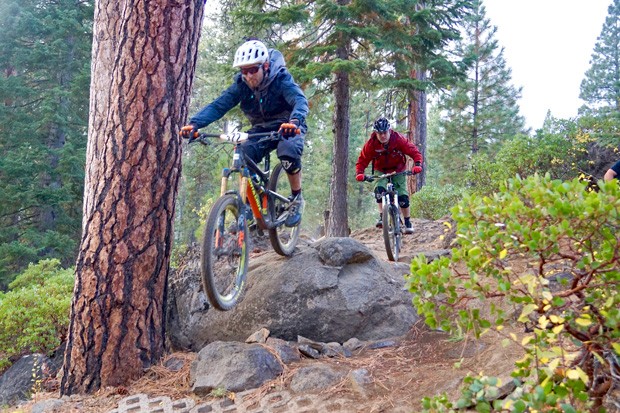 "When you're affected—either you're the person dealing with cancer, or a close friend or relative; they deal with it and you see it. You get kind of upset and don't know what to do about it. Like what do you do with all that? You're pissed off and you want to give back and do something about it," says Todd Wells, Oregon Cancer Bike Out events founder. "And if you're into mountain biking some of the leash can be taken by just participating. You show up, ride, talk to some people and share stories."

This year marks the seventh annual Bike Out in Bend. Each year there are two events; one held in Ashland and the other in Bend. The Bend event starts at Wanoga Sno-Park, featuring a full day of trail riding and a post-ride dinner to follow. Shuttles will be on site to help riders get where they need to be.

Wells has volunteered with the Central Oregon Trail Alliance since 2007, and once all of the original trails were finished at Wanoga Sno-Park in 2009, he found himself spending a lot of time out there working on the trails—eventually becoming the adopter of the popular Funner trail. Inviting his friends out to help work on the trails together was actually the initial inspiration for the OCBO—and it only grew from there.

"I'm just blown away how people feel about it and why they're coming and the impact it's making on people," Wells tells the Source Weekly. "Mountain bikers typically—like this is our time of year. The trails have the best conditions right now."

“There’s two things we say a lot—we call it ‘serious fun.’ Because we’re having fun, but we’re serious about it.—Todd Wells tweet this

Wells chose to partner with the Northwest Cancer Resource Fund as a way to keep the funds raised local. Some beneficiaries for the Bike Out in this area include St. Charles Cancer Center, Tour Des Chutes and Candlelighters for Children with Cancer. Wells also gives some of the funds to the Central Oregon Trail Alliance and Oregon Adaptive Sports. Over the past six years, Wells says he's raised around $25,000 between the Bend and Ashland events which started in 2014.

"There's two things we say a lot—we call it 'serious fun.' Because we're having fun, but we're serious about it. Sometimes there's tear-jerking moments. We're at dinner talking and some of the stories are pretty heavy. I mean people die from cancer," says Wells. "The second thing we say is that 'what's raised here, stays here.' If I'm going to raise money out of Bend, I'm not going to send the money to Portland or Louisville, Kentucky, or wherever. So, I make sure the money goes to local cancer foundations."

The dinner portion of the event is held at Elk Lake Resort, where riders can come after a long day of riding and connect in a different way. For those who aren't big mountain bikers or who are unable to bike at the time but want to help, they can sign up for a dinner-only registration and still join in on the weekend's fundraising.

"I'm humbled and I'm thankful," says Wells about each time a new Bike Out event is held, and he sees both new and familiar faces. "It motivates me to do it again."