Another Type of Smoke Signal

An ode to a sleeping volcano

The title of this piece was inspired from the Oct. 24 edition of the Source Weekly, specifically Josh Jardine's column, "Memories of the Volcano." But the volcano I remember is one familiar to us all, Bachelor Butte, or as the downhill skiers know it, Mt. Bachelor. 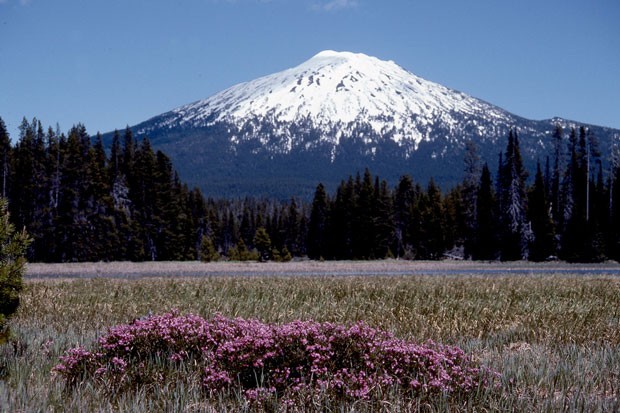 That's not just a pile of rocks with a ski run on it; that's a real living and breathing, sleeping volcano. One of these fine days—who knows when—that beautiful little volcano is going to wake up and show us all what a volcano can do.

In respect for my dear, old pal and mentor of the geology of Oregon—and writing—Phil Brogan, I'm going back to the name I knew the mountain by in the '50s: Bachelor Butte.

Brogan was born March 23, 1896 and went out among the stars on May 30, 1983. He spent his early years on his dad's ranch near Antelope. He spent 44 years as a reporter, writer and editor for The Bulletin, writing for The Oregonian, and earning numerous awards for his work.

With his graduate degree in geology from the University of Oregon, he was also a well-known historian, paleontologist, meteorologist and astronomer. During his writing career he authored "East of the Cascades" in 1964—a wonderful book on the history and geology of Central Oregon.

He had the patience of Job with me and my constant questions about the volcanic products I discovered while blasting the ash overburden on Bill Miller's pumice fields west of Bend. He also had the patience to put me in The Bulletin as a cub reporter. He also introduced me to Camp Hancock in 1955, which I used to work myself to the position of staff naturalist at the Oregon Museum of Science and Industry.

Anyone who’s hiked around Bachelor Butte knows it’s just sleeping; fumaroles that melt snow in hot spots on the north side testify there’s a lot of volcanic heat stored under the ash, scoria and lava smeared on and under the old volcano. tweet this

So, in that light, I'll parrot what Brogan said to me after we had hiked the trail from the base of Bachelor Butte to the summit and back the last time: "Rest assured, Jimmy, one of these fine days this old volcano is going to wake up, and when it does, a great many people in Central Oregon will wake up with it..."

Anyone who's hiked around Bachelor Butte knows it's just sleeping; fumaroles that melt snow in hot spots on the north side testify there's a lot of volcanic heat stored under the ash, scoria and lava smeared on and under the old volcano.

And old it is—at least 6,600 years, by most volcanologists' work. If you take a hike up the glaciated trench on the north side you'll see all the forces that flowed into the volcanic creation of the other larger Cascade volcanoes, but in miniature.

And South Sister, Bachelor Butte's neighbor to the northwest, is also sleeping. In 2000, after a European space agency's satellite imagery detected a tectonic uplift and resulting hot spot under South Sister, the U.S. Geological Survey established several monitoring stations throughout Central Oregon and the Cascades.

For the moment, the hot spot is stalled a few miles beneath the surface, but it's still there...waiting. There have been several earthquakes off the Oregon Coast recently, all about 6 miles under the surface, reminding us there is an enormous chunk of Earth's surface moving under Oregon. Like other Cascade volcanoes, Bachelor Butte and South Sister were built up by magma chambers produced by the subduction of the Juan de Fuca tectonic plate under our feet.

Some geologists say the contact zone sliding under our part of North America is hung up — not moving as smoothly as it should—and tension is building. When that tension is released, geologists say it will result in "The Big One," and the enormous energy let loose all at once will generate ultra-powerful earthquakes.

I spent a lot of time discussing the geology of our area with my dear pal, Larry Chitwood — geologist for the U.S. Forest Service—which centered around The Big One and that hot spot under the west side of South Sister. Larry monitored gases coming to the surface from the hot spot and discovered they were the result of a basalt source deep under the earth.

"Just think," he said, "we can grab up our camp chairs, take the lift up to the summit of Bachelor and sit and watch pahoehoe lava going by on its way to Bend."

And another thought about The Big One. May I suggest you forget about crawling under the table to avoid injury? I can recall images of those poor crushed children under their desks when an earthquake hit Mexico a few years back. If you're sure the ceiling will stay in place, maybe the space under the table will be safe also—but for me, if I'm stuck inside I'm going to lie down as close as I can to the back of a sofa...and pray.