The Poolside Leper Society album is a thrilling listen that allows you to scream, and then breathe

There have been plenty of moments over the last year when screaming would have been a totally appropriate reaction to life—which is why the full-length debut from Poolside Leper Society might come in handy, more now than ever.

Released in February and titled "Anxiety," the album features eight tracks recorded at the Firing Room in Bend during 2020, along with four other cuts recorded by the band themselves from 2017 to 2018. Throughout, listeners get a little taste of a variety of styles from Poolside as the band cascades through screaming moments of metal, punk and garage rock, and even a few softer periods of catchy alternative hooks. 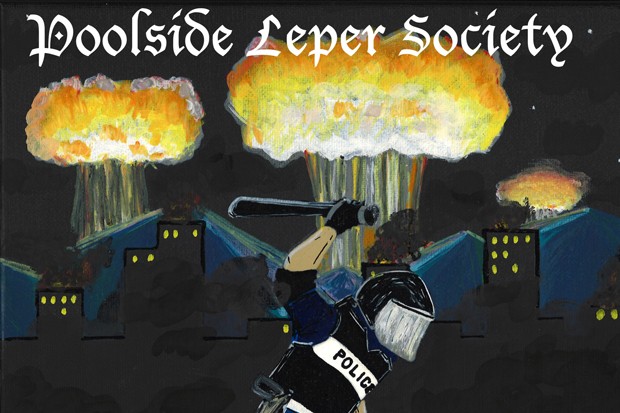 Choosing the title "Anxiety" is not only relatable due to the world feeling trapped inside a bubble for much of the past year, but the music also reflects those feelings and provides the listener with some needed release. This wasn't the band's intention at first, members said, but it ended up fitting perfectly.

"Originally we discussed naming the album 'Feed The Habit,' but with a last-minute change we settled on 'Anxiety.' It's really a challenge to get all of us to agree on anything. This, however, was one of those rare moments," said lead singer Everett Dahl. "'Anxiety' felt appropriate with what's going on in the world. From COVID to civil rights and police brutality to finally putting your foot down with your wack-job-homophobic-racist Trump-supporting family members. Tensions are running high. So short answer long, I've suffered from panic attacks and anxiety for as long as I can remember. Writing and playing music is one of my coping mechanisms—so you could say all our stuff is fueled by 'anxiety,' yes."

"Anxiety" also marks an important milestone for the band, as it's the first full-length project Poolside Leper Society has released. With the lineup going through some tweaks over the years, along with kids and life in general, it can be hard to find the time to carve something like this out—but finally the time was right.

"It feels really good. We've been a band, not this lineup, at least me and Reede [Nichols, drummer] have been in this band for five years. It was always like, 'Yes, let's do it!' 'We will do it!' So we made the decision to do it at the end of 2019, and then a bunch of stuff happened [coronavirus pandemic] again where it got postponed," says Dahl. "It's a relief to have it done and to get it out there."

One song on the album that stands out is the closing number, "Brutal Authority," a song that questions and challenges methods of law enforcement and those in power and how they wield it.

"I've been playing in punk rock bands since I was a little kid. Police brutality is something I've heard about and read about and seen in the news for most of my life, as far as I can remember," Dahl recalls.

Another track that deserves love is "Werewolves of Lundgren" for its fun and upbeat personality. Dahl tells me that he actually got the first lines from his, at the time, five-year-old daughter who was singing a song of her own: "I don't know and, I don't care!" Other than his love for "Werewolves of Lundgren," Dahl is especially excited about "Feed The Habit" and "Party Line Pride," two last-minute additions to the album.

There are so many things one could take from the album—and Dahl is open to that experience, and wants you to decide for yourself.

"I really like the idea of writing a song and I know what it means to me. I know I listen to songs from artists I enjoy and when I hear those it makes me feel something or takes me some place. Then I hear later on in an interview or something what the song was actually about, and I was way off. I like to let it mean whatever it means to them."

Listen to "Anxiety" on Bandcamp, Apple Music or Spotify.