Are Essential Oils Safe for Pets?

Essential oils have been used for centuries to help people with physical and emotional ailments. The uplifting scent of citrus may bring to mind sunny summer days even in the darkest months of winter. As many pet owners have grown to love and depend on the healing effects of essential oils for themselves, many have wondered if the oils would also benefit their pets.

Over the last decade, interest in oils and other herbal remedies surged as Americans sought out alternatives to pharmaceuticals and costly visits to the hospital. Revenue from essential oils alone spiked 40% between 2014 and 2018 in the U.S., according to The Washington Post, and it's expected to reach $5 billion in the next three years. 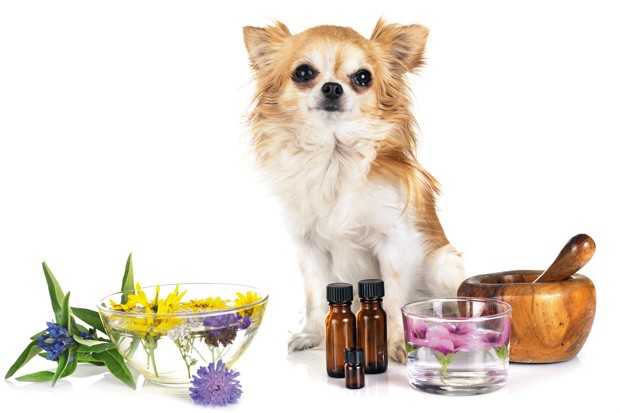 As big-name, multi-level marketing essential oil companies like DoTerra and Young Living raked in revenues, they poured some of these profits toward scientific research, much focused on essential oils' healing benefits for people. A few holistic veterinarians have carved out a name for themselves by formulating and diluting their own essential oils blends for pets.

In Central Oregon, while some conventional veterinarians and doctors may warn against using essential oils with pets, local vets who market their services as "holistic" often use oils alongside other remedies like herbs and acupuncture.

Dr. Leslie McIntyre of Sage Veterinary Alternatives began her practice in Bend in the 1990s. Today, she's fully booked with a waiting list. She told Central Oregon Pets that essential oils may be especially helpful for a pet's behavioral conditions like aggression, anxiety and fear.

For dogs, having a diffuser on all day would be really overwhelming. It would be like us having a hamburger under our noses all day long.—Dr. Leslie McIntyre tweet this

She works directly with the company AnímálEO—created by a holistic veterinarian who once sold oils for Young Living, but eventually became an expert in formulating oil blends for pets.

"I work with AnímálEO because of the fact that there can be some level of toxicity with oils for animals," McIntyre said. "We have to be a lot more cautious with pets... mainly because as people, we don't normally lick our skin! But animals groom themselves with their tongues all the time. Cats are especially sensitive to oils."

McIntyre said 99% of oils should not be ingested by animals. For people who like to have a diffuser running in their homes, she recommends only having it on for an hour at a time when pets are nearby.

"For dogs, having a diffuser on all day would be really overwhelming," McIntryre said. "It would be like us having a hamburger under our noses all day long. At first, it's great, but then it would be too much. Dogs have olfactory senses that are so much keener than ours. If you are using a diffuser therapeutically to help calm them down, you only need it on a few hours throughout the day."

She also recommends never confining a pet in a small space with a diffuser, or placing a diffuser near their cage.

McIntyre emphasized that the quality and sourcing of the oils is really important: Even if an oil is diffused in the air, it is still entering the body of humans and animals, she said.

Unless an oil is marked specifically as "ready to use" for animals, all oils should be diluted using at least 10 drops of carrier oil (organic fractionated coconut oil, for example) to one drop of essential oil.

Some of the most common blends by AnímálEO that she uses include Calm-a-Mile, a blend of calming herbs, lavender and chamomile. For animals debilitated by age, she suggests the "Boost in a Bottle" blend for dogs and "Kitty Boost" for cats. AnímálEO also makes an ingestible blend for arthritis called "Any-Itis" (a very rare example of an ingestible oil), as well as "New Mobility" for musculoskeletal issues.

Overall, most of McIntyre's clients use oils in a diffuser for respiratory, antiviral and behavior issues. Some may use Young Living's "Thieves" or DoTerra's "On Guard" in diffusers with their animals before traveling when they may be exposed to viruses and bacteria.

For those wanting to learn more about safely using their own oils with their pets, McIntyre recommends the book, "Animal Desk Reference: Essential Oils for Animals," by the holistic veterinarian Dr. Melissa Shelton, founder of AnímálEO.

McIntyre also recommended locals visit Bernadette Hartman, a veterinarian and intuitive animal healer who has office hours in Bend and offers one-on-one sessions with people and their pets.