Are We Next? | The Source Weekly - Bend, Oregon

What local, state and federal governments are doing to protect Deschutes County from wildfire

With 10% of the people in Oregon under some type of evacuation order, and roughly 1 million acres burned throughout the state, there's plenty of reason to believe that out-of-control wildfires could reach Bend in the coming years. 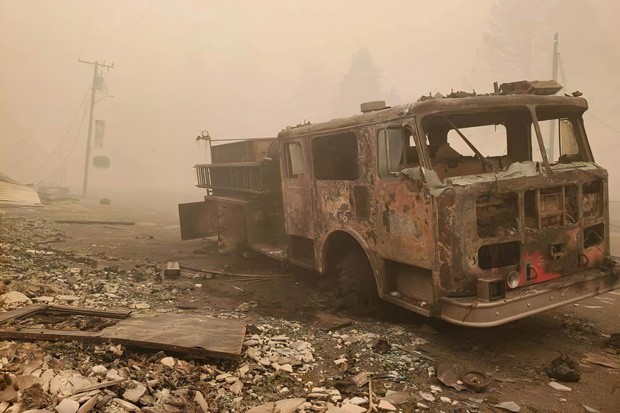 While the future is impossible to predict, Central Oregon may be more protected than other parts of the state and California. The unique geography of the region, the collaborative work of wildfire prevention experts and the strict urban growth boundary combine to give Bend a fighting chance to withstand the devastation of wildfire destruction in the years to come.

The unique geography of frequent wildfire

Throughout much of the 1900s, and for millennia before, the forest around Bend was wide open, dotted with huge trees and a grassy understory, explained Ed Keith, the county forester for Deschutes County. A wildfire would come through every five to 20 years, destroying all the smaller trees, Keith said. This kept the forest thin, and provided more nutrients for the larger ponderosa pines, which evolved with fire-resistant bark as they grew older.


Decades of logging, combined with aggressive suppression of wildfires, made the region much more vulnerable to fire. Centuries of natural cycles were thrown out of balance.

One way to manage this risk is to try to restore the historical resiliency of nearby forests, using low-intensity fires on a frequent basis, Keith said.

This is the goal of the Deschutes Collaborative Forest Project, a diverse group of people in Central Oregon who are strongly connected to the fate of the forest. First assembled in 2009 to garner federal support, it's primarily guided by a 19-member steering committee made up of academics, environmentalists, logging company execs, local elected leaders, the county forester and many others.

So far, the federal government has provided $10.1 million for forest thinning and controlled burns throughout Central Oregon, and it just asked for $8 million more, Keith said. The group prioritized projects that protect both developed areas as well as recreational amenities such as the Deschutes River Trail and Phil's Trail, according to its website. 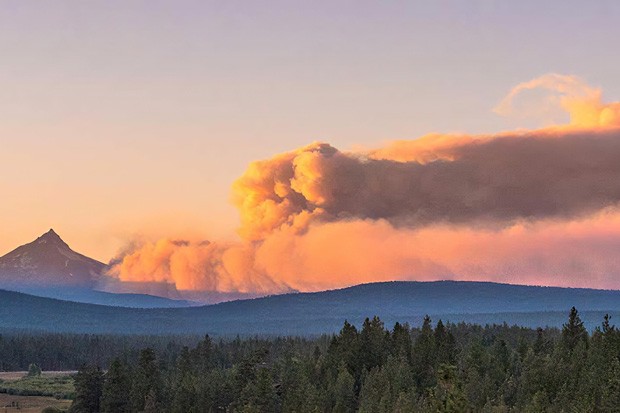 The Rosland Road Fire near La Pine was a recent success story of a similar forest treatment effort by the Greater La Pine Joint Chiefs Cohesive Strategy Project. The fire started in an untreated area and the underbrush and dense trees fueled a huge conflagration. It spread rapidly until it reached an area that was intentionally thinned and cleared. The fire dropped to the ground and was soon contained and put out, Keith explained.

"We might be one of the most collaborative places in the state, with people willing to work together that have a different view," Keith said. "Part of that is urgency; if we have a wildfire, no one wins."

Keith spends the bulk of his time as county forester educating people in Deschutes County about how to protect their homes from wildfires.

"We use research on why homes are lost during wildfire," Keith said. "We try to create a defensible space around the house which includes removing everything flammable—from shrubs and brush, to firewood close to the home, to thinning trees. Home loss is usually due to embers that fall on the home and yard, not a wall of fire."

“We might be one of the most collaborative places in the state, with people willing to work together that have a different view. Part of that is urgency; if we have a wildfire, no one wins”—Ed Keith, Deschutes County Forester tweet this

Until fairly recently, many houses in Deschutes County had roofs made of untreated cedar shingles: This construction was even required in some subdivisions for the "woodsy" look, Keith explained. The Deschutes County Board of Commissioners finally outlawed wood roofs in 2001 when it declared the county a wildfire hazard zone. Today, most wood roofs have aged out and been replaced with fire resistant or treated roofs, Keith said.

Many of the 22 homes burned in the Awbrey Hall Fire of 1990 were covered with cedar shingles, Keith said.

Another thing that protects Central Oregon from mass destruction is state land use policy, which prevents cities from expanding endlessly into wildlands. Partially thanks to the work of Oregon Gov. Tom McCall in the 1970s, when a city does want to expand, it must undergo a lengthy review process with the state. California, in contrast, has land use policy which allowed fast-growing cities to sprawl out into hillsides and canyons where homes are exposed to wildfires. These areas are called the wildland-urban interface, or the WUI.

Bend has its own recent example of a WUI called Skyline Forest: It's a 33,000-acre tract of timberland located between Bend and Sisters, north of Skyliners Road (the road leading up to Tumalo Falls). In the past, the City of Bend has tried to expand into this region so developers could build many houses on small parcels of land: Its most recent proposal in 2009 was denied by the state. This is partially thanks to the work of Central Oregon LandWatch, which created the Westside Transect Zone, a natural buffer between Shevlin Park (Tumalo Creek) and nearby developments. The goal was to both protect houses from fire while preserving the surrounding forest in its natural state. 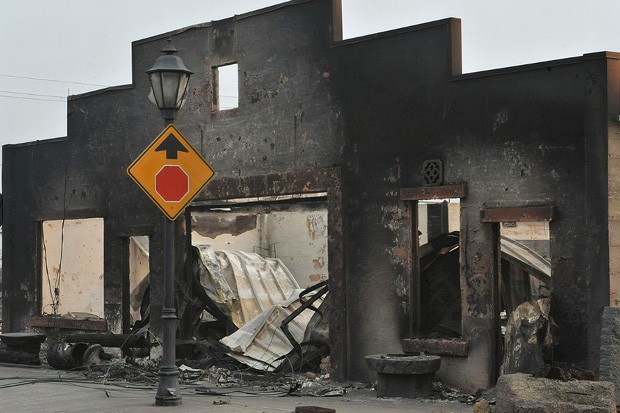 Meanwhile, the Deschutes Land Trust has been trying to buy the Skyline Forest property for years to permanently protect it, explained Deschutes Land Trust Founding Director Brad Chalfant. The investor from China who owns the land is not interested in selling it for a lowered price for preservation purposes right now, Chalfant said, but the owner has allowed people to recreate on it.

In Central Oregon, people likely suffered through one of the worst weekends for air quality in history, with Bend and nearby towns above an Air Quality Index of 500 from Friday through the time this story went to press. As of Monday morning, nearly 250 wildfire refugees have come to Central Oregon and are being cared for by the Red Cross Cascades Region, according to Kristine McConnell, VP of industry relations for Visit Central Oregon.


While wildfire risk remains high in the region, local governments recognized this decades ago and changed building codes and provided funding to support wildfire mitigation efforts in Central Oregon. From the collaborative work of the DCFP to local volunteers who help inspect homes for fire danger, local, state and federal governments are working to help keep the community safe.

"Part of our success is that because the region experienced fire on a regular basis, there's more urgency, it's on people's minds" said Keith, the county forester.

"I do think it's true that we've done more work in and around our community and in the national forest to prevent fires than probably anywhere in the state."